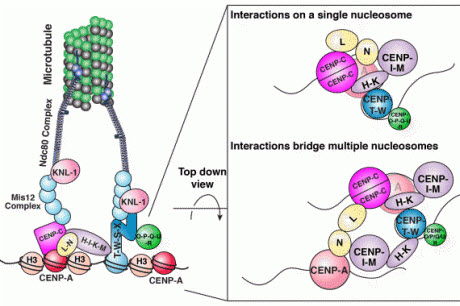 “The CCAN forms the critical connection between the DNA and the segregation machinery,” says Whitehead Member Iain Cheeseman. “Learning about its organization can tell us how it targets specifically to the right part of the chromosome–the centromere–and the properties that underlie its role in kinetochore stability.”

To study the CCAN organization, Kara McKinley, a graduate student in the Cheeseman lab, used the CRISPR-Cas9 genome editing system to conditionally knock out each subunit and also to introduce tags that cause the cell to chew up a given subunit upon addition of a drug. Previous research had relied on RNAi and other methods to knock down the proteins’ expression, but none achieved the clean removal of the individual CCAN subcomplexes that is necessary for deciphering their position and function. In parallel, by studying all sixteen CCAN proteins biochemically, McKinley was able to refine the relationships seen in cells and establish how each individual subcomplex touches the others. The results of this work are published online this week in the journal Molecular Cell.

“The surprise was that each subcomplex needs to touch many other subcomplexes to be functional – they’re connected in a mesh, not a chain,” says McKinley. “This property is crucial for building a stable structure for kinetochore assembly.”

According to McKinley, this meshwork model helps explain other information about the CCAN. For example, the authors found that the connections between the subcomplexes help the CCAN tolerate the changes it is exposed to throughout the cell cycle. In addition, previous work in the field has indicated that these proteins are important in resisting the forces that pull on the kinetochore during chromosome segregation; the interconnected framework of interactions that the authors define is better able to withstand force than is a linear bridge.

The structure could also explain where and how kinetochores form. The histone protein CENP-A is the epigenetic mark for centromeres, but CENP-A nucleosomes can be sparsely integrated throughout the chromosome without recruiting a kinetochore. The authors hypothesize that the CCAN framework that they defined may span two or more CENP-A molecules when it creates a foundation for the kinetochore. Such crosslinking would only possible at high concentrations of CENP-A, as is true at the centromere.