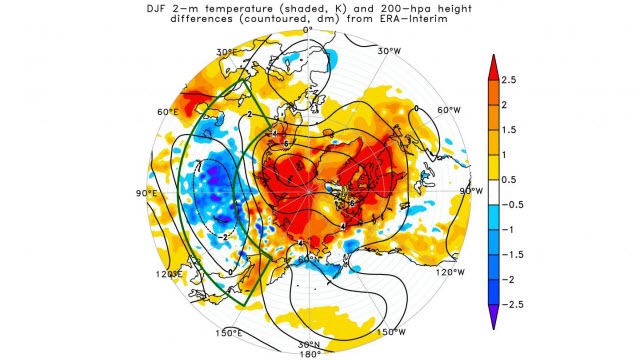 Observations of the Arctic sea ice have shown that Arctic sea ice has been melting at a fast pace over the last few decades. However, what is more uncertain and presently undergoing a big debate is how these sea ice changes are (or are not) impacting weather patterns in non-Arctic regions. One particular topic of interest has been the recent cooling of winter (DJF: December through February) temperatures over the Eurasia region and whether or not sea ice loss is playing a role.

A recent study published in Advances in Atmospheric Sciences by scientists from INNOVIM and NOAA/NCEP Climate Prediction Center looks at atmospheric simulations of near surface (2-m above ground level) temperatures from the National Centers for Environmental Prediction (NCEP) Climate Forecast System version 2 (CFSv2) model configured with different sea ice concentration (SIC) and sea surface temperature (SST) conditions. The model used is the atmosphere component so it does not simulate ocean parameters like sea ice or SST, which need to be prescribed (known as boundary conditions). They used SIC and SST from an early period (1981-1990), SIC1 and SST1, and a later period (2005-2014), SIC2 and SST2. In the later period, sea ice is less and SSTs are warmer than in the early period. They want to answer the question: do the simulations with less sea ice or warmer SSTs produce the cooler temperatures seen over Eurasia in the last decade, or could this just be some chaotic variation of the climate system that will eventually even itself out?

"If we change both the sea ice and SSTs to the later period, we actually get a large amount of warming in the winter over Eurasia." says the research team. Most of this warming is seen when just SSTs are changed as well, with little role from sea ice changes in producing the warming.

Analysis of historical coupled (ocean and atmospheric variables are simulated) CFSv2 model simulations covering the same time periods shows that the expanse of Eurasian warming becomes larger with increasing leads. "Our results demonstrate that the recent cooler temperature trends may simply be a consequence of random, chaotic variability of the atmosphere, and a warming trend may eventually resume," the team concludes.