KNOXVILLE, TN — In the tropics and subtropics, families and communities frequently rely on bushmeat for food security as well as basic income. So, while the harvest and trade of wildlife are illegal in many locales, the practice is commonplace, and with it comes the potential for transmission of a zoonotic disease among human populations.

Even before the emergence of COVID-19, public health experts have been on alert for more information about the attitudes and practices of those who trade in and consume bushmeat. Depending on the wildlife species involved—baboons, bats, hippopotamus, various monkeys, and more—hunting, preparing, and consuming bushmeat can carry with it the potential to contract and spread diseases such as the widely feared Ebola virus or the more widespread, and perhaps more economically devastating, bacterial infections caused by Escherichia coli (E. coli), Salmonella, Staphylococcus, and others. The scientists theorize that if we can help bushmeat traders and consumers keep themselves safe, perhaps we can keep their communities safe, too. 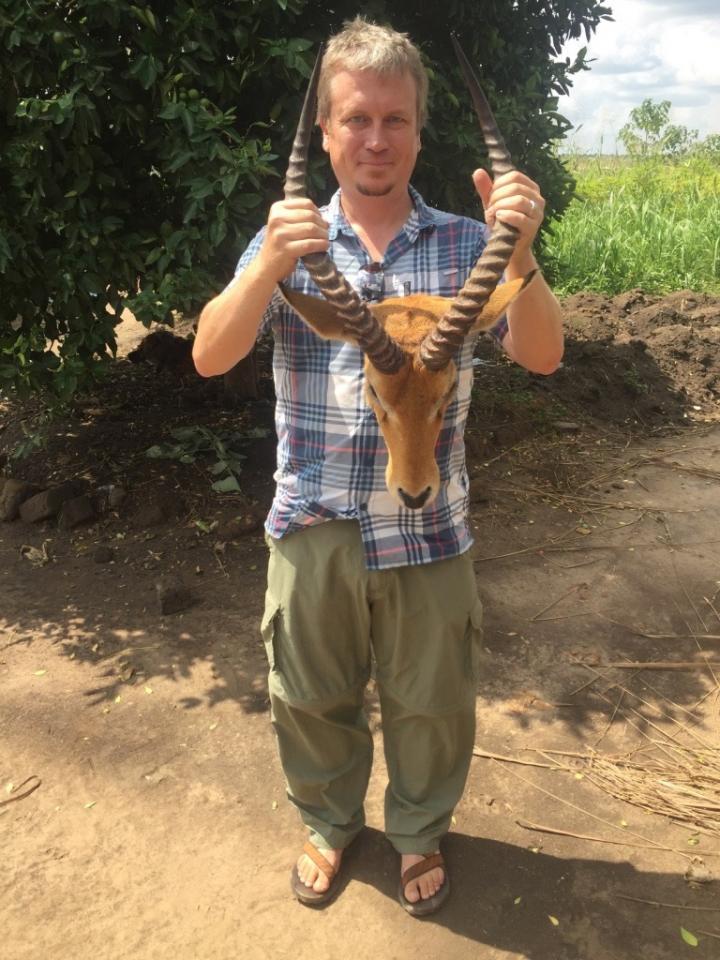 Antelope species are among the most acceptable and most harvested animals in the bushmeat market. Adam Willcox, University of Tennessee research associate professor, displays an antelope head from a recently harvested Ugandan kob by hunters in a community adjacent to Uganda's Murchison Falls National Park.
Robert Omara

To do that, you have to understand the practitioners.

A recent paper published in the journal PLOS ONE outlines how researchers with the University of Tennessee College of Veterinary Medicine and Department of Forestry, Wildlife and Fisheries, measured the attitudes, practices, and zoonoses awareness among community members associated with the bushmeat trade in northern Uganda. The authors, BreeAnna Dell and Marcy Souza, both DVMs and public health experts, along with Adam Willcox, a research associate professor who specializes in the human dimensions associated with natural resources, interviewed 292 women from the region who cook for their households and 180 self-identified hunters from 21 villages bordering Uganda's Murchison Falls National Park. The scientists were working to gain insights into bushmeat preferences, opportunities for pathogen transmission, and awareness of common wildlife-associated zoonoses.

Among their findings, they report that both hunters and, traditionally, the women who cook the meat consider primates to be the most likely wildlife species to carry diseases that humans can catch. Among common zoonotic pathogens, both groups believe that pathogens causing stomachache or diarrhea and monkeypox can be transmitted by wildlife. Neither the women who cook nor the hunters report being frequently injured during cooking, butchering, or hunting, and few report taking precautions while handling bushmeat.

"Based on responses to our questions about diseases that wildlife carry, almost all respondents were aware that there is a real and present risk of disease spillover from wildlife to people," the authors conclude. Further, they write, "Epidemics in recent years may contribute to this knowledge, but for hunters this awareness does not appear to influence or motivate any precautionary behaviors during the harvest of wildlife, as virtually no respondents reported taking precautions." In fact, financial gain was the hunters' primary motivation. 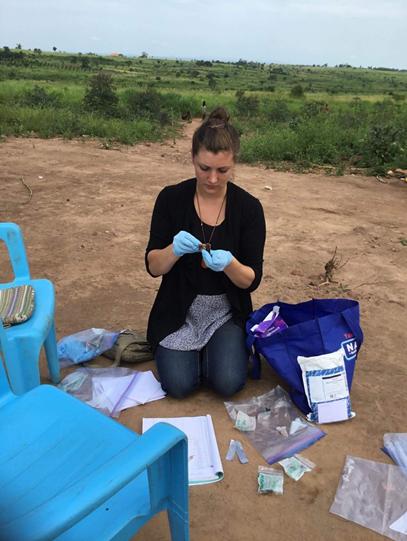 Bree Dell, DVM and PhD candidate with the University of Tennessee College of Veterinary Medicine, excises bushmeat tissue in the field for preservation and subsequent genetic analysis to identify the species of bushmeat and assess viral and bacterial microbial diversity.
Julie Claire Akwongo, Veterinaires Sans Frontieres, Germany. Used with permission

In an unexpected twist, the survey results reveal that the majority of women who cook believe that hunters and dealers never or rarely disguise primate meat as another kind of meat in the marketing process. However, the majority of hunters report that they usually disguise primate meat as another kind of meat. The women overwhelmingly report they prefer to avoid purchasing primate meat. "Primates, rodents, and bats have long been investigated as important groups in zoonotic spillover events," says Dell. "While rodents and bats demonstrate high species diversity within their groups that contributes to their high microbial diversity, primates are closely related to humans and are believed to share many pathogens with humans, facilitating transmission. These findings raise concerns, as the ability of cooks to know and assess the risks of handing primate meat is subverted through the disguise of these species in the market."

These data, and more outlined in the paper including perceptions of disease prevalence and transmission as well as hunting and marketing practices, help clarify where hunters and cooks are most susceptible to injury and exposure to infectious agents.

"Expanding our knowledge of awareness, perceptions, and risks enables us to identify opportunities to mitigate infections and injury risk and promote safe handling practices," comments Dell. What's more, Souza says advancing the knowledge of community practices may assist public health officials as they work to help communities and individuals mitigate their own disease risk.

Willcox adds that the data may ultimately lead to the development of more successful and appropriate conservation tactics for wildlife species in general and specifically in Uganda's Murchison Falls National Park.