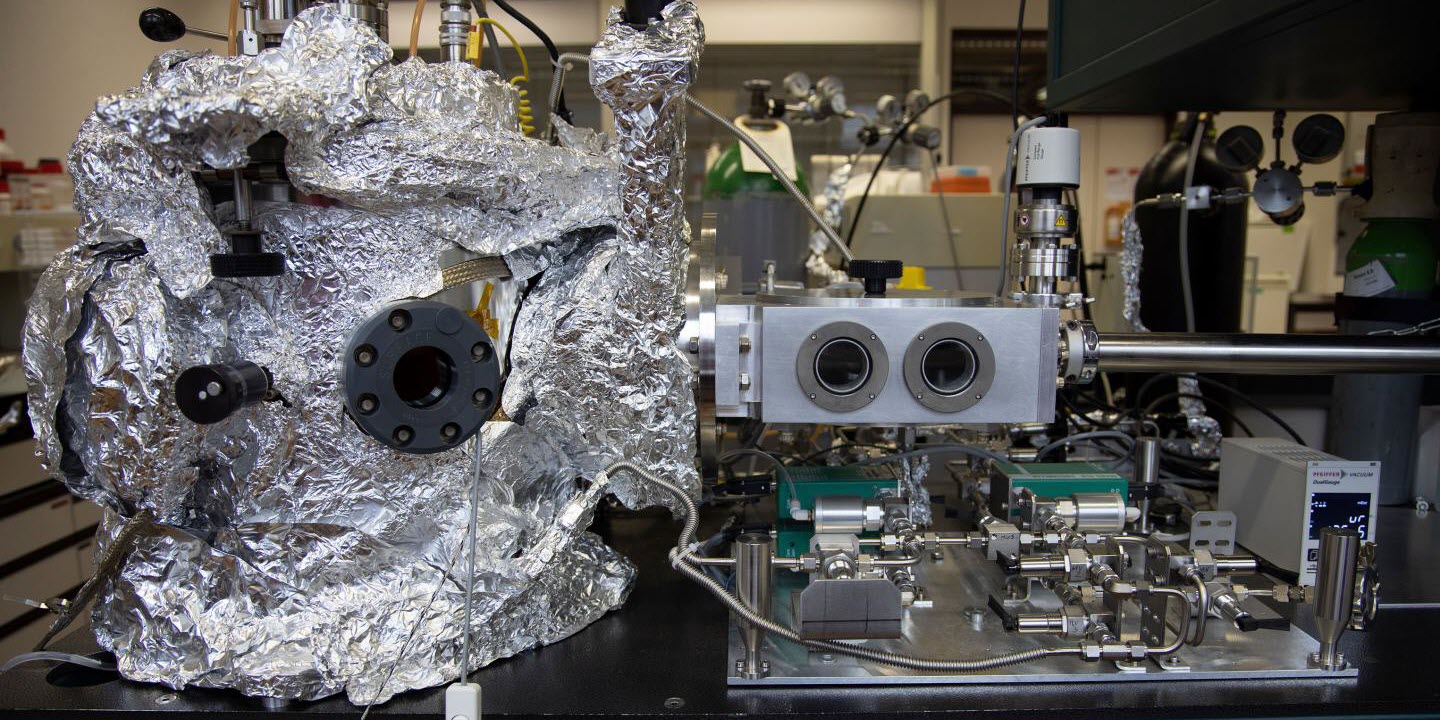 Many of us may still be familiar with the simple physical principles of magnetism from school. However, this general knowledge about north and south poles quickly becomes very complex when looking at what happens down to the atomic level. The magnetic interactions between atoms at such minute scales can create unique states, such as skyrmions.

Skyrmions have very special properties and can exist in certain material systems, such as a "stack" of different sub-nanometer-thick metal layers. Modern computer technology based on skyrmions - which are only a few nanometers in size - promises to enable an extremely compact and ultrafast way of storing and processing data. As an example, one concept for data storage with skyrmions could be that the bits "1" and "0" are represented by the presence and absence of a given skyrmion. This concept could thus be used in "racetrack" memories (see info box). However, it is a prerequisite that the distance between the skyrmion for the value "1" and the skyrmion gap for the value "0" remains constant when moving during the data transport, otherwise large errors could occur.

As a better alternative, skyrmions having different sizes can be used for the representation of "0" and "1". These could then be transported like pearls on a string without the distances between the pearls playing a big role. The existence of two different types of skyrmions (skyrmion and skyrmion bobber) has so far only been predicted theoretically and has only be shown experimentally in a specially-grown monocrystalline material. In these experiments, however, the skyrmions exist only at extremely low temperatures. These limitations make this material unsuitable for practical applications.

The research group led by Hans Josef Hug at Empa has now succeeded in solving this problem: "We have produced a multilayer system consisting of various sub-nanometer-thick ferromagnetic, noble metal and rare-earth metal layers, in which two different skyrmion states can coexist at room temperature," says Hug. His team had been studying skyrmion properties in ultra-thin ferromagnetic multilayer systems using the magnetic force microscope that they developed at Empa. For their latest experiments, they fabricated material layers made from the following metals: iridium (Ir), iron (Fe), cobalt (Co), platinum (Pt) and the rare-earth metals terbium (Tb) and gadolinium (Gd).

The researchers adjusted the mixing ratio of the two metals Tb and Gd and the thicknesses of the TbGd and Co layers in the central layer in such a way that its magnetic properties can be influenced by the outer layers: the ferromagnetic layers "force" skyrmions into the central ferrimagnetic layer. This results in a multilayer system where two different types of skyrmions exist.

The two types of skyrmions can easily be distinguished from each other with the magnetic force microscope due to their different sizes and intensities. The larger skyrmion, which also creates a stronger magnetic field, penetrates the entire multilayer system, i.e. also the middle ferrimagnetic multilayer. The smaller, weaker skyrmion, on the other hand only exists in the two outer multilayers. This is the great significance of the latest results with regard to a possible use of skyrmions in data processing: if binary data—0 and 1—are to be stored and read, they must be clearly distinguishable, which would be possible here by means of the two different types of skyrmions.

Using the magnetic force microscope, individual parts of these multilayers were compared with each other. This allowed Hug's team to determine in which layers the different skyrmions occur. Furthermore, micromagnetic computer simulations confirmed the experimental results. These simulations were carried out in collaboration with theoreticians from the universities of Vienna and Messina.

Empa researcher Andrada-Oana Mandru, the first author of the study, is hopeful that a major challenge towards practical applications has been overcome: "The multilayers we have developed using sputtering technology can in principle also be produced on an industrial scale," she said. In addition, similar systems could possibly be used in the future to build three-dimensional data storage devices with even greater storage density. The team recently published their work in the renowned journal Nature Communications.

The concept of such a memory was designed in 2004 at IBM. It consists of writing information in one place by means of magnetic domains—i.e. magnetically aligned areas—and then moving them quickly within the device by means of currents. One bit corresponds to such a magnetic domain. This task could be performed by a skyrmion, for example. The carrier material of these magnetic information units are nanowires, which are more than a thousand times thinner than a human hair and thus promise an extremely compact form of data storage. The transport of data along the wires also works extremely fast, about 100,000 times faster than in a conventional flash memory and with a much lower energy consumption.

- This press release was originally published on the Empa website. It has been edited for style