The National Center for Science and Engineering Statistics (NCSES) at the National Science Foundation has released a new report outlining the most recent statistics on employment and education of women, minorities, and people with disabilities among science and engineering (S&E) fields.

The Women, Minorities, and Persons with Disabilities in Science and Engineering report is produced every two years. “Its primary purpose is to serve as a statistical abstract with no endorsement of or recommendations about policies or programs,” states the NCSES site.

Data from the report are categorized into the following areas: enrollment, field of degree, employment status, and occupation. It compares trends and changes within these categories for women, persons with disabilities, and minorities from three racial and ethnic groups—Black or African American, Hispanic or Latino, and American Indian or Alaska Native. As the report points out, women, persons with disabilities, and minorities tend to have less representation in S&E fields than the US population, which is why it is important for leaders in S&E fields to be aware of the current enrollment and employment statistics and how their organization matches up.

"Ensuring accessibility and inclusivity in STEM is essential to cultivate a robust US science and engineering enterprise," says Sethuraman Panchanathan, NSF director. “This report provides useful information that helps us understand where we are and where we need to go. We must continue to work collaboratively for inclusive change that results in a STEM workforce that reflects the population of our nation.”

Key takeaways from the report demonstrated signs of progress over the last decade, and areas that US organizations can still improve when it comes to education and employment opportunities for underrepresented groups.

There were numerous high notes for those in academia hoping to pursue a career in S&E fields—over the past decade, both the share and number of science and engineering degrees given to underrepresented minorities increased. Additionally, as of 2018, women earn about half of bachelor’s degrees in S&E fields, and 41.2 percent of doctorate degrees. Women still appear to favor certain fields, though. For example, psychology and biological sciences, as well as agricultural sciences see higher shares of women earning degrees, while computer sciences and engineering remain among the lowest shares of women earning degrees.

Both the share and number of S&E degrees awarded to underrepresented minorities (Hispanics or Latinos, Blacks or African Americans, and American Indians or Alaska Natives)—increased over the past decade. The report also showed that minorities hold a larger share of academic positions now, but there’s still room for improvement, as the share is just 8.9 percent.

The most frequently reported disabilities are hearing issues and cognitive difficulty.

Report results show that women are still earning less in annual salaries than men, even in S&E fields that are dominated by women, such as psychologists. Overall, in 2019, women’s median annual salary was $70,000, whereas the median salary for men was $95,000. Men also hold more supervisory roles than women (44.4 percent versus 32.7 percent).

Depending on specific occupations, salaries vary widely across racial and ethnic groups. The report notes that Asian scientists and engineers had the highest average salary in S&E occupations, at $104,000. Whites and other racial groups had similar average salaries (between $90,000-$95,000), while underrepresented minorities had the lowest, with $80,000 average salary. 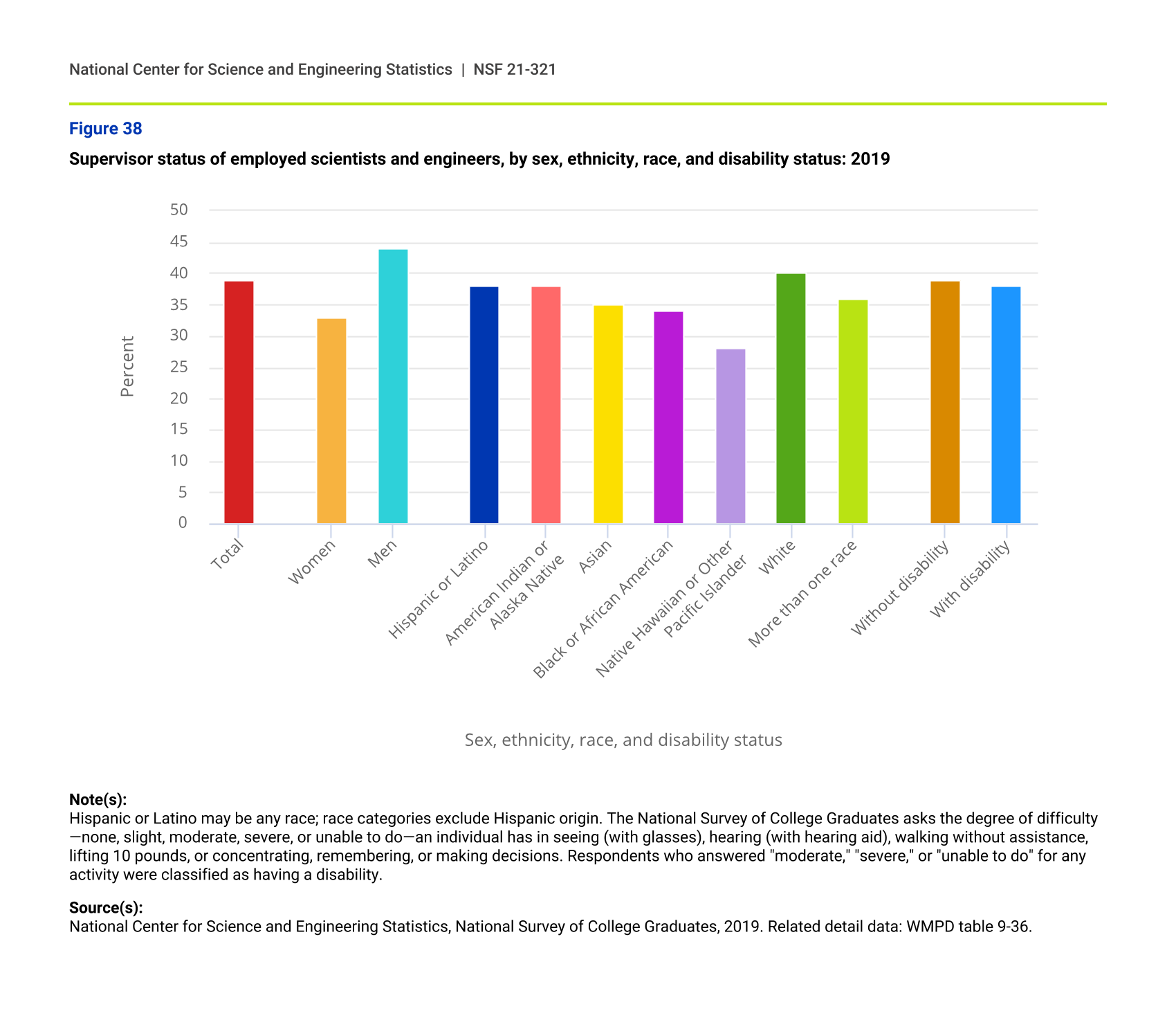 The report authors did acknowledge one potential factor in the salary discrepancies, noting that Hispanics or Latinos and Black or African Americans have large shares of degrees in psychology, social sciences, and biological and agricultural sciences, which all have lower median salaries than do occupations in computer or information science or in engineering, both of which had higher representation of Asians.

However, scientists and engineers who are White reported holding a supervisory role more frequently than did other races and ethnicities.

An emphasis on inclusion and equity within the US S&E workforce throughout recent years is showing positive results, with growth in some areas of employment and education for underrepresented groups. However, efforts to recognize the benefits of diversity should continue to be a top priority for leaders in the workplace. Those in supervisory roles can seek out ways to identify potential sources of unconscious bias, or reevaluate how they conduct performance reviews with staff, to determine if they may be overlooking individuals who deserve a promotion.

The next report, to be released in 2023, will include data collected during the COVID-19 pandemic, and will feature questions about the pandemic’s impact on science professionals’ work.