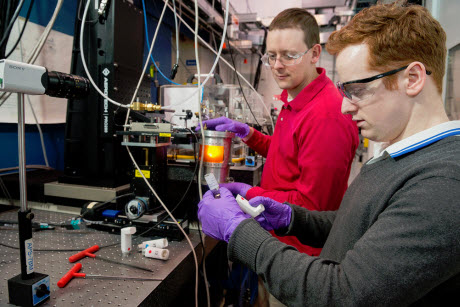 Argonne researcher Alan Kastengren, left, and principal investigator Dan Duke, work with spray inhalers at an Advanced Photon Source beamline. The researchers have teamed with scientists in Australia and Italy to study the complex inner workings of spray inhalers, using techniques developed for investigation of engine fuel injectors. Duke and Kastengren hope the knowledge gained from the project will lead to improved inhalers that can be used with a wider variety of drugs.Argonne National LaboratoryThere is a world of difference between tailpipes and windpipes, but researchers at the U.S. Department of Energy’s Argonne National Laboratory have managed to link the two with groundbreaking research that could enable exciting advances in prescription drug delivery devices.

In collaboration with Australian researchers, Argonne’s scientists are using decades of experience analyzing vehicle fuel injectors to study medical inhalers, hoping to unlock the secrets of the devices that are so well known to asthma sufferers everywhere.

“Fuel injectors and inhalers operate on the same principles of fluid dynamics, so it was natural to apply these techniques to a new area of research that could have great benefit for patients,” said Daniel Duke, principal investigator on the project. “We think this research will greatly expand our understanding of what goes on in an inhaler, allowing for the creation of better devices.”

The researchers hope their work leads not only to better devices, but to inhalers that can be used with whole new classes of drugs that are currently injected through a needle or applied as gels. Inhalation could make delivery of those drugs much easier for patients.

Duke began working on inhaler research in 2013 at Monash University in his native Australia. Researchers from Monash’s Laboratory for Turbulence Research in Aerospace & Combustion were working with the Woolcock Institute of Medical Research in Sydney and Chiesi Farmaceutici S.p.A. to study the fluid dynamics of medical inhalers.

Duke’s experience at Argonne, where he studied fuel sprays on a Fulbright Scholarship, led him to suggest collaboration with the Chicago-area lab to gain a further understanding of what goes on inside the sprays created by inhalers.

Inhalers use a complicated interaction of chemistry, physics and thermodynamics to deliver drugs into the lungs of patients. Inside the canister, the drug is suspended in a tiny chamber with a cosolvent and a liquid propellant. When the canister is depressed, the chamber opens to the outside, the propellant flash boils, and the pressure shoots a precisely controlled volume of mixture out of the chamber through a nozzle and into the patient’s mouth. As the spray expands, the cosolvent evaporates, until only droplets of the medication remain suspended in air to move through the trachea and into the lungs.

The challenge is to get those droplets exactly the right size and with the right distribution. Too small, and the droplets hang in the air, milling around in the lungs until being exhaled without settling on the surface of the alveoli (air sacs) and delivering the medication. Too large, and the droplets won’t remain suspended in air long enough to make it deep into the lungs, instead coating the mouth and trachea where the drug is not effectively absorbed.

Drug makers currently rely on a trial-and-error process that uses simplified predictions to change input variables, such as the type and amounts of propellants or cosolvents, to adjust the output droplet size. Without a fundamental understanding of what goes on inside the spray, creating a better inhaler relies on too much guesswork.

Conventional techniques can see inside the spray cone inches from the nozzle, once it has dispersed enough to become translucent, but this only reveals the result of the spray and tells very little about the process that created it. All the action – multiple phase changes and complex thermodynamic effects – occurs inside the nozzle and in the first few millimeters of the spray, where things are too dense to see.

So the Argonne researchers used brilliant X-rays from the world’s only dedicated fuel-injection beamline at the Advanced Photon Source, a DOE user facility, to peer into the inner workings of complex sprays. The intense X-rays from APS enable penetration of highly dense sprays while providing unprecedented detail of the spray breakup process. The researchers gained more insight by using a drug that fluoresces in the presence of X-rays, which allowed them to measure how well the active drug was distributed in the spray.

The results are still being analyzed by the researchers in Australia and at Argonne, but a few surprising developments stood out immediately. The predictions of what should be going on inside the spray – based on standard thermodynamic models – did not always correlate to the observed result.

For example, thermodynamics seems to dictate that the spray should behave the same way during every use. But the research showed a higher variability than expected in the turbulent structure of the spray. Researchers also found the sprays themselves were less dense than had been previously predicted.

Duke said increased understanding of inhalers could open up whole new approaches to delivering drugs. A better-designed inhaler could mean drugs that require very precise and repeatable dosages, such as insulin for diabetics, could be delivered through an inhaler. Current inhalers are not always suitable to deliver these types of drugs because variations in the spray patterns can make them inappropriate for drugs that require tiny, precise doses.

A new generation of inhalers could also mean more accurate delivery of drugs to patients whose lungs are impaired due to disease or aging, without the need for modifications to the device.

“Part of the objective is simply gaining a better understanding of the basic science behind these very common devices, but there is also a very practical gain that could be realized through this research,” Duke said. “A more effective spray device could be a real game-changer for medicine.”

The spray research is being conducted at Argonne in coordination with Professor Damon Honnery from Monash University's Laboratory for Turbulence Research in Aerospace & Combustion, Professors Paul Young and Daniela Traini from the Respiratory Technology Group at the Woolcock Institute of Medical Research in Sydney, and Dave Lewis of Chiesi Farmaceutici S.p.A. Honnery, Young and Traini are funded by the Australian Research Council.