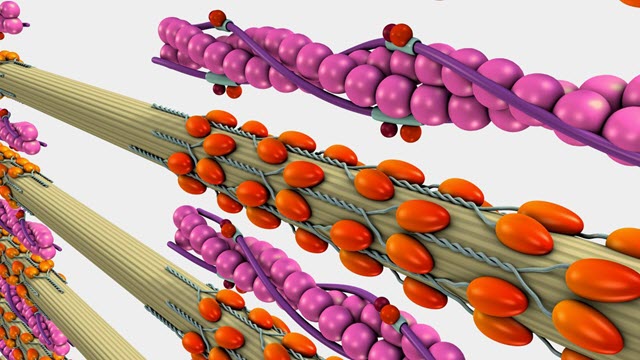 Army researchers are on a mission to understand the value of the molecular 'living' functionality of muscle, and the fundamental mechanics that would need to be replicated in order to artificially achieve the capabilities arising from the proteins responsible for muscle contraction.Credit: US Army-Shutterstock

In an effort to make robots more effective and versatile teammates for soldiers in combat, Army researchers are on a mission to understand the value of the molecular living functionality of muscle, and the fundamental mechanics that would need to be replicated in order to artificially achieve the capabilities arising from the proteins responsible for muscle contraction.

Bionanomotors, like myosins that move along actin networks, are responsible for most methods of motion in all life forms. Thus, the development of artificial nanomotors could be game-changing in the field of robotics research.

Researchers from the US Army Combat Capabilities Development Command's Army Research Laboratory have been looking to identify a design that would allow the artificial nanomotor to take advantage of Brownian motion, the property of particles to agitatedly move simply because they are warm.

The CCDC ARL researchers believe understanding and developing these fundamental mechanics are a necessary foundational step toward making informed decisions on the viability of new directions in robotics involving the blending of synthetic biology, robotics, and dynamics and controls engineering.

The Journal of Biomechanical Engineering recently featured their research.

"By controlling the stiffness of different geometrical features of a simple lever-arm design, we found that we could use Brownian motion to make the nanomotor more capable of reaching desirable positions for creating linear motion," said Dean Culver, a researcher in CCDC ARL's Vehicle Technology Directorate. "This nano-scale feature translates to more energetically efficient actuation at a macro scale, meaning robots that can do more for the warfighter over a longer amount of time."

According to Culver, the descriptions of protein interactions in muscle contraction are typically fairly high-level. More specifically, rather than describing the forces that act on an individual protein to seek its counterpart, prescribed or empirical rate functions that dictate the conditions under which a binding or a release event occurs have been used by the research community to replicate this biomechanical process.

"These widely accepted muscle contraction models are akin to a black-box understanding of a car engine," Culver said. "More gas, more power. It weighs this much and takes up this much space. Combustion is involved. But, you can't design a car engine with that kind of surface-level information. You need to understand how the pistons work, and how finely injection needs to be tuned. That's a component-level understanding of the engine. We dive into the component-level mechanics of the built-up protein system and show the design and control value of living functionality as well as a clearer understanding of design parameters that would be key to synthetically reproducing such living functionality."

Culver stated that the capacity for Brownian motion to kick a tethered particle from a disadvantageous elastic position to an advantageous one, in terms of energy production for a molecular motor, has been illustrated by ARL at a component level, a crucial step in the design of artificial nanomotors that offer the same performance capabilities as biological ones.

"This research adds a key piece of the puzzle for fast, versatile robots that can perform autonomous tactical maneuver and reconnaissance functions," Culver said. "These models will be integral to the design of distributed actuators that are silent, low thermal signature and efficient—features that will make these robots more impactful in the field."

Culver noted that they are silent because the muscles don't make a lot of noise when they actuate, especially compared to motors or servos, cold because the amount of heat generation in a muscle is far less than a comparable motor, and efficient because of the advantages of the distributed chemical energy model and potential escape via Brownian motion.

According to Culver, the breadth of applications for actuators inspired by the biomolecular machines in animal muscles is still unknown, but many of the existing application spaces have clear Army applications such as bio-inspired robotics, nanomachines and energy harvesting.

"Fundamental and exploratory research in this area is therefore a wise investment for our future warfighter capabilities," Culver said.

Moving forward, there are two primary extensions of this research.

"First, we need to better understand how molecules, like the tethered particle discussed in our paper, interact with each other in more complicated environments," Culver said. "In the paper, we see how a tethered particle can usefully harness Brownian motion to benefit the contraction of the muscle overall, but the particle in this first model is in an idealized environment. In our bodies, it's submerged in a fluid carrying many different ions and energy-bearing molecules in solution. That's the last piece of the puzzle for the single-motor, nano-scale models of molecular motors."

The second extension, stated Culver, is to repeat this study with a full 3-D model, paving the way to scaling up to practical designs.

Also notable is the fact that because this research is so young, ARL researchers used this project to establish relationships with other investigators in the academic community.

"Leaning on their expertise will be critical in the years to come, and we've done a great job of reaching out to faculty members and researchers from places like the University of Washington, Duke University, and Carnegie Mellon University," Culver said.

According to Culver, taking this research project into the next steps with help from collaborative partners will lead to tremendous capabilities for future soldiers in combat, a critical requirement considering the nature of the ever-changing battlefield.