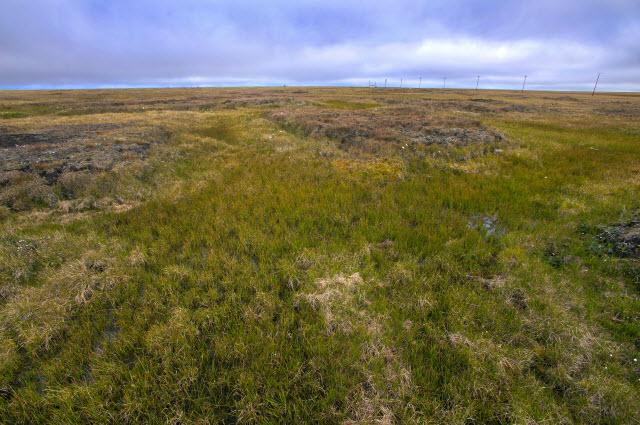 The soil above the Arctic Circle near Barrow, Alaska contains a tremendous amount of carbon. New research may help scientists better predict how much of this carbon will be released as the climate warms.Lawrence Berkeley National LaboratoryHere’s another reason to pay close attention to microbes: Current climate models probably overestimate the amount of carbon that will be released from soil into the atmosphere as global temperatures rise, according to research from the US Department of Energy’s Lawrence Berkeley National Laboratory (Berkeley Lab).

The findings are from a new computer model that explores the feedbacks between soil carbon and climate change. It’s the first such model to include several physiologically realistic representations of how soil microbes break down organic matter, a process that annually unleashes about ten times as much carbon into the atmosphere as fossil fuel emissions. In contrast, today’s models include a simplistic representation of microbial behavior.

The research is published Nov. 17 on the website of the journal Nature Climate Change.

Based on their results, the Berkeley Lab scientists recommend that future Earth system models include a more nuanced and dynamic depiction of how soil microbes go about the business of degrading organic matter and freeing up carbon.

This approach could help scientists more accurately predict what will happen to soil carbon as Earth’s climate changes. These predictions are especially important in vulnerable regions like the Arctic, which is expected to warm considerably this century, and which holds a vast amount of carbon in the tundra.

“We know that microbes are the agents of change when it comes to decomposing organic matter. But the question is: How important is it to explicitly quantify complex microbial interactions in climate models?” says Jinyun Tang, a scientist in Berkeley Lab’s Earth Sciences Division who conducted the research with fellow Berkeley Lab scientist William Riley.

“We found that it makes a big difference,” Tang says. ”We showed that warming temperatures would return less soil carbon to the atmosphere than current models predict.” 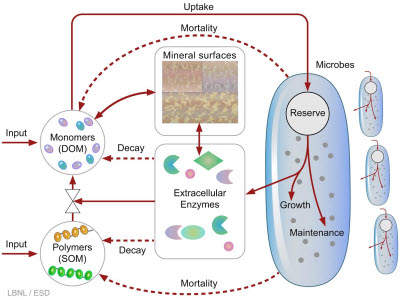 The complex and dynamic livelihood of soil microbes is captured in this schematic. For the first time, these processes are represented in a computer model that predicts the fate of soil carbon as temperatures rise.Lawrence Berkeley National LaboratoryTerrestrial ecosystems, such as the Arctic tundra and Amazon rainforest, contain a huge amount of carbon in organic matter such as decaying plant material. Thanks to soil microbes that break down organic matter, these ecosystems also contribute a huge amount of carbon to the atmosphere.

Because soil is such a major player in the carbon cycle, even a small change in the amount of carbon it releases can have a big affect on atmospheric carbon concentrations. This dynamic implies that climate models should represent soil-carbon processes as accurately as possible.

But here’s the problem: Numerous empirical experiments have shown that the ways in which soil microbes decompose organic matter, and respond to changes in temperature, vary over time and from place to place. This variability is not captured in today’s ecosystem models, however. Microbes are depicted statically. They respond instantaneously when they’re perturbed, and then revert back as if nothing happened.

To better portray the variability of the microbial world, Tang and Riley developed a numerical model that quantifies the costs incurred by microbes to respire, grow, and consume energy. Their model accounts for internal physiology, such as the production of enzymes that help microbes break down organic matter. It includes external processes, such as the competition for these enzymes once they’re outside the microbe. Some enzymes adsorb onto mineral surfaces, which means they are not available to chew through organic matter. The model also includes competition between different microbial populations.

Together, these interactions—from enzymes to minerals to populations­—represent microbial networks as ever-changing systems, much like what’s observed in experiments.

The result? When the model was subjected to a 4 degrees Celsius change, it predicted more variable but weaker soil-carbon and climate feedbacks than current approaches.

“There’s less carbon flux to the atmosphere in response to warming,” says Riley. “Our representation is more complex, which has benefits in that it’s likely more accurate. But it also has costs, in that the parameters used in the model need to be further studied and quantified.”

Tang and Riley recommend more research be conducted on these microbial and mineral interactions. They also recommend that these features ultimately be included in next-generation Earth system models, such as the Department of Energy’s Accelerated Climate Modeling for Energy, or ACME.