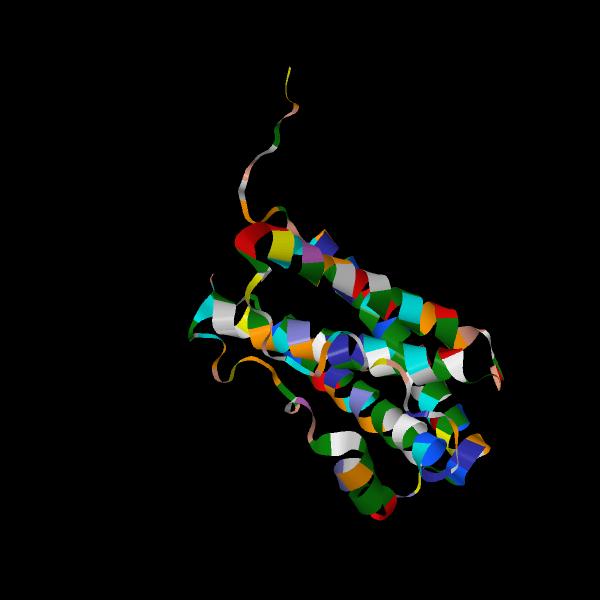 Granulocyte colony-stimulating factor (GCSF), a protein consisting of about 175 amino acids (colors), stimulates the bone marrow to produce neutrophils, a type of white blood cell. Filgrastim is the recombinant DNA analog of GCSF. It is used to ward off infection and anemia in cancer patients.Protein Data BankA first-ever interlaboratory study of four versions of a therapeutic protein drug–all manufactured from living cells–reports that an established analytical tool akin to magnetic resonance imaging reliably assessed the atomic structures of the biologically similar products, yielding the equivalent of a fingerprint for each.

The findings, described today in Nature Biotechnology, demonstrate that the method–known as two-dimensional nuclear magnetic resonance spectroscopy, or 2D-NMR–"can be a robust and powerful complementary technique for companies and regulators" when assessing these biosimilars, said Robert Brinson, a research chemist at the National Institute of Standards and Technology (NIST). This type of assessment is part of a set of comparisons required to determine whether a follow-on biological product is highly similar to an existing product, so that there is no "clinically meaningful" difference between the two.

"Other analytical methods provide useful information, but 2D-NMR is one of the few approaches that can yield complete assignment of three-dimensional structure across the entire molecule in solution at atomic-level resolution," Brinson explains. "Our study indicates that 2D-NMR data can yield a precise and unique 'fingerprint' of structural information in a biological product," he said.

Results were reported for measurements of four independently manufactured versions of filgrastim, a biological drug used to help ward off infection and anemia in cancer patients. At four laboratories, researchers used 2D-NMR to map the atomic structures of the original–or reference–filgrastim product licensed in the U.S. and three unapproved biosimilar versions.

Biosimilar versions of approved biological drugs at the end of their patent life are expected to cost less but be as safe and effective for licensed clinical uses. To date, the FDA has approved one biosimilar (a version of filgrastim), while the European Union has approved about 20 biosimilars over the last 10 years.

Unlike chemically synthesized drugs–aspirin, for example–biological drugs usually are composed of large, complex protein molecules and are produced by living systems. This makes producing exact duplicates impossible, even from batch to batch in the same biomanufacturing process. For specified health conditions and symptoms, the nearly exact copies that result must be shown to achieve the same clinical effects as the already-licensed biological product.

Samples of the four filgrastim products were measured on six NMR instruments made by two manufacturers and distributed across laboratories at NIST, FDA's Center for Drug Evaluation and Research, the Medical Products Agency of Sweden, and Health Canada's Center for Biologics Evaluation.

Each sample of filgrastim–a chain of 175 protein building-blocks known as amino acids--was independently measured in each participating laboratory. Rendered as a complex pattern of peaks corresponding to signals from hydrogen and nitrogen in the sample, the data were gathered on each instrument and then analyzed together. Statistical analyses determined how tightly the signals were clustered when data from all six instruments were superimposed.

Across all samples on all six instruments, measurements hardly varied. The experimentally determined precision limit of 8 parts per billion for the interlaboratory comparison, the researchers write, is "well below" the threshold beyond which structural differences due to mutations, changes in three-dimensional shape, or other causes might be obscured. The atomic structures of all four filgrastim versions were determined to be the same within the tight precision limits of the NMR data.

Separately, NIST researchers repeated measurements on all four samples one year after the interlaboratory comparison to assess their stability. Using the same 2D-NMR method, they did not find significant structural changes in any of the four biologics. NIST's Brinson stresses the importance of proper instrument calibration and control of laboratory conditions to ensure that results are reliable. Early on in the interlaboratory study, the research team identified deviations in data gathered with two instruments. Variations in temperatures were subsequently determined as the cause of the differences, and recalibrated measurements largely eliminated the deviations.

In addition to reporting on the utility of 2D-NMR for high-precision measurement of the detailed atomic structure of biosimilars, the new paper describes statistical methods used to assess biosimilarity. They include one for rapid analysis of many datasets, which can be generated, for example, when monitoring batch-to-batch variation during production.

In the next phase of the work, Brinson says, NIST and collaborators will compare 2D-NMR measurements of a monoclonal antibody--molecules able to bind to specific targets such as cancer cells--that NIST is developing as a reference material.

Monoclonal antibodies are the largest class of approved protein therapeutics in the world, and the ability to extend 2D-NMR methods to this class of therapeutic would represent an important landmark in their analytical characterization. Thirty laboratories on five continents will participate in the upcoming project. Beyond ascertaining the precision of 2D-NMR across a large network of laboratories, the effort is expected to yield a catalog of best practices to ensure the reliability and repeatability of results.