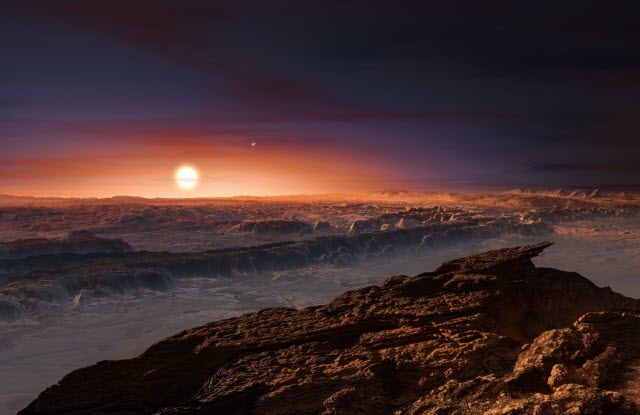 AUSTIN, Texas — An international team of astronomers including Michael Endl of the University of Texas at Austin have found clear evidence of a planet orbiting Proxima Centauri, the closest star to the Sun. The long-sought new world, called Proxima b, orbits its cool red parent star every 11 days and has a temperature suitable for liquid water to exist on its surface. This rocky world is a little more massive than Earth and is the closest known exoplanet to us—and may be the closest possible abode for life outside our solar system. The research was published in the journal Nature on Aug 25.

“We are all convinced that this is a planet,” Endl said, “especially because there’s such a long timeline of data.” Endl researched the star from 2000 to 2008 with Martin Kuerster, now of the Max Planck Institute in Heidelberg, Germany. Their data, combined with more recent efforts, created a 16-year study of Proxima Centauri’s behavior.

Proxima Centauri is a cool red dwarf star located just over four light-years from the Sun, in the constellation of Centaurus. Too faint to be seen with the unaided eye, Proxima lies near the much brighter binary star system Alpha Centauri.

For the first half of 2016, telescopes around the world monitored Proxima Centauri in a coordinated effort called the Pale Red Dot campaign. Led by Guillem Anglada-Escudé from Queen Mary University of London, the astronomers were looking for the tiny back and forth wobble of the star that would be caused by the gravitational pull of an orbiting planet.

The Pale Red Dot campaign data comes from the European Southern Observatory (ESO) 3.6-meter telescope in Chile and other telescopes around the world. This new data was combined with Endl and Kuerster’s earlier study, and others, to reveal a clear signal: At times Proxima Centauri is approaching Earth at about 3 miles per hour (5 kph)—normal human walking pace—and at times receding at the same speed. This regular pattern repeats with a period of 11.2 days.

Careful analysis of this motion indicates the presence of a planet with a mass at least 1.3 times that of the Earth, orbiting about 4.4 million miles (7 million km) from Proxima Centauri—only 5 percent of the Earth-Sun distance.

Red dwarfs such as Proxima Centauri are active stars and can vary in ways that would mimic the presence of a planet. To exclude this possibility, the team also carefully monitored the changing brightness of the star during the campaign using the ASH2 telescope at the San Pedro de Atacama Celestial Explorations Observatory in Chile and the Las Cumbres Observatory telescope network. Data taken when the star was flaring were excluded from the final analysis.

Although Proxima b orbits much closer to its star than Mercury does to the Sun, the star itself is far fainter than the Sun. As a result, Proxima b has an estimated temperature that would allow the presence of liquid surface water and it lies well within the habitable zone around the star.

Despite the temperate orbit of Proxima b, the conditions on the surface may be strongly affected by the ultraviolet and X-ray flares from the star—far more intense than the Earth experiences from the Sun.

Endl suggested that if Proxima b is found to transit across the face of its star, he would like to study it in the near future with the Giant Magellan Telescope, which may be able to tease out the composition of the planet’s atmosphere. The University of Texas at Austin is a founding partner of the collaboration building the Giant Magellan Telescope.