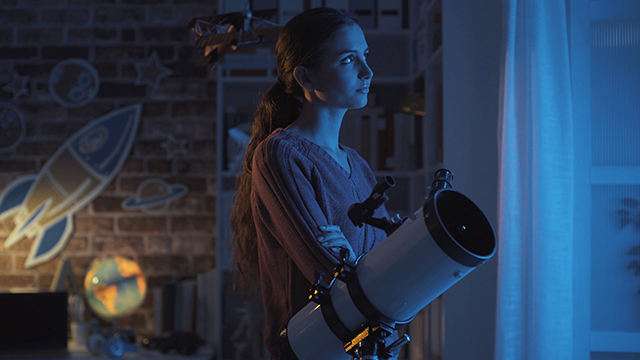 In 2017, the Heising-Simons Foundation—a family foundation that works in climate and clean energy, science, education, and human rights—established the 51 Pegasi b Fellowship to support early-career astronomers engaged in planetary research. Just over a year later, the Foundation announced that it would overhaul the selection process for the program because, out of 12 fellowships awarded in the program's first two years, only two—one each year—went to female scientists.

"Even with our good intentions, we find ourselves part of a system that drives to less rather than more diversity," said the Foundation in a statement on its website. "We commit to working to change our Fellowship and that system for the better."

Over the next year, the Foundation worked with Joyce Yen—director of the University of Washington's ADVANCE Center for Institutional Change, an NSF-funded body to promote female STEM faculty on campus—to modify the application and evaluation process for the 51 Pegasi b Fellowship based on social science research. The goal: to put male and female scientists on a more equal footing.

The Heising-Simons Foundation used the revised method to choose its next class of fellows. In March of this year, the Foundation announced that six scientists would receive 51 Pegasi b Fellowships in 2019, four of them women.

In a paper published Dec. 6 in the journal Nature Astronomy, Yen shared the changes that the Heising-Simons Foundation implemented, and how its lessons could inform changes in academia, education, and philanthropy to boost diversity, equity and inclusion in all STEM fields. Yen sat down with UW News to discuss this unique case study.

This is just one postdoctoral fellowship that researchers in astronomy can apply for. Why is this case so important?

JY: These fellowships have a large impact on career trajectory. When postdoctoral researchers apply for faculty positions, grants or other opportunities, they'll be evaluated in part based on research they've already done and fellowships they've previously earned. So, when the process to award things like postdoctoral fellowships already treats male and female candidates differently, it has an impact not just in regard to diversity, equity and inclusion, but also the demographic makeup of faculty, senior researchers, administrators, and mentors.

What prompted the Heising-Simons Foundation to change the way that this fellowship was awarded?

JY: With just two fellowships going to female scientists in its first two years, there were strong reactions from the astronomy and philanthropic communities, all essentially asking: Why is the gender diversity so skewed in these fellowships while we're having these conversations about diversity, equity, and inclusion? The Heising-Simons Foundation listened, and asked, "How can we make this better?" They reached out to experts and began a year-long process to change the way that they solicit applications and evaluate candidates.

How did you approach working with the Foundation for this fellowship?

JY: I worked with them to evaluate the application process and as a facilitator during the evaluation and review process. Our goal was to bring changes to the fellowship application and evaluation process that reflected effective practices for diversity, equity and inclusion.

What are some of those best practices?

JY: First, don't narrow the applicant pool any earlier than you need to. That makes it more likely that fellowships will be awarded in a way that addresses diversity, equity, and inclusion. Second, ensure that the information collected from applicants actually captures what we want to know about them, and also create an evaluation rubric for reviewers. This avoids situations in which evaluators might "fill in the blanks," read between the lines or make assumptions about applicants that might introduce bias into the selection process. Also, we just want to ensure that we're aware and acknowledge that bias happens to all of us.

So what are some of the changes that the Heising-Simons Foundation put in place to reflect those best practices?

JY: Previously, postdoctoral researchers would apply through the universities that they wanted to work at. The universities would then pick which applications to send to the Heising-Simons Foundation. We changed the process so that postdoctoral researchers would apply directly to the foundation, which would then forward those applications to the relevant universities. This keeps the universities involved in the selection process, which the foundation wanted, but also increased the percentage of female applicants from less than 25 percent under the old system to more than 30 percent.

What about changes to the information given by applicants?

JY: Research has shown that we're not as good as we think we are in evaluating applications without bias coming into play. This is true even in science. Part of overhauling the process involved changes to the application itself—the information we're requesting from the applicant. This involved stepping back and asking, "What do we really want?" Do we want someone innovative, for example? If so, how do we collect information that will let us identify innovation, for example, among the pool of applicants? And what criteria will reviewers use to evaluate and score the applications? By starting from those types of goal-oriented questions, we made changes to the application, such as asking for an open-ended statement from the applicants about diversity, equity and inclusion. We also improved the rubric for reviewers to use in evaluating and scoring applications, including justifications for their score.

What about steps to reduce bias in the evaluation and selection process?

JY: We did quite a lot. To provide a common context among the reviewers, I provided background research about bias—that it happens, often in counterintuitive ways, and can affect outcomes like who receives a fellowship. They reviewed applications in-person, and we took concrete steps to avoid introducing bias through things like "decision fatigue." This is a well-documented phenomenon, and happens when you just "plow through" a list of cases with no breaks. Here, we handled the applications in randomized bundles of six, followed by a brief break. This randomized discussion also helped with anchoring bias where we latch onto a first impression—like an ordinal score or ranking—that influences our future thinking about that application. On paper, these might look like lots of changes, but they really aren't. They're small changes that required a modest investment in time and resources to come up with and implement. But that investment had a large effect on reducing bias and ensuring that the evaluation and selection process is sensitive to diversity, equity, and inclusion. These changes support the overall goal of scientific excellence, noting that excellence has many dimensions.

JY: That is correct. They're widely applicable to STEM fields, academia, and funding organizations. Many types of organizations have made commitments to diversity, equity, and inclusion in STEM fields. But it takes a lot of leadership to actually make it happen. The Heising-Simons Foundation said that it wants to make the investment—caring enough to not just say, "We want to do better," but to actually do better. And even after a change like this, the work is not over. This is an ongoing conversation, and the work must continue.

How would you like to see conversations about diversity, equity, and inclusion evolve?

JY: I would like people to consider diversity as part of excellence. People right now want to know what the value of diversity is in an organization. But let's put it another way: What's the value—or the cost—of being homogenous?