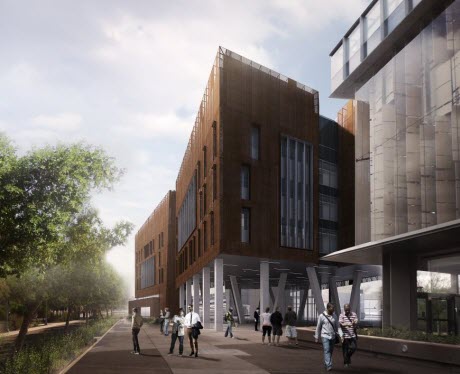 ASU leaders are celebrating the groundbreaking of the school's newest science facility, designed to attract researchers from range of fields.Photo illustration courtesy of ASU Biodesign InstituteArizona State University’s newest research building will be packed with the most advanced construction and technological gear of today. The science that goes on inside will find answers that benefit society every day after.

Researchers will tackle the early detection and treatment of neurodegenerative diseases, speed up drug discovery, and explore new avenues in renewable energy. The third building in ASU’s Biodesign Institute complex, Biodesign C on the Tempe campus, will serve as home to a talented mix of interdisciplinary researchers drawn from across the university, as well as a beacon for research superstars.

The 188,000-square-foot building, scheduled to open in spring 2018, will house a key drug discovery and bioenergy research tool—the world’s first compact X-ray laser—and will attract top-line researchers nationwide who want to advance their discoveries at ASU. The facility will be home to as many as 80 lead researchers and 400 support staff from the Biodesign Institute, the College of Liberal Arts and Sciences, and the Ira A. Fulton Schools of Engineering.

The new facility, with ceremonial groundbreaking Tuesday (Oct. 18), marks how ASU’s research enterprise continues to grow, more than tripling over the past decade.

“This new building will double the size of the Biodesign footprint, but it also will increase our ability to advance lifesaving discoveries and develop new ways of ensuring a safer and healthier planet,” said ASU President Michael Crow.

“This expansion will accelerate the Biodesign Institute’s tremendous track record of achievement and impact,” added Sethuraman “Panch” Panchanathan, ASU’s executive vice president of knowledge enterprise development and chief research and innovation officer. “From a treatment for Ebola to a new, simple rapid screening test to combat the Zika epidemic, Biodesign has made great strides in global health and disease prevention, and in the past year, taken on the treatment and prevention of neurodegenerative diseases.”

Video of the groundbreaking by Jordan Currier/ASU

Future occupants of the building will be based on ASU’s strategic research growth, but two groups currently identified for the new building are the ASU-Banner Neurodegenerative Disease Research Center and the Biodesign Center for Applied Structural Discovery.

Researchers at the NDRC are working to build one of the world’s largest basic science centers for the study of Alzheimer’s and other neurodegenerative diseases. They also are working to develop clinical and research programs with Banner Health.

The center is led by Dr. Eric Reiman, internationally recognized for his contributions to brain imaging, early detection and tracking Alzheimer’s disease, and the accelerated evaluation of Alzheimer’s prevention therapies. Reiman is the executive director of the Banner Alzheimer’s Institute and a university professor of neuroscience in the School of Life Sciences at ASU.

The NDRC is expected to rapidly grow into a preeminent research center in both size and impact through aggressive recruitment of a new research director and innovative research teams pursuing causes and treatments for neurodegenerative diseases. Its impact will be significant as the number of people affected by Alzheimer’s disease could more than triple to 16 million in the U.S. by 2050, at an annual health-care cost of more than $1.2 trillion.

A second center that will call Biodesign C home is the Biodesign Center for Applied Structural Discovery (CASD), which focuses on the use of X-ray lasers to unveil the secrets of biological molecules at work and their interactions with drugs and other biomolecules. Directed by ASU Regents' Professor Petra Fromme, CASD researchers will develop and apply groundbreaking technologies and methodologies to accelerate discoveries of the structure and function of biomolecules.

For example, the CASD team will peer deep inside proteins to better understand the action of molecules critical to cancer and other devastating diseases. The improved imaging will give researchers a better understanding of how specific drugs work in the human body with the goal of developing medicines that work best for each individual with fewer side effects. Fromme’s group also aims to learn how plants efficiently convert sunlight into renewable energy sources. 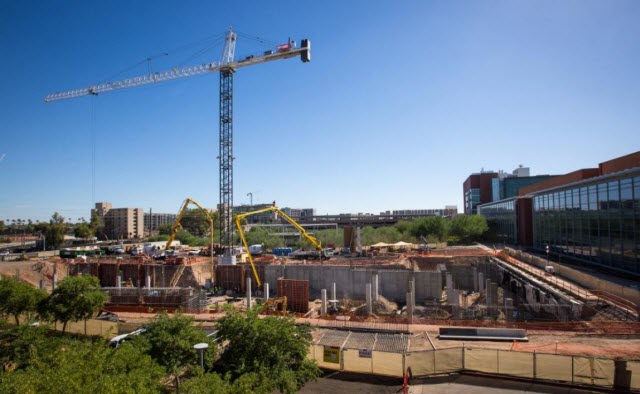 Tuesday's groundbreaking was ceremonial, as work has begun on the Biodesign C site on the Tempe campus. It will rise next to Biodesign Institute A and B buildings (seen on the right).Photo credit: Charlie Leight/ASU Now

The world’s first tabletop X-ray laser will be built and located in the lower level of Biodesign C. The new laser will shrink the size of the X-ray laser from a device that is now about 1 mile long and costs roughly $1 billion to the size of a tabletop and a cost of roughly $25 million. It will make X-ray lasers far more cost-effective and accessible to scientists.

Fromme is a professor of chemistry and biochemistry in the School of Molecular Sciences at ASU.

Biodesign C will be built by the Southwest Division of McCarthy Building Companies Inc. and constructed to form “neighborhoods” where scientists of varying disciplines will be located close enough to each other to encourage collaboration. The design is modeled after state-of-the-art research complexes like the J. Craig Venter Institute in La Jolla, California. Biodesign C will consist of laboratories and offices and will be connected to the Biodesign B building only at its lower level.

Following ASU’s green-building standards, Biodesign C will be designed to the highest levels of sustainability and will include an innovative HVAC system to limit its energy and environmental footprint. Upon completion, Biodesign C will bring the total research square footage of the Biodesign complex to more than a half-million square feet.

The addition of this building to the ASU Biodesign scientific research complex is a major step in advancing the ASU goal of reaching $700 million in research expenditures by 2020.

Impact of the institute

In recognition of his efforts, Arntzen was lauded as the 2014 Arizona Bioscience Researcher of the Year and the No. 1 honoree among Fast Company’s annual “100 Most Creative People in Business” for his leadership role in developing ZMapp.

Another team of Biodesign scientists, led by Stuart Lindsay, worked with IBM’s T.J. Watson Research Center to develop a prototype DNA reader that could make whole genome profiling an everyday practice in medicine.

Biodesign Institute spinout HealthTell landed on the San Francisco Business Times’ list of top five startups to potentially “win big” for 2015. HealthTell’s immunosignature technology is designed to measure a person’s immune response to disease, essentially giving patients and their doctors an early answer on the course of treatment.

Economically, the Biodesign Institute has also made significant contributions. Since its inception in 2003, Biodesign has attracted more than $500 million in external funding from competitive grant awards as well as support from philanthropic and industry sources.

Annually, Biodesign Institute operations have contributed an average of $135.5 million in direct impacts on Arizona’s economy, created and supported more than 1,600 high-paying jobs and generated $10.5 million in state and local tax revenues.