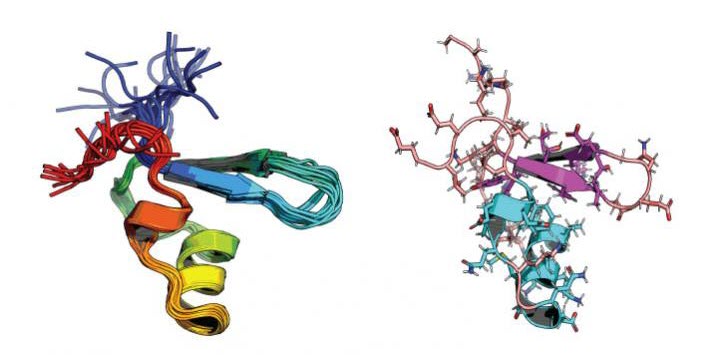 Using a synergistic approach, the collaborative KAUST team analyzed the reaction of different H-NS proteins (shown above) to temperature and salinity on an atomistic level.
© 2021 KAUST; Vladlena Kharchenko

A combination of an array of atomic-level techniques has allowed researchers to show how changes in an environment-sensing protein enable bacteria to survive in different habitats, from the human gut to deep-sea hydrothermal vents.

"The study gives us unprecedented atomic-level insight into how bacteria adapt to changing conditions," says Stefan Arold, professor of bioscience at King Abdullah University of Science & Technology (KAUST). "To obtain these insights, we pushed the limits of three different methods of investigation and combined their results into a unified picture."

The histone-like nucleoid-structuring (H-NS) protein allows bacteria to sense changes in their environment, such as changes in temperature and salinity. Previously, the team had shown how the intestinal pathogen Salmonella typhimurium uses H-NS to control its gene expression profile, enabling it to live optimally inside its warm-blooded host or outside in the soil.

The H-NS protein is also found in bacteria that do not experience massive temperature fluctuations, such as plant pathogens, insect symbionts, and free-living microbes that inhabit deep-sea hydrothermal vents. Still puzzling, however, is how different bacteria have adapted the same sensing mechanism to suit a variety of lifestyles.

No single analysis technique has been able to unravel the inner workings of this mechanism and so, to gain a more integrated view, Arold assembled a diverse team from KAUST and international collaborators. Arold and Lukasz Jaremko, a molecular biochemist at KAUST, collaborated with Jianing Li from the University of Vermont to combine several methods: protonless nuclear magnetic resonance spectroscopy, all-atom molecular dynamics simulations and biophysics techniques. This synergistic approach allowed the researchers to analyze the reaction of different H-NS proteins to temperature and salinity on an atomistic level.

All H-NS proteins displayed the same ancestral sensing mechanism, whereby temperature and salinity promoted melting of one of the two dimerization domains of H-NS, releasing its grip on DNA.

However, site-specific amino acid substitutions, mostly in residues involved in salt bridges, produced a range of static and dynamic features. These effects dampen or amplify the protein's response to suit the bacteria's lifestyle.

"Although the sequences of these proteins are largely conserved, small targeted changes lead to big differences in how they behave," says KAUST research scientist Umar Farook Shahul Hameed.

Thus, the H-NS protein of the apple pathogen Erwinia amylovora lost its sensitivity to heat, which is consistent with the pathogen's lifestyle in stable temperate climates. And only a few amino-acid changes made H-NS from Buchnera aphidicola almost environment insensitive, in line with its role as an obligate endosymbiont of aphids.

"If you tickle the right positions, the behavior changes very easily," says Arold. "Approaches interfering with this sensing mechanism might find applications in areas ranging from climate change mitigation to tackling antibiotic resistance."

- This press release was originally published on the KAUST Discovery website. It has been edited for style