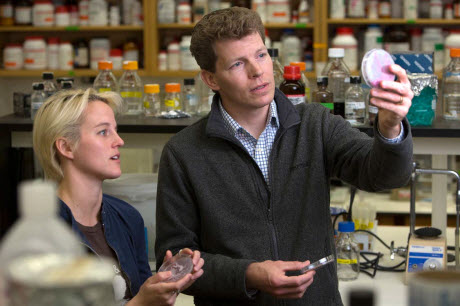 Dan Buckley, associate professor of integrated plant science, with doctoral student Mallory Choudoir.Photo credit: Robert Barker/Cornell University PhotographyFrom a pharmaceutical perspective, few microbes have been as valuable as Streptyomyces: This genus of bacteria is the source of 80 percent of antibiotics in use today. A new study of its distribution in North American soils shows a gradient of diversity that corresponds with latitude and points to the South and Wisconsin as distinctive hotspots.

“You can pretty much find Streptomyces anywhere on the planet where you garden,” said Dan Buckley, the study’s senior author and an associate professor in Cornell's Section of Soil and Crop Sciences in the School of Integrative Plant Science. “One of the most interesting things about them is that they produce lots and lots of antibiotics. The current thought is that they produce antibiotics to protect their turf—literally and figuratively—from each other and other microbes.”

Since the discovery of the first successful Streptomyces-based antibiotic to treat tuberculosis in 1944, tapping into the diversity from this genus has been a priority for antibiotic discovery. Buckley and his research group are convinced that one key to realizing the potential within these antibiotic powerhouses is a better understanding of the evolutionary history and ecology of the bacteria. They analyzed samples from 15 sites in North America, including soil beneath lawns, meadows, and old fields, yielding more than 900 strains, which represented more than 100 distinct groups within the Streptomyces family tree. But it was the pattern of diversity that intrigued Buckley and his team.

“We saw strong regional patterns, for example certain strains were only present in the Northeast or the South,” said Buckley. “The diversity was higher in the South and lower in the North, corresponding to latitude. While this pattern has been observed in plants and animals, this is one of the first studies to show a latitudinal gradient of diversity in microbes.”

Identification of the general pattern in diversity also made the exceptions quite clear, including the high diversity in the Driftless Area of Wisconsin, a small region in the southwestern part of the state. The Driftless Area escaped the Wisconsin Glacier that covered nearly all of Canada and the northern United States between 30,000 and 10,000 years ago.

“It was the most diverse sample in the whole study, and it was also the most connected to many other sites across the continent,” said Buckley. “So it’s a place that’s ripe for more sampling in future work.”

The latitudinal gradient in diversity supports Buckley’s hypothesis that historical climate change, specifically repeated ice ages sweeping from north to south, was a key factor in shaping microbial diversity. Furthermore, the data from his research group shows the cycles of repeated range expansion and contraction appear to have given the upper hand in shaping bacterial diversity to luck and chance, rather than the survival-of-the-fittest pressure of natural selection.

“Each time a glacier would approach, it would make a clean slate of the soil, because while the spores are durable, they don’t live thousands of years,” noted Buckley. “So you can imagine that for the first microbes to arrive it was like the Promised Land, with no competition, and they could sweep through the environment.”