Duke University biomedical engineers have harvested genes for ion channels from bacteria that, with a few tweaks, can create and enhance electrical signaling in human cells, making the cells more electrically excitable.

The technique could one day be used to treat cardiac arrhythmia or to restore electrical functions to scarred heart or nervous system tissues. It might also prove useful for treating a variety of genetic diseases involving poor conductivity in human sodium and calcium channels.

The study appears online in Nature Communications on October 18.

In mammals, the genes controlling the sodium ion channels responsible for a cell’s electrical activity are surprisingly large. Too large, unfortunately, to be readily delivered to cells through a virus—standard procedure in modern gene therapy techniques. 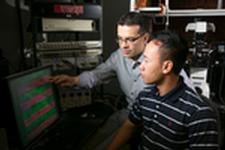 “In current medical practice, there is nothing that can be done to stably augment the electrical excitability of cells in the heart or brain,” said Nenad Bursac, professor of biomedical engineering at Duke. “There are no drugs that can efficiently do it, and any mammalian genes that might help are too large for gene therapy applications. Our technique, however, uses much smaller bacterial ion channels that proved successful in human cells in the laboratory. We’re currently testing this in live animals.”

While bacterial genes encoding sodium channels are different than their human counterparts, evolution has conserved many similarities of ion channel design since multi-celled animals diverged from bacteria hundreds of millions of years ago.

Hung Nguyen, a doctoral student in Bursac’s laboratory, mutated these bacterial genes so that channels they encode could become active in human cells.

In one experiment, the researchers placed cultured cells in several parallel lines, alternating between electrically active and inactive cells. When stimulated at one end, the electrical signal traveled across the lines very slowly.

The researchers then delivered three genes to the electrically inactive cells: one bacterial gene for a sodium ion channel and two supporting genes encoding a potassium channel and connexin-43, a protein that helps shuttle electrical signals between cells.

When delivered to unexcitable cells taken from the skin, heart and brain, the trio of genes caused the cells to become electrically active, speeding up the electrical signals as they raced across the lines.

“You could imagine using this to alter electrically dead cardiac scar tissue after a heart attack to bridge gaps between healthy cells,” said Nguyen, who also points out that all three genes are small enough to be delivered simultaneously by a single virus.

Nguyen and Bursac also showed that the gene encoding the bacterial sodium channel could, by itself, enhance the excitability of cells that are already electrically active. In a second experiment, they delivered the sodium channel gene to cardiomyocytes—electrically active heart cells—in conditions mimicking various diseases or stressful situations, such as a heart attack.

“In those pathological conditions, these cells become electrically silent,” said Bursac. “But when we add the bacterial channel, we can keep them conducting electrical signals under more severe conditions.”

Nguyen adds that this work contributes to a growing body of research that is looking to so-called “primitive” organisms for help with our own health.

“There’s a large pool of bacterial species whose sodium channels might have slightly different electrical characteristics to draw from,” said Nguyen. “These channels can be also modified to pass calcium ions. We’re developing a framework for others to begin exploring these opportunities.”