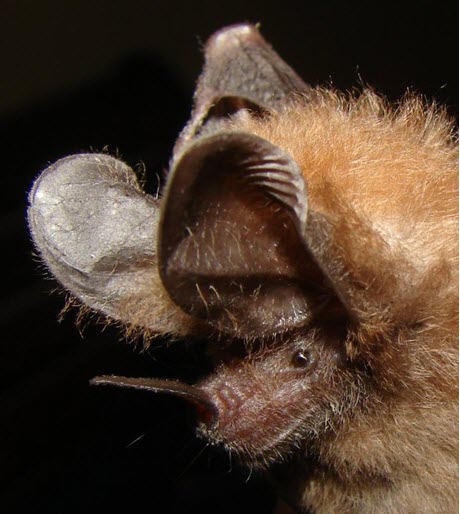 A portrait of Micronycteris microtis.Credit: Inga GeipelOn moonless nights in a tropical forest, bats slice through the inky darkness, snatching up insects resting silently on leaves—a seemingly impossible feat. New experiments at the Smithsonian Tropical Research Institute (STRI) show that by changing their approach angle, the echolocating leaf-nosed bats can use this sixth sense to find acoustically camouflaged prey. These new findings, published in Current Biology, have exciting implications for the evolution of predator-prey interactions.

"For many years it was thought to be a sensory impossibility for bats to find silent, motionless prey resting on leaves by echolocation alone," said Inga Geipel, Tupper Postdoctoral Fellow at STRI. Geipel's team discovered how the bats achieve the impossible. By combining evidence from experiments using a biosonar device to create and measure artificial signals, with evidence from high-speed video observations of bats as they approach prey, the importance of the approach angle was revealed.

Bats have a superpower humans do not share: they flood an area with sound waves and then use information from the returning echoes to navigate through the environment. Leaves reflect echolocation signals strongly, masking the weaker echoes from resting insects. So in the thick foliage of a tropical forest, echoes from the leaves may act as a natural cloaking mechanism for the insects, known as acoustic camouflage.

To understand how bats overcome acoustic camouflage and seize their prey, the researchers aimed sound waves at a leaf with and without an insect from more than 500 positions in order to create a full, three-dimensional representation of the echoes. At each position, they calculated the intensity of the echoes for five different frequencies of sound that represent the frequencies of a bat's call.

Leaves both with and without insects strongly reflect back the sound if it comes from straight ahead (i.e., from angles smaller than 30 degrees). When a bat approaches from these angles, it cannot find its prey as strong echoes from the leaves mask the echoes from the insect. But Geipel and colleagues found that if the sound originates from oblique angles greater than 30 degrees, the sound is reflected away from the source and leaves act like a mirror, just as a lake reflects the surrounding forest at dusk or dawn. The approach angle makes a resting insect detectable.

Based on these experiments, Geipel and colleagues predicted that bats should approach resting insects on leaves from angles between 42 and 78 degrees, the optimal angles for discerning whether a leaf has an insect on it or not.

Next, Geipel recorded actual bats at STRI's Barro Colorado Island research station in Panama as they approached insects positioned on artificial leaves. Using recordings from two high-speed cameras, she reconstructed the three-dimensional flight paths of the bats as they approached their prey and determined their positions. She discovered that, as predicted, almost 80 percent of the approach angles were within the range of angles that makes it possible for the bats to distinguish insect from leaf.

"This study changes our understanding of the potential uses of echolocation," Geipel said. "It has important implications for the study of predator-prey interactions and for the fields of sensory ecology and evolution."