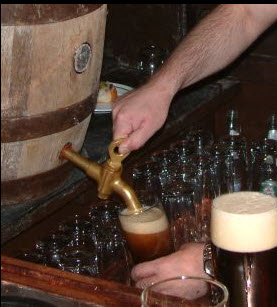 A compound in hops, which is an ingredient in beer, could help protect brain cells from damage. SilkTork, Wikimedia CommonsThey're now reporting in the American Chemical Society's Journal of Agricultural and Food Chemistry that a compound from hops could protect brain cells from damage — and potentially slow the development of disorders such as Alzheimer's and Parkinson's diseases.

Jianguo Fang and colleagues note that mounting evidence suggests that oxidative damage to neuronal cells contributes to the development of diseases that originate in the brain. If scientists could find a way to guard these cells from this type of damage, they might be able to help prevent or slow down Alzheimer's disease, Parkinson's disease and other neurodegenerative conditions. One compound found in hops, called xanthohumol, has gotten the attention of researchers for its potential benefits, including antioxidation, cardiovascular protection and anticancer properties. Fang's team decided to test xanthohumol's effects on brain cells.

In lab tests, the researchers found that the compound could protect neuronal cells and potentially help slow the development of brain disorders. The scientists conclude xanthohumol could be a good candidate for fighting such conditions.

The authors acknowledge funding from Lanzhou University and the Natural Science Foundation of Gansu Province.