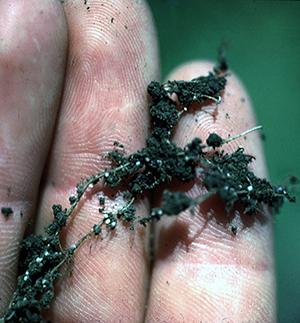 Over the past 30 years, the use of soil fumigants and nematicides used to protect cole crops, such as broccoli and Brussels sprouts, against cyst nematode pathogens in coastal California fields has decreased dramatically. A survey of field samples in 2016 indicated the nematode population has also decreased, suggesting the existence of a natural cyst nematode controlling process in these fields.

Thanks to California's pesticide-use reporting program, nematologists have been able to follow the amounts of fumigants and nematicides used to control cyst nematodes over the past three decades. "Application of these pesticides steadily declined until they were completely eliminated in 2014 while, for example, broccoli yields continued to increase each year," said Ole Becker, a scientist with the Department of Nematology at the University of California.

In a study of 152 fields, Borneman, Becker, and colleagues detected cyst nematodes in about 38 percent of them. Only a few of these fields had enough nematodes to potentially damage the crops. This showed that growers had likely reduced their usage of nematicides because of a natural decline in the nematode populations.

To identify the cause of this natural decline, Borneman, Becker and colleagues used cyst nematodes as a bait and found that a diverse population of fungi were likely killing the nematodes. The most abundant genus was Hyalorbilia, which contains species previously described as effective parasites of cyst and root-knot nematodes.

"The results from our baiting analysis combined with advanced molecular tools gave us a detailed depiction of the possible nematode-parasitizing fungi in these soils, which then provided a plausible explanation for this dramatic decrease in pesticide use," said Borneman.

Their research demonstrates the usefulness of monitoring plant-parasitic nematode density before using nematicides and increases the awareness of beneficial fungi in crop protection. These fungi might be considered as possible biological control agents for nematodes.

- This press release was supplied by the American Phytopathological Society. It has been edited for style