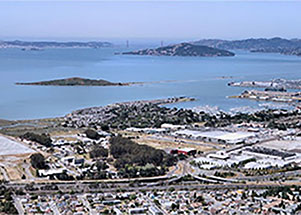 The Richmond waterfront site of the proposed Berkeley Global Campus.University of California at BerkeleyBERKELEY – “While other U.S. universities have built branch campuses abroad, the University of California at Berkeley is betting it can create a global higher education hub in its own backyard,” begins an Inside Higher Edstory on the campus’s plans for a new Berkeley Global Campus in Richmond — one of two articles on the ambitious proposal to run today (Thursday, Jan. 22) in prestigious, high-visibility journals of higher education.

The Chronicle of Higher Education also published an in-depth look at Berkeley’s plans for a global campus on the Richmond waterfront, which Chancellor Nicholas Dirks first announced in October. “By situating the campus nearby — an unusual move in an era when many American institutions are building abroad — Berkeley hopes to establish partnerships with universities from around the world while preserving full academic freedom for its faculty,” the article says.

Inside Higher Ed, A Global Hub, Close to Home