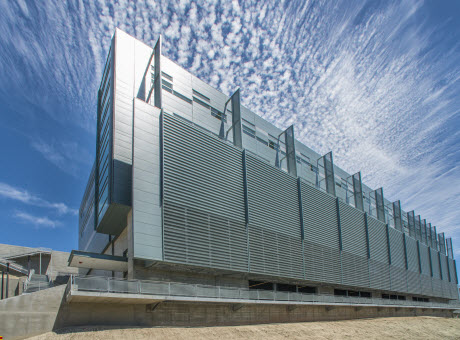 Named Shyh Wang Hall, the facility will house the National Energy Research Scientific Computing Center, or NERSC, one of the world’s leading supercomputing centers for open science which serves nearly 6,000 researchers in the U.S. and abroad. Wang Hall will also be the center of operations for DOE’s Energy Sciences Network, or ESnet, the fastest network dedicated to science, which connects tens of thousands of scientists as they collaborate on solving some of the world’s biggest scientific challenges.

Complementing NERSC and ESnet in the facility will be research programs in applied mathematics and computer science, which develop new methods for advancing scientific discovery. Researchers from UC Berkeley will also share space in Wang Hall as they collaborate with Berkeley Lab staff on computer science programs.

The 149,000 square foot facility built on a hillside overlooking the UC Berkeley campus and San Francisco Bay will house one of the most energy-efficient computing centers anywhere, tapping into the region’s mild climate to cool the supercomputers at the National Energy Research Scientific Computing Center (NERSC) and eliminating the need for mechanical cooling. 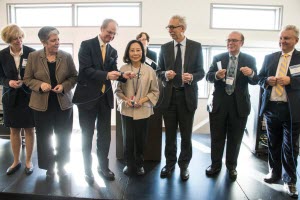 The ceremonial “connection” marking the opening of Shyh Wang Hall.Photo courtesy of Lawrence Berkeley National Laboratory“With over 5,000 computational users each year, Berkeley Lab leads in providing scientific computing to the national energy and science user community, and the dedication of Wang Hall for the Computing program at Berkeley Lab will allow this community to continue to flourish,” said DOE Under Secretary for Science and Energy Lynn Orr.

Modern science increasingly relies on high performance computing to create models and simulate problems that are otherwise too big, too small, too fast, too slow or too expensive to study. Supercomputers are also used to analyze growing mountains of data generated by experiments at specialized facilities. High speed networks are needed to move the scientific data, as well as allow distributed teams to share and analyze the same datasets.

Wang Hall is named in honor of Shyh Wang, a professor at UC Berkeley for 34 years who died in 1992. Well-known for his research in semiconductors, magnetic resonances and semiconductor lasers, which laid the foundation for optoelectronics, he supervised a number of students who are now well-known in their own right, and authored two graduate-level textbooks, “Solid State Electronics” and “Fundamentals of Semi-conductor Theory and Device Physics.” Dila Wang, Shyh Wang’s widow, was the founding benefactor of the Berkeley Lab Foundation.

Solid state electronics, semiconductors and optical networks are at the core of the supercomputers at NERSC—which will be located on the second level of Wang Hall—and the networking routers and switches supporting the Energy Sciences Network (ESnet), both of which are managed by Berkeley Lab from Wang Hall. The Computational Research Division (CRD), which develops advanced mathematics and computing methods for research, will also have a presence in the building.

“Berkeley Lab is the most open, sharing, networked, and connected National Lab, with over 10,000 visiting scientists using our facilities and leveraging our expertise each year, plus about 1,000 UC graduate students and postdocs actively involved in the Lab’s world-leading research,” said Berkeley Lab Director Paul Alivisatos. “Wang Hall will allow us to serve more scientists in the future, expanding this unique role we play in the national innovation ecosystem. The computational power housed in Wang Hall will be used to advance research that helps us better understand ourselves, our planet, and our universe. When you couple the combined experience and expertise of our staff with leading-edge systems, you unlock amazing potential for solving the biggest scientific challenges.”

The $143 million structure financed by the University of California provides an open, collaborative environment bringing together nearly 300 staff members from three lab divisions and colleagues from UC Berkeley to encourage new ideas and new approaches to solving some of the nation’s biggest scientific challenges.

“All of our University of California campuses rely on high performance computing for their scientific research,” said UC President Janet Napolitano. “The collaboration between UC Berkeley and Berkeley Lab to make this building happen will go a long ways towards advancing our knowledge of the world around us.” 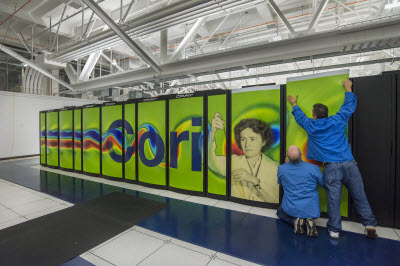 NERSC’s Cray Cori supercomputer’s graphic panels being installed at Wang Hall.Photo courtesy of Lawrence Berkeley National LaboratoryThe building features unique, large, open windows on the lowest level, facing west toward the Pacific Ocean, which will draw in natural air conditioning for the computing systems. Heat captured from those systems will in turn be used to heat the building. The building will house two leading-edge Cray supercomputers – Edison and Cori – which operate around the clock 52 weeks a year to keep up with the computing demands of users.

ESnet, which links 40 DOE sites across the country and scientists at universities and other research institutions via a 100 gigabits-per second backbone network. ESnet also connects researchers in the U.S. and Europe over connections with a combined capacity of 340 Gbps. To support the transition of NERSC from its 15-year home in downtown Oakland to Berkeley Lab, NERSC and ESnet have developed and deployed a 400 Gbps link for moving massive datasets. This is the first-ever 400 Gbps production network deployed by a research and education network.

The Computational Research Division, the center for one of DOE’s strongest research programs in applied mathematics and computer science, where more efficient computer architectures are developed alongside more effective algorithms and applications that help scientists make the most effective use of supercomputers and networks to tackle problems in energy, the environment and basic science.