The ECP announced Sept. 7 that it has selected 15 application development proposals for full funding—of which Berkeley Lab will lead two and support four others—and seven proposals for “seed” funding, three of which will be led by Berkeley Lab, which will also support two others.

Exascale refers to high-performance computing systems capable of at least a billion billion calculations per second, or 50 to 100 times faster than the nation’s most powerful supercomputers in use today. The projects target advanced modeling and simulation solutions to specific challenges supporting key DOE missions in science, clean energy and national security. Since designing an exascale computer will require a significant change from current supercomputer architectures, scientific applications that run on today’s systems will also need to be reconfigured to take advantage of exascale systems.

The ECP’s multi-year mission is to maximize the benefits of high performance computing (HPC) for U.S. economic competitiveness, national security and scientific discovery. In addition to applications, the DOE project addresses hardware, software, platforms and workforce development needs critical to the effective development and deployment of future exascale systems. The ECP is sponsored by the DOE Office of Science and the National Nuclear Security Administration.

“These awards reflect our extensive experience and expertise in computational science across a wide range of disciplines, including accelerator design, subsurface flows, cosmology, combustion, chemistry,” said Kathy Yelick, associate laboratory director for Computing Sciences. “Our applied mathematics and computer science expertise will be needed to develop applications tailored to exascale systems, and has also opened up a new set of high end simulation and data analytics applications in bioinformatics, seismology, carbon capture and urban systems modeling.”

Berkeley Lab is already paving the way for critical science applications to be ready for exascale computing. In 2104 NERSC launched the NERSC Exascale Science Applications Program (NESAP), a collaborative effort in which NERSC works closely with code teams and library and tools developers to prepare for the NERSC’s newest supercomputer, Cori, based on Intel’s newest Xeon Phi processor with 68 cores per processor. Additionally, applied mathematicians have developed Adaptive Mesh Refinement (AMR) libraries that are being used in many exascale applications. 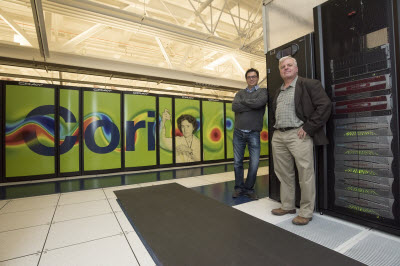 David Trebotich (left) and Carl Steefel, leaders of the exascale subsurface modeling project, pose with Cori, NERSC’s newest supercomputer.Photo credit: Marilyn Chung“An Exascale Subsurface Simulator of Coupled Flow, Transport, Reactions and Mechanics” will be led by Carl Steefel of the Earth and Environmental Sciences Area and David Trebotich of the Computational Research Division. The project will support application code development for a sound understanding of and predictive capability for the interacting hydrological, chemical, thermal, and mechanical processes in subsurface formations for improved energy extraction and safely storing CO2 and other wastes. Lawrence Livermore National Laboratory and the National Energy Technology Laboratory will participate in the project. Chombo-Crunch, the underlying application code, is one of the codes targeted by the NESAP program and incorporates AMR.

“Exascale Modeling of Advanced Particle Accelerators” will be led by Jean-Luc Vay of the Accelerator Technology and Applied Physics Division. Particle accelerators are a vital part of the DOE-supported infrastructure of discovery science and university research, as well as private-sector applications, and have a broad range of benefits to industry, security, energy, the environment and medicine. This project supports the practical economic design of smaller, less-expensive plasma-based accelerators. Turning this from a promising technology into a mainstream scientific tool depends critically on high-performance, high-fidelity modeling of complex processes that develop over a wide range of space and time scales. Lawrence Livermore National Laboratory and the SLAC National Accelerator Laboratory will participate in the project. Vay also leads the NESAP project on Advanced Modeling of Particle Accelerators. This project also incorporates AMR.

Supercomputer simulations of plasma-based accelerators typically use a “moving window” to restrict the simulation area to a “small” region of interest that encompasses the laser beam and the portion of wakefield that accelerates the electron beam. In this simulation, a laser beam (red and blue disks) propagating through an under-dense plasma displaces electrons, creating a wake that supports very high electric fields, or “wakefield” (pale blue and yellow), that can be used to accelerate a short electron beam (white) to high-energy over a very short distance. While the simulation box is spatially much smaller, the number of time steps that are required to simulate the crossing of the laser through the plasma is still very large, typically over a million. Video courtesy of Lawrence Berkeley National Laboratory

Berkeley Lab is also participating in these four-year projects:

“Computing the Sky at Extreme Scales,” led by Argonne National Laboratory will support cosmological research in the Standard Model of Particle Physics, including dark matter, dark energy, and inflation of the universe. This is another project incorporating AMR.

“NWChemEx: Tackling Chemical, Materials and Biomolecular Challenges in the Exascale Era,” led by Pacific Northwest National Laboratory, will advance the NWChem computational chemistry application, which is used in areas ranging from designing catalysts for biofuels to developing stress-resistant crops. NWChem is one of the applications targeted by NESAP.

“Data Analytics at the Exascale for Free Electron Lasers,” led by the SLAC National Accelerator Laboratory, will support research in protein structures and dynamics and 3D molecular structure design of engineering functional properties. This project will work closely with Berkeley Lab’s Center for Advanced Mathematics for Energy Research Applications (CAMERA).

“Exascale Solutions for Microbiome Analysis” will be led by Associate Lab Director Yelick, with support from Los Alamos National Laboratory and DOE’s Joint Genome Institute. The project will use machine learning algorithms and a high performance metagenome assembler based on the Meraculous application to study microbial diversity with the goal of developing new products and identifying new life forms. Meraculous is a NESAP application.

“Exascale Models of Stellar Explosions: Quintessential Multi-Physics Simulation” will be led by Dan Kasen of the Nuclear Science Division, with support from Argonne and Oak Ridge national labs, Stony Brook University and the University of Chicago. The project aims to explore the origin of chemical elements (which result from exploding stars, as well as other phenomena. HACC (Hardware/Hybrid Accelerated Cosmology Code) for Extreme Scale Cosmology is a NESAP project and also incorporates AMR.

“High Performance, Multidisciplinary Simulations for Regional Scale Seismic Hazard and Risk Assessments” will be led by David McCallen of Earth and Environmental Sciences, with participation from Lawrence Livermore National Laboratory, the University of California at Davis and UC Berkeley. This project also incorporates AMR.

Berkeley Lab is also contributing to two other seed projects: