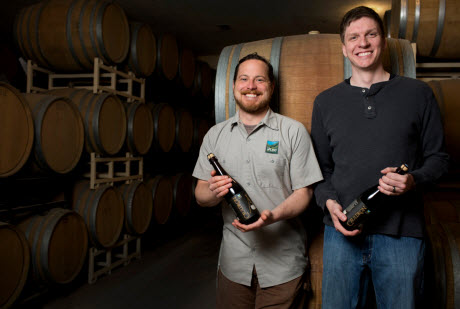 IU biochemist Matthew Bochman, right, and Caleb Staton of Upland Brewing Co. in front of the barrels used to age sour beers. Bochman collaborated with Upland to develop an improved method to create sour beers.Photo credit: Indiana UniversityBLOOMINGTON, Ind. -- Indiana University researchers have found that conditions common in the production of certain types of craft beers can inhibit the successful production of these brews, risking a growing segment of an industry whose economic impact was recently estimated at $55 billion.

The conditions, the primary of which is high acidity, threaten yeasts typically used in the production of sour beers, one of the fastest-growing segments of the craft beer industry. The work, which appears in the journal Food Microbiology, also reports a method to overcome the condition, dubbed "terminal acid shock."

The lead author on the paper is Matthew Bochman, an assistant professor in the IU Bloomington College of Arts and Sciences’ Department of Molecular and Cellular Biochemistry and a craft brewing consultant. The research was conducted in collaboration with Upland Brewing Co., a small craft brewery based in Bloomington, Ind.

"This study shows that pre-adapting yeast in a readily available and nutritionally dense substance composed of yeast extract, peptides, sugar, and the beer under preparation can ensure the proper bottle conditioning of sour beers," Bochman said. "Simply using untreated dry yeast or yeast rehydrated in water alone should be used with caution in the production of 'extreme beers' such as sours."

Other authors on the paper are Caleb Staton and Adam Covey of Upland Brewing; Cody Rogers, a graduate student at IU Bloomington; and Devon Veatch, a student at Ivy Tech Community College of Indiana.

The beer used in the experiment was developed by Upland Brewing, whose previous attempts to brew a variety of sour beer, called "Cauldron," failed two years in a row due to complications during the bottling phase, resulting in the loss of 1,600 gallons of beer. The variety, aged in charred oak barrels filled with Michigan cherries, has a pH level of 3, a typical acidity for many sour beers.

To conduct the study, Bochman and colleagues observed the reaction of six strains of brewer's yeast–or Saccharomyces cerevisiae–exposed to organic acids such as acetic and lactic acid produced by bacteria during brewing. The six strains used in the study are commonly known as cask and bottle conditioned beer yeast; California ale yeast; Hefeweizen ale yeast; Champagne yeast; American ale yeast; and Pilsen lager yeast. The first and fourth strains were least affected by changes in pH levels.

The two strains of brewer's yeast on the left failed to carbonate without treatment with nutrient-rich compound. The right two samples show successful carbonation with the same yeast strains after treatment.Photo credit: Matthew Bochman

"Our analysis revealed that terminal acid shock was not completely lethal to the yeast’s cells, although nearly a third of the yeast died in some experiments," Bochman said. "The acid did, however, significantly inhibit the metabolism of the surviving yeast."

This slowed metabolism is responsible for the microbes' failure to "exhale" the carbon dioxide that creates carbonation during bottling. But the fact that the majority of the yeast survived meant the researchers found they could revive the microorganism through incubation in a nutritionally dense substance typically used in labs called YPD, which contains yeast extract, peptides, and sugar.

"Normally breweries simply re-hydrate dry yeast with water and sugar prior to bottling, but sours are too harsh," Bochman said. "Exposing the yeast to a mixture of YPD and the uncarbonated beer a day prior to bottling strengthens the microbes enough to survive a highly acidic environment."

The bottling method could become increasingly important as sour beers grow in popularity, with the number of varieties skyrocketing in the past several years, Bochman said.

"The results of his research helped remedy a real technical dilemma in bottle conditioning of our sour beers," said Staton, director of sour operations at Upland Brewing. "As a company, we're committed to sharing information with researchers, as well as the brewing community, as it only helps to strengthen quality in our industry. We're hopeful this work can be used by other breweries to troubleshoot similar issues."

In addition, Bochman is the recipient of $13,000 from the Johnson Center for Innovation and Translational Research at IU Bloomington. The one-year grant funded the establishment of Wild Pitch Yeast LLC, a company that assists craft brewers and homebrewers with the extraction of brewer’s yeasts from local sources such as berries, flowers, and tree bark, offering the results for re-sale.

The company has already banked about 300 strains of yeast, primarily from Midwestern states such as Indiana, Ohio, Kentucky, and Pennsylvania. Bochman has also filed intellectual property disclosures on a number of the strains for potential licensing. His partners on the business are Rob Caputo, executive director of the Brewers of Indiana Guild, and Justin Miller of Black Acre Brewing in Indianapolis.

This research was also supported by funds from the Johnson Center grant.