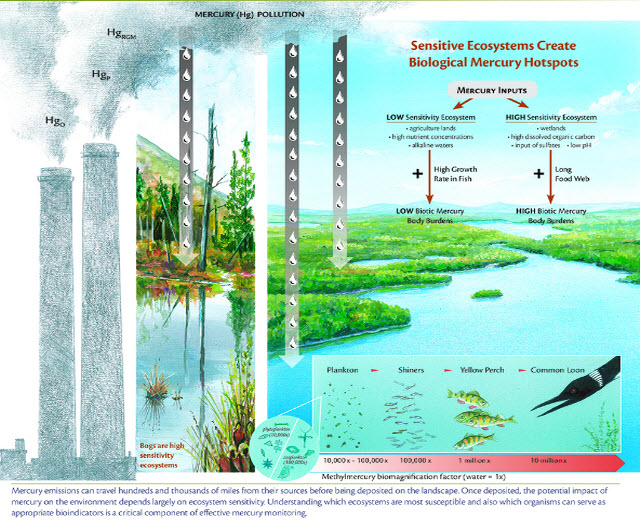 Biodiversity Research Institute is a leader in research designed to understand the risks of exposure to and the effects of mercury in ecosystems.Image Courtesy of: BRI's Science Communications piece "Center for Mercury Studies"

(Portland, ME)—Biodiversity Research Institute (BRI), announces the publication of the scientific paper Evaluating the effectiveness of the Minamata Convention on Mercury: Principles and recommendations for next steps, published by the journal Science of the Total Environment (now available online).

Opened for signature in October 2013, the Minamata Convention on Mercury is the first major environmental treaty since the Kyoto Protocol came into effect in 2005. The Convention addresses issues related to the use and release of mercury through trade, industrial uses, and atmospheric emissions, as well as the long-term storage and disposal of mercury and mercury compounds.

“The Minamata Convention is a landmark global treaty designed to limit the use and spread of mercury in the environment,” says David C. Evers, Ph.D., BRI’s executive director and lead author on the paper. “Evaluating the effectiveness of the Convention, which is a requirement of the treaty, is a crucial component to ensure that it meets this objective.”

Evaluating the effectiveness of the Minamata Convention on Mercury proposes an approach to measure the Convention’s effectiveness that includes a suite of short-, medium-, and long-term metrics related to five major mercury control Articles in the Convention:
• Supply sources and trade (Article 3 of the Convention)
• The use of mercury in products (Article 4)
• Manufacturing processes that use mercury (Article 5)
• Mercury use in artisanal and small-scale gold mining (ASGM; Article 7)
• Air mercury emissions from coal-fired power facilities and other sectors (Article 8)

In addition, this paper describes the use of select bioindicators (both wildlife and humans) to assess and monitor environmental mercury concentrations and associated changes resulting from controls in place. The use of existing biotic mercury data will define spatial gradients (e.g., biological mercury hotspots), baselines to develop relevant temporal trends, and how to assess risk to taxa and human communities of greatest concern.

“The task of evaluating the effectiveness of the Convention requires more than a monitoring exercise – it requires a robust array of data,” says Niladri Basu, PhD, associate professor and Canada Research Chair in Environmental Health Sciences at McGill University, Canada. “It is critical that we embrace an evidence-based approach to this evaluation; we have the scientific tools to do so. It is also critical that we share this knowledge to forge the best path forward in reducing mercury pollution around the world.”

The Minamata Convention on Mercury is predicted to come into force (when 50 countries ratify the Convention) in 2017. “The debate about how to measure the effectiveness of the Convention is beginning now,” says Susan Egan Keane, deputy director of the Health Program at the Natural Resources Defense Council. “Our goal in publishing this paper is to contribute sound science and analysis to that discussion.”

For information on the Minamata Convention and other resources, visit: www.nrdc.org/resources/minamata-convention-mercury-contents-guidance-and-resources

Biodiversity Research Institute, headquartered in Portland, Maine, is a nonprofit ecological research group whose mission is to assess emerging threats to wildlife and ecosystems through collaborative research, and to use scientific findings to advance environmental awareness and inform decision makers. BRI supports ten research programs within three research centers including the Center for Mercury Studies, which was initiated in 2011.

BRI is assisting in multiple ways with the ratification and implementation of the Minamata Convention on Mercury—a globally binding agreement facilitated by the United Nations Environment Programme (UNEP). BRI is a co-lead of UNEP’s Mercury Air Transport and Fate Research Partnership Area and a member of the Artisanal and Small-scale Gold Mining (ASGM) Partnership Area. BRI is also an Executing Agency of the United Nations Industrial Development Organization and serves as an international advisor for the United Nations Development Program to help coordinate and facilitate enabling activities to conduct Minamata Initial Assessments for many countries. Visit www.briloon.org/mercury for more information.

The Natural Resources Defense Council is a U.S.-based environmental advocacy organization founded in 1970.With headquarters in New York, NY, and offices around the U.S. and in Beijing, China, NRDC combines the power of more than two million members and online activists with the expertise of some 500 scientists, lawyers, and policy advocates across the globe to ensure the rights of all people to the air, the water, and the wild. Visit www.nrdc.org for more information.

The McGill School of Environment, one of 12 schools at McGill University, Montreal, Canada, focuses on research themes including: Health in a Changing Environment; Ecosystems, Biodiversity and Conservation; Citizens, Communities, Institutions and the Environment; Rethinking Social-Ecological Relationships. Visit www.mcgill.ca for more information.