Here’s how to build a whirligig: Thread a loop of twine through two holes in a button. Grab the loop ends, then rhythmically pull. As the twine coils and uncoils, the button spins at a dizzying speed.

Now, using the same mechanical principles, Stanford University bioengineers have created an ultra-low-cost, human-powered centrifuge that separates blood into its individual components in only 1.5 minutes. Built from 20 cents of paper, twine and plastic, a “paperfuge” can spin at speeds of 125,000 rpm and exert centrifugal forces of 30,000 Gs.

“To the best of my knowledge, it’s the fastest spinning object driven by human power,” said Manu Prakash, an assistant professor of bioengineering at Stanford.

A centrifuge is critical for detecting diseases such as malaria, African sleeping sickness, HIV, and tuberculosis. This low-cost version will enable precise diagnosis and treatment in the poor, off-the-grid regions where these diseases are most prevalent.

The physics and test results of this device are published in the Jan. 10 issue of Nature Biomedical Engineering.

When used for disease testing, a centrifuge separates blood components and makes pathogens easier to detect. A typical centrifuge spins fluid samples inside an electric-powered, rotating drum. As the drum spins, centrifugal forces separate fluids by density into layers within a sample tube. In the case of blood, heavy red cells collect at the bottom of the tube, watery plasma floats to the top, and parasites, like those that cause malaria, settle in the middle.

Prakash, who specializes in low-cost diagnostic tools for underserved regions, recognized the need for a new type of centrifuge after he saw an expensive centrifuge being used as a doorstop in a rural clinic in Uganda because there was no electricity to run it.

“There are more than a billion people around the world who have no infrastructure, no roads, no electricity. I realized that if we wanted to solve a critical problem like malaria diagnosis, we needed to design a human-powered centrifuge that costs less than a cup of coffee,” said Prakash, who was senior author on the study.

Related Article: Want to Print Your Own Cellphone Microscope for Pennies?

Inspired by spinning toys, Prakash began brainstorming design ideas with Saad Bhamla, a postdoctoral research fellow in his lab and first author on the paper. After weeks of exploring ways to convert human energy into spinning forces, they began focusing on toys invented before the industrial age—yo-yos, tops, and whirligigs.

“One night I was playing with a button and string, and out of curiosity, I set up a high-speed camera to see how fast a button whirligig would spin. I couldn’t believe my eyes,” said Bhamla, when he discovered that the whirring button was rotating at 10,000 to 15,000 rpms.

After two weeks of prototyping, he mounted a capillary of blood on a paper-disc whirligig and was able to centrifuge blood into layers. It was a definitive proof-of-concept, but before he went to the next step in the design process, he and Prakash decided to tackle a scientific question no one else had: How does a whirligig actually work?

The other string theory

Bhamla recruited three undergraduate engineering students from MIT and Stanford to build a mathematical model of how the devices work. The team created a computer simulation to capture design variables like disc size, string elasticity, and pulling force. They also borrowed equations from the physics of supercoiling DNA strands to understand how hand-forces move from the coiling strings to power the spinning disc.

“There are some beautiful mathematics hidden inside this object,” Prakash said.

Once the engineers validated their models against real-world prototype performance, they were able to create a prototype with rotational speeds of up to 125,000 rpm, a magnitude significantly higher than their first prototypes.

In parallel, they improved the device’s safety and began testing configurations that could be used to test live parasites in the field. From lab-based trials, they found that malaria parasites could be separated from red blood cells in 15 minutes. And by spinning the sample in a capillary precoated with acridine orange dye, glowing malaria parasites could be identified by simply placing the capillary under a microscope.

Bhamla and Prakash, who recently returned from fieldwork in Madagascar, are currently conducting a paperfuge field validation trial for malaria diagnostics with PIVOT and Institut Pasteur, community-health collaborators based in Madagascar.

Paperfuge is the third invention from the Prakash lab driven by a frugal design philosophy, where engineers rethink traditional medical tools to lower costs and bring scientific capabilities out of the lab and into hands of health care workers in resource-poor areas.

The first was the foldscope, a fully functional, under-a-dollar paper microscope that can be used for diagnosing blood-borne diseases such as malaria, African sleeping sickness, and Chagas. To date there are 50,000 foldscopes in the hands of people around the world, and a spinoff company recently launched a Kickstarter campaign to ship 1 million more.

The second was a $5 programmable kid’s chemistry set, inspired by hand-crank music boxes, which enables the execution of precise chemical assays in the field.

Prakash’s dream is that these tools will enable health workers, field ecologists, and children in the most remote areas of the world to carry a complete laboratory in a backpack.

“Frugal science is about democratizing scientific tools to get them out to people around the world,” said Prakash.

Prakash is also a member of Stanford Bio-X and Stanford ChEM-H, a senior fellow at the Stanford Center for Innovation in Global Health and an affiliate of the Stanford Woods Institute for the Environment.

Other co-authors on the paper are Brandon Benson, Chew Chai, Georgios Katsikis, and Aanchal Johri. 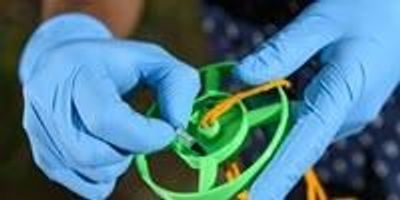