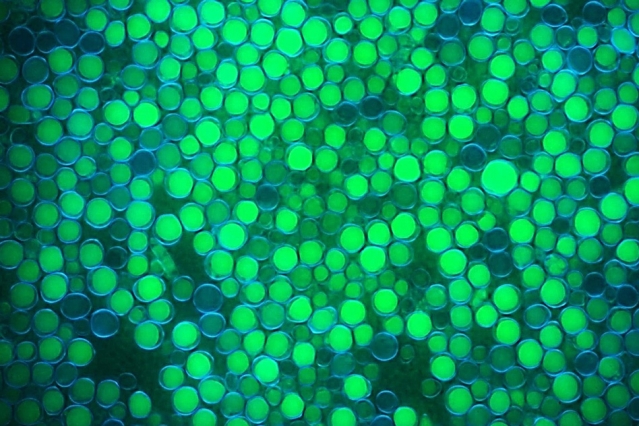 The ability to ferment low-cost feedstocks under nonsterile conditions may enable new classes of biochemicals and biofuels, such as microbial oil produced by the yeast Yarrowia lipolytica (shown here, oil in lipid bodies is stained green and cells walls stained blue).Image: Novogy, Inc.CAMBRIDGE, Mass. -- The cost and environmental impact of producing liquid biofuels and biochemicals as alternatives to petroleum-based products could be significantly reduced, thanks to a new metabolic engineering technique.

Liquid biofuels are increasingly used around the world, either as a direct "drop-in" replacement for gasoline, or as an additive that helps reduce carbon emissions.

The fuels and chemicals are often produced using microbes to convert sugars from corn, sugar cane, or cellulosic plant mass into products such as ethanol and other chemicals, by fermentation. However, this process can be expensive, and developers have struggled to cost-effectively ramp up production of advanced biofuels to large-scale manufacturing levels.

One particular problem facing producers is the contamination of fermentation vessels with other, unwanted microbes. These invaders can outcompete the producer microbes for nutrients, reducing yield and productivity.

Ethanol is known to be toxic to most microorganisms other than the yeast used to produce it, Saccharomyces cerevisiae, naturally preventing contamination of the fermentation process. However, this is not the case for the more advanced biofuels and biochemicals under development.

To kill off invading microbes, companies must instead use either steam sterilization, which requires fermentation vessels to be built from expensive stainless steels, or costly antibiotics. Exposing large numbers of bacteria to these drugs encourages the appearance of tolerant bacterial strains, which can contribute to the growing global problem of antibiotic resistance.

Now, in a paper published today in the journal Science, researchers at MIT and the Cambridge startup Novogy describe a new technique that gives producer microbes the upper hand against unwanted invaders, eliminating the need for such expensive and potentially harmful sterilization methods.

The researchers engineered microbes, such as Escherichia coli, with the ability to extract nitrogen and phosphorous–two vital nutrients needed for growth–from unconventional sources that could be added to the fermentation vessels, according to Gregory Stephanopoulos, the Willard Henry Dow Professor of Chemical Engineering and Biotechnology at MIT, and Joe Shaw, senior director of research and development at Novogy, who led the research.

What's more, because the engineered strains only possess this advantage when they are fed these unconventional chemicals, the chances of them escaping and growing in an uncontrolled manner outside of the plant in a natural environment are extremely low.

"We created microbes that can utilize some xenobiotic compounds that contain nitrogen, such as melamine," Stephanopoulos says. Melamine is a xenobiotic, or artificial, chemical that contains 67 percent nitrogen by weight.

Conventional biofermentation refineries typically use ammonium to supply microbes with a source of nitrogen. But contaminating organisms, such as Lactobacilli, can also extract nitrogen from ammonium, allowing them to grow and compete with the producer microorganisms.

In contrast, these organisms do not have the genetic pathways needed to utilize melamine as a nitrogen source, says Stephanopoulos.

"They need that special pathway to be able to utilize melamine, and if they don't have it they cannot incorporate nitrogen, so they cannot grow," he says.

The researchers engineered E. coli with a synthetic six-step pathway that allows it to express enzymes needed to convert melamine to ammonia and carbon dioxide, in a strategy they have dubbed ROBUST (Robust Operation By Utilization of Substrate Technology).

When they experimented with a mixed culture of the engineered E. coli strain and a naturally occurring strain, they found the engineered type rapidly outcompeted the control, when fed on melamine.

They then investigated engineering the yeast Saccharomyces cerevisiae to express a gene that allowed it to convert the nitrile-containing chemical cyanamide into urea, from which it could obtain nitrogen.

The engineered strain was then able to grow with cyanamide as its only nitrogen source.

Finally, the researchers engineered both S. cerevisiae and the yeast Yarrowia lipolytica to use potassium phosphite as a source of phosphorous.

"So by engineering the strains to make them capable of utilizing these unconventional sources of phosphorous and nitrogen, we give them an advantage that allows them to outcompete any other microbes that may invade the fermenter without sterilization," Stephanopoulos says.

The microbes were tested successfully on a variety of biomass feedstocks, including corn mash, cellulosic hydrolysate, and sugar cane, where they demonstrated no loss of productivity when compared to naturally occurring strains.

The ROBUST strategy is now ready for industrial evaluation, Shaw says. The technique was developed with Novogy researchers, who have tested the engineered strains at laboratory scale and trials with 1,000-liter fermentation vessels, and with Felix Lam of the MIT Whitehead Institute for Biomedical Research, who led the cellulosic hydrosylate testing.

Novogy now hopes to use the technology in its own advanced biofuel and biochemical production, and is also interested in licensing it for use by other manufacturers, Shaw says.