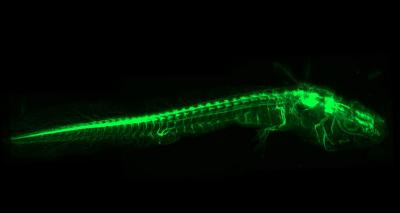 BAR HARBOR, ME — The extraordinary progress that has been achieved in the biomedical sciences in the modern era can be attributed in large measure to imaging technologies that have allowed scientists to observe the structure and function of tissues and organs in the context of their natural tissue environments in greater detail than possible with the naked eye.

But that ability has been limited to a handful of traditional animal model systems, including worms, flies, and mice, either by tissue characteristics that make them amenable to imaging (such as a lack of natural pigmentation), or by the fact that the techniques used for preparing microscopic specimens in these models are not broadly applicable to a diverse range animal species.

The development of a new imaging technique by Prayag Murawala, PhD, of the Mount Desert Island (MDI) Biological Laboratory and his collaborators, however, enables unprecedented insight subcellular structures, tissues, organs, and even whole organisms, and—because of its wide applicability—broadens the range of animal models that can be studied, processes that can be explored, and biological questions that can be addressed.

"The use of traditional animal models has contributed enormously to scientific progress, but these models represent only a tiny fraction of species of ecological or evolutionary interest," Murawala said. "By developing a method that opens up previously inaccessible models to imaging, we hope to accelerate discoveries that can be translated into new cures and interventions for human disease."

The fast, simple, and powerful new method, called DEEP-Clear (DEpigmEntation-Plus-Clearing), is the subject of recent paper in the international journal Science Advances to which Murawala was a contributing author.

The paper, entitled "A Versatile Depigmentation, Clearing and Labeling Method for Exploring Nervous System Diversity," was written by a 16-member team from research institutions and universities in Vienna, Austria, led by Hans-Ulrich Dodt of the Vienna University of Technology and the Medical University of Vienna, and Florian Raible of the University of Vienna.

Murawala, who recently joined the MDI Biological Laboratory as assistant professor, conducted research for the paper at the Institute of Molecular Pathology in Vienna, where he studied limb and spinal cord regeneration in the axolotl, a highly regenerative salamander that was a subject of the paper. He will continue to study the axolotl at the MDI Biological Laboratory, which focuses on research in regenerative medicine.

The main advantage of the new method is that it allows scientists using state-of-the-art imaging technologies to view a specimen in three dimensions rather than the usual two, Murawala said. In addition to allowing scientists to better track biological processes at the cellular level, the method avoids the structural damage that can occur using traditional techniques, which involve cutting tissues into thin layers, or sections.

The DEEP-Clear method is particularly valuable for scientists studying development, neuroscience, and regeneration, Murawala said. For instance, it can be used to study the entire nervous system of a small organism, or to gain insight into regeneration by investigating the dynamics of behavior in cells that are migrating to the site of a lost limb or tissue that is in the process of regenerating.

"Traditional techniques limit our understanding of biology, "Murawala explained. "If you want to understand the connections between neurons [nerve cells]—how a neuron connects one part of the brain to another part or to the spinal cord, for example—you can't capture that in a section because you are limited to two dimensions."

The new method expands the roster of model organisms that are optically accessible by addressing one of the major problems in specimen preparation: the absorption of light by natural pigments, which limits how deeply specimens can be imaged. While traditional techniques work well in non-pigmented organs like the mouse brain, pigments in the eye and skin pose a challenge to the study of specimens from non-traditional models.

In addition to removing pigmentation that could shield tissues and organs from view, the new method addresses another problem posed by traditional methods: the scattering of light caused by differences in refractive indices (RIs), or the speed at which light travels through various types of molecules, i.e., water, fat, and protein. The method builds on techniques used in unpigmented specimens to resolve the RI heterogeneity issue.

Still another advantage of the method is its ability to be used at various scales—from the detailed high-resolution investigation of confocal microscopy, which uses a pinhole to illuminate a point of interest, to the three-dimensional imaging of light-sheet microscopy, which, because it scans specimens using a very thin plane of laser light rather than a point, is advantageous for tracking cells and tissues in living organisms.

The development of a new tool with potential to expand the roster of model animals used in biological research represents a return to the roots of the biological sciences—and to the origins of the MDI Biological Laboratory. Prior to the development of sophisticated tools to work with a short list of preferred species, biologists studied a wide variety of models, many of them from the sea.

The 122-year-old laboratory is one of many research institutions originally founded to study the diversity of marine life. Over the years, its scientists have studied crabs, fish, jellyfish, sea squirts, seals, sharks, skates, starfish, and more. Though the goal has always been to use the model best suited to the question under study, that hasn't always been possible due to the lack of new tools for studying nontraditional models.

"The natural world is rich with organisms that science and medicine can learn from," said Hermann Haller, MD, the laboratory's president. "By developing an imaging method that can be applied to a broad spectrum of species and experimental approaches, Prayag is building on a long and distinguished history of discovery at the MDI Biological Laboratory using non-traditional species in a comparative context."

In Vienna, Murawala was a postdoctoral fellow in the laboratory of Elly Tanaka, PhD, a highly regarded scientist (and another author of the recent paper) who studies limb and spinal cord regeneration in the axolotl. One of five nontraditional species studied in the paper, the axolotl is prized in regenerative medicine research because—unlike mammals—it can regenerate almost any body part.