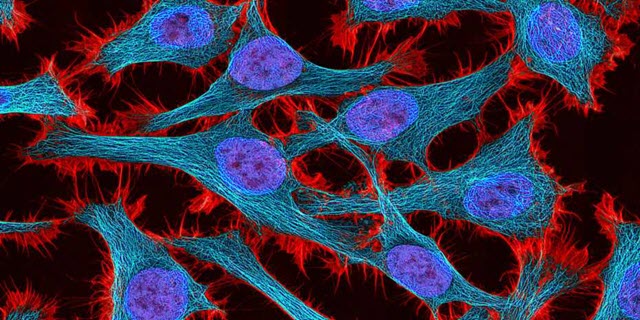 HeLa cells are the Ford Fiesta of cell culture. To date, scientists have used these cells in hundreds of thousands of life sciences experiments, and they have been the subject of tens of thousands of scientific publications. But research findings based on these cloned descendants of human cancer cells cannot always be reproduced by other scientists. To get to the bottom of this lack of reproducibility, a group of system biologists working with ETH professor Ruedi Aebersold has embarked on a massive project: molecular cell measurement.

ETH News: In your most recent study, you and your colleagues examined 14 different populations of HeLa cells extremely thoroughly. What was it that made you want to undertake this painstaking work?

Ruedi Aebersold: Our study is concerned with the question of the reproducibility of scientific data—an important topic that comes up again and again, not only in science but also in the media.

What are the key findings of your study?
We clearly demonstrate that non-reproducibility can be traced at least in part to the variety found in HeLa cells. These ostensibly identical cells used by researchers are in fact very different when it comes to their genes, their transcripts, and the proteins that their genes produce.

What is so remarkable about that?
All HeLa cells have the same origin. They are descended from cell material taken from a patient with cervical cancer in the 1950s. In principle, these cells are immortal; they are cultivated in nutrient solutions and used in lab experiments around the world. The problem is that HeLa cells change over time. If you conduct the same experiment with them in different labs, you might well get different results. This is generally interpreted either as poor work or as non-reproducibility. But the point is that what makes the results non-reproducible is at last in part due to the fact that the cells used are not identical.

Why are the cells so different?
Essentially because these are cancer cells: they have an unstable genome and therefore change their molecular makeup quite quickly. HeLa cells divide every 24 hours and each cell division can be associated with random mutations that change the genome. Changing the genome changes the transcripts, in other words the messenger RNA molecules, which in turn means subtly different proteins will be produced.

Almost 100,000 scientific publications are based on work using HeLa cells. Does your new study make these papers worthless?
The papers are certainly not worthless. But it is often the case that two studies looking at the same issue have come to different conclusions. Our study now provides an explanation for such discrepancies, since the cells used in the experiments are materially different.

How will your findings make their way into lab practice?
We want to hold a workshop in June together with the European Molecular Biology Organization, EMBO. We will be inviting experts in genomic instability and cell biologists, but also representatives of scientific journals and funding institutions. Our aim is to publish recommendations on how to get around the problem and improve the reproducibility of research findings.

What is the nature of your recommendations?
The simplest recommendation is to always ensure that the cells used are thoroughly documented. This is a minimum objective. The majority of those 100,000 publications say no more than that HeLa cells were used. Another recommendation is to ensure that the cells used have undergone as few divisions as possible. Other researchers have already suggested banning work using cancer cell lines. But in my view, that is not a suitable solution. What’s important is that the problem has now been recognized and made public.

What should the documentation include?
I propose taking a molecular fingerprint of the proteome—in other words, all the proteins in their entirety—or of the transcriptome—all messenger RNA molecules in their entirety—as present at a particular time in the cells used in the experiments. These days, taking measurements of this kind is relatively inexpensive, but perhaps still high enough to provoke resistance in the scientific community. Compared with the overall costs of a research paper, though, the costs of this kind of fingerprint are minimal. The idea is for the fingerprint to be appended to the publication. If we had molecular data on the cells used in all the 100,000 papers to date, along with the biochemical and cell biological results presented in these papers, we could use computer analysis to gather unimagined insights into how cells function. The data in the fingerprints would be a gold mine for biology.

How significant is the issue of non-reproducibility in pharmaceutical research?
We will also invite representatives of the pharmaceutical sector to the workshop. Pharmaceutical research often works with cancer cells in order to test substances from libraries of compounds. Researchers in this area also want to know how stable the cells they use are and how quickly they change over time. That’s an important consideration, especially considering that the data from cell culture tests are a requirement for getting an active substance approved.

Why do researchers continue to use HeLa cells despite these difficulties?
Cancer cells are easy to handle because the cells are robust, multiply well, and grow quickly. Recently, certain stem cells have proved genetically more stable. But generating them is more complicated and expensive. Some researchers think we should work only with this type of stem cell. But if a lab has been working with HeLa cells for many years, it can’t simply switch to other cell lines, because they are the basis of all their research work.

Why is reproducibility so essential?
It is the foundation for experimental research. For findings to be classed as substantiated, people need to be able to reproduce them. If they can’t be reproduced, then there’s something going on that we haven’t sufficiently understood. Often, this work will be repeated. An element of observed variability or poor reproducibility is inherent in the biological materials—and not the technology—used in labs.