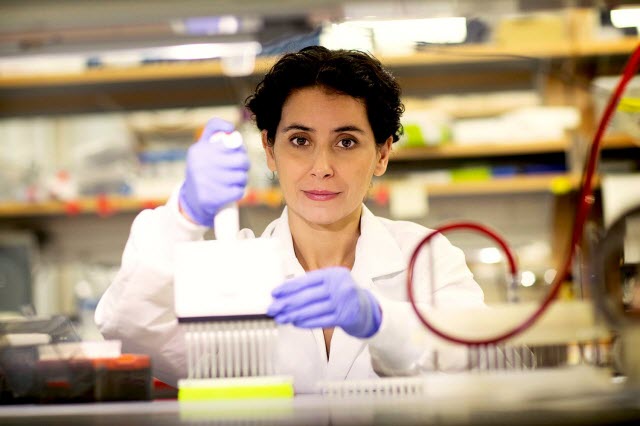 Human diseases are network diseases,” said Eyleen O’Rourke, an assistant professor of biology and cell biology at the University of Virginia.

By that she means that our genes, cells, tissues and organs all interact and affect each other as a highly complex network of entities that, in combination with the environment—defined as our diet, health habits, and other factors—determine whether our bodies are affected by disease, and how they respond to the medications used to treat various disorders.

“The same mutation in the cystic fibrosis-causing gene, for example, may mean a life expectancy of less than two decades for one individual, but mild symptoms for other individuals,” O’Rourke said. “That is because the effect of many other factors—often misunderstood factors—in the network of genes, cells and tissues that compose our bodies, and our interaction with the environment, define how the mutation may or may not play out. The network also affects how well various disease treatments work on a particular individual.”

To gain a better understanding of complex diseases, O’Rourke and a team of colleagues at UVA, Harvard Medical School and the University of California at San Diego are planning to create the first-ever 3-D computer model of an entire living animal—in this case a widely studied worm with a relatively simple cellular system made up of 20 cell types and about 20,000 genes.

The relatively simple organism that O’Rourke and her colleagues are working to model, Caenorhabditis elegans, is an excellent system for studying genetics and systems biology at the cellular level. More than 60 percent of its genes function essentially the same as human genes.

The O’Rourke-led team will mine the whole genome of a form of the worm that is insulin-resistant and obese. They will inactivate, one at a time, all 20,000 genes of this animal in every cell type, and also change diets. In this way, they will define the network changes that permit or cause metabolic disease in this model system. The data will then be used to generate the first computer model of animal metabolism with single-cell detail.

“By modeling this simple nematode, we will get the first glimpse at how genetic changes, in combination with different environments, determine health or disease,” O’Rourke said.

In addition, by building this worm model, the team will generate the experimental and informatics tools required for highly sophisticated future models of mammals, and, perhaps, even for humans. Because the model will be interactive, researchers will be able to manipulate genes, or the diet, and generate testable hypotheses much more rapidly than currently can be done in laboratories using real animals.

“The model that we propose to develop will be a steppingstone to a better ability to predict health and disease outcomes through functional gene network reconstruction and modeling,” O’Rourke said. “Nothing like this currently exists.

“In the future, in combination with personalized genomics, predictive modeling could transform our ability to rationalize the design and testing of highly targeted treatments and facilitate the way to true personalized medicine.”

For this endeavor, O’Rourke has won a $1.2 million grant from the W.M. Keck Foundation. UVA will contribute an additional $200,000 to the project through the Office of the Vice President for Research. O’Rourke’s high-risk/high-value research also has earned a $240,000 grant from the Pew Charitable Trusts, which recently named her a Pew Biomedical Scholar.

O’Rourke expects to complete the development of the technology in three to four years.

“There are currently no models that can fully represent animal life with its complex levels of organization, from genes to cells to organs,” said Phil Parrish, UVA’s interim vice president for research. “Without such models, it is not possible to completely anticipate the effects of drugs on different organ systems, to design tissues or organs our bodies would not reject, or simply to understand life at the molecular level. Through the Keck Foundation’s and Pew’s generous support, the O’Rourke group’s 3-D modeling efforts will open new doors in biology and biomedicine.”

In addition to the Keck and Pew awards, the American Federation of Aging Research recently named O’Rourke a fellow, an honor that comes with $100,000 to fund her team’s research on aging.