A series of photos captures Finless, a juvenile electric eel, jumping out of the water to shock Catania’s arm.Photo credit: Ken Catania/Vanderbilt UniversityThe shock from a young electric eel feels like accidentally touching a horse fence. A big one is more like getting tasered—by nine of those devices at once.

Vanderbilt University researcher Ken Catania knows because he stuck his arm into a tank with small eel 10 times. It was the only way to get accurate measurements of the circuit created by animal, arm, and water. Measuring the shock from those interactions allowed him to solve an equation he can extrapolate to measure the power released by bigger eels, which can grow to 8 feet or longer.

Catania, Stevenson Professor of Biological Sciences, studies the neurobiology of predators and prey and last year proved the validity of a controversial 200-year-old account of eels leaping out of Amazonian waters to shock horses. But documenting their leaping ability left him wondering about the resistances and current for each component of an attack. 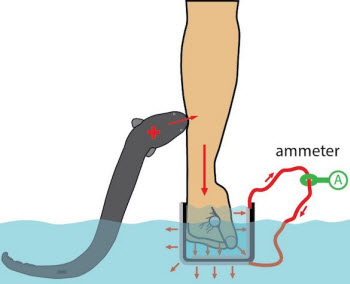 A graphic of the device Ken Catania used to complete the circuit among eel, arm, and water.Graphic credit: Ken Catania/Vanderbilt University“It was definitely a good lesson in how efficient the electric eel would be at deterring a predator,” said Catania, who worked with a 16-inch-long juvenile eel he affectionately named Finless. “Eels are essentially batteries immersed in water, and I wanted to solve the question of how powerful those batteries are. What’s the internal resistance of the battery? What’s the resistance of the water? My past research left out the last variable: my arm.”

To close the circuit and get the measurement, he created a device that used copper wire to conduct the electricity from the shock to his arm back to the water, one of the methods documented in his paper “Power Transfer to a Human during an Electric Eel’s Shocking Leap.” It will be published in the Sept. 25 issue of Current Biology.

Catania said the research reminded him that there’s always something more to learn about electric eels, even though they’ve been studied for 200 years.

“They’re so much more sophisticated than we possibly could have imagined,” he said. “This animal can generate hundreds of volts, but they’ve also evolved to very efficiently deliver that electricity.” 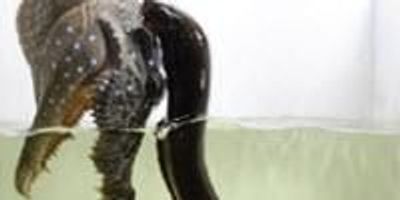 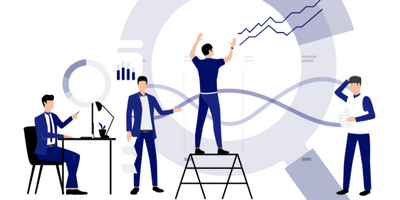 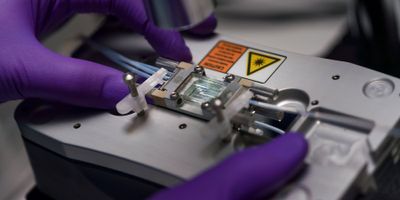