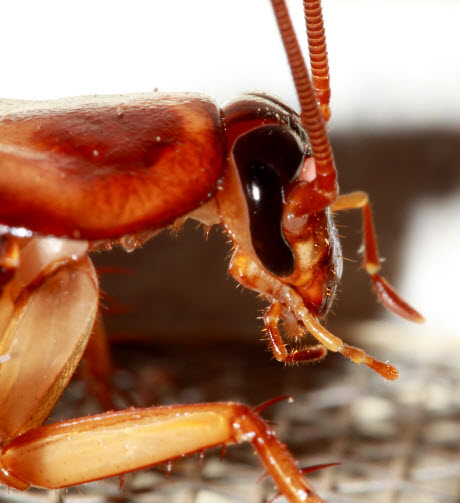 By selectively stimulating these same neurons, the scientists can cause the roach to replicate the movements.

The finding makes clear how the insect brain directs the body to move in an intended direction, including changes in joint coordination and reflexes.

“The central complex appears to be an area of the insect brain that monitors many forms of sensory information as well as the insect's internal state, and then influences various forms of movement,” said Roy Ritzmann, biology professor at Case Western Reserve.

“It’s like a joystick on the animal,” said Joshua Martin, a postdoctoral researcher in Ritzmann’s lab. “We can control its direction and alter its speed.”

The scientists believe this finding provides insight into the control of movement, not just in insects, but likely all animals that walk. The cockroach’s system is also a useful model for building robots that can maneuver around obstacles on their own, self-driving cars and for controlling drones the researchers said.

The research was published Oct.22 in the journal Current Biology. Martin, the lead author, and Ritzmann worked with recent Case Western Reserve PhD graduates Peiyuan Guo; Cynthia Harley, in the Department of Biology at Metropolitan State University; and Laiyong Mu, from the Department of Neuroscience at the University of Arizona.

To understand how the insects control movement, the research team inserted tiny wires in the central complex of 27 free-walking cockroaches, recorded the neuronal activity and videotaped the insects. The electrodes were placed in an area of the brain that responds to antennal and visual inputs, which are essential for navigating.

“The neural activity is generated in the center of the cockroach brain,” Martin said. “The outputs from the central complex are sent to the motor center in the thoracic ganglia—its version of the spinal cord—and on to the limbs.”

Neuronal activity increases when the animals are walking and turning, but it took several steps to determine if that activity encodes for specific movements.

The researchers matched a statistical model of how neurons generate spikes to the neuronal activity recorded. They then used high-speed video to backtrack and match the insect’s movement around the time of the neuronal spike. By making statistical links between movements and spikes, they separated the signals for different speeds and turn directions.

From that, “we can see which cells prefer a left or right turn and which prefer forward motion slow and fast, and see combinations of slow right or fast left,” Ritzmann said.

When the scientists passed electrical current through the same electrodes that recorded activity, different ensembles of neurons were activated, and the cockroach repeated what had been spontaneous movements.

“For the vast majority of cockroaches we tested, if you stimulate the cells you saw were active before the turn or slow or fast walk, you get the same movement every time you stimulate them,” Martin said.

The researchers also showed that electrical stimulation applied to central-complex cells alters reflexes in a manner consistent with changes in motions associated with turning.

When a walking insect turns, the legs on the inside of the turn change from pushing backward to reaching out and pulling laterally. This requires a change in the way the leg joints are coordinated, which occurs when pattern generation circuits for each joint are coupled through inter-joint reflexes.

It was already known that those reflexes change when the animal decides to turn or walk backward. But, to learn how brain activity alters leg motions, Martin tested the reflexes by tugging and relaxing a joint sensor–an activity akin to a doctor tapping a patient’s knee–and monitored what happened with and without stimulation in the central complex.

They were able to directly change the reflex from a walking/pushing pattern to a turning/pulling pattern when they stimulated the brain. “It's as if the doctor could stimulate your brain and change your reflex, so that when he hit your knee, instead of kicking out you, kicked backwards,” Martin said.

“So it appears that the motor maps that we identified act on the motor system by altering the sign of these reflexes,” Ritzmann said.

The encoding system was consistent across the animals tested, but is probably not unique to cockroaches, the team concluded.

“It is highly likely that descending motor control such as this also resides in all legged animals, including us,” Ritzmann said. “So this kind of study, with the technical advantages that insects afford researchers, can help to understand how movement is generally controlled in complex environments.”

Ritzmann is among a group of scientists at Case Western Reserve who suggest that robots would be more autonomous and useful, and autopilot and driverless cars would benefit, if makers would include systems like the sensorimotor complex insects use to maneuver and navigate. This research is a step toward that, he said, “but we have to better understand how animals solve these issues first.”

The team also found that the central complex’s neural coding system is flexible. When a cockroach climbs over a block, a set of nerve cells that had been firing readily in a fast-walking cockroach changed their activity, producing a different correlation between spiking neurons and locomotion.

The researchers will look further into how the central complex changes to adapt movement to the needs of the animal. Martin, Ritzmann and colleagues are now studying sensorimotor function in praying mantises and other species of insects.