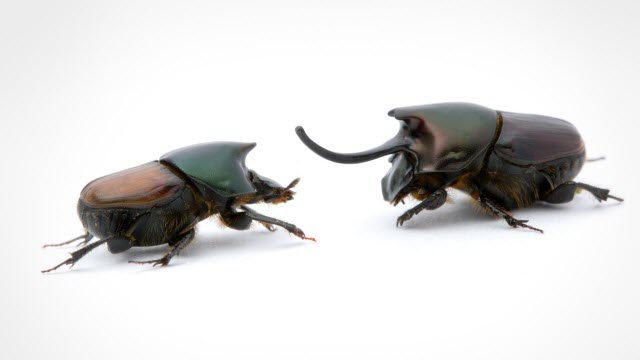 Two beetles of the genus Onthophagus. Despite having the same genome, the beetles develop horns, right, or no horns based on the nutrition available as larvae.Photo credit: Alex Wild

BLOOMINGTON, Ind. — Biologists at Indiana University have significantly advanced understanding of the genetic pathways that control the appearance of different physical traits in the same species depending on nutritional conditions experienced during development.

In many animals, nutrition—not genetic differences—controls the appearance of certain physical traits. Ants and bees, for example, grow into workers or queens based upon the food eaten as larvae. 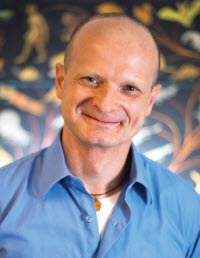 The work is reported in the Proceedings of the National Academy of Sciences. Kijimoto is the lead author on the paper.

"For the first time, we've found a set of mechanisms that actively inhibit or promote the production of specific traits in the same species during development based upon precise nutritional conditions," said Moczek, a professor in the IU Bloomington College of Arts and Sciences' Department of Biology.

The genes reported on in the study are part of the hedgehog signaling pathway, a cellular communication system best known to biologists for playing a role in specifying front and back of developing structures, such as an insect's leg or wing. In horned beetles, Kijimoto and Moczek identified this pathway as inhibiting the growth of certain structures when the animal experienced low nutrition during early development.

"If you put these two pathways together," Moczek said, "the result is the first comprehensive developmental genetic explanation of a nutrition-dependent developmental threshold, a phenomenon that biologists have been trying to explain for a very long time."

The specific genes in the hedgehog signaling pathway investigated as part of this study are called "hedgehog," "patched," and "smoothened." Together, these genes form part of a "relay system" that transmits information about external circumstances, such as nutrition, to the cell nucleus, where decisions are made about gene expression.

Biologists are interested in developmental thresholds in part because they allow the same organisms to produce very different traits in response to environmental conditions. In case of the beetles, this includes the development of aggressive, horned males under high nutrition who must fight for access to mates and hornless "sneaker" males under low nutrition who mate by stealth. The specific beetle species in the study was Onthophagus taurus, a type of tunneling dung beetle whose males turn into horned fighters only when their larval nutrition allows them to reach over 5 millimeters in size as adults.

Other examples of nutrition-dependent alternatives include “castes” among social insects, such as workers and queen bees, or dirt-eating versus cannibalistic versions of many tadpoles. Many organisms also use cues other than nutrition to create similar thresholds, such as seasonally cued butterflies who appear different in the spring and fall; the winged and wingless stages of aphids; or the winter and summer fur coats of arctic foxes. The underlying thresholds allow organisms to effectively generate alternative versions of themselves, despite being limited to a single genome.

Thresholds can also become targets of evolutionary processes themselves and shift, or become otherwise modified. In fact, the effect has been seen in Onthophagus taurus over the past 50 years. During this time, the size threshold for horns in males has lowered in the United States due to lack of competition from other males. In Western Australia, by contrast, male-male competition is so intense that only the largest males succeed as fighters, and the threshold size is correspondingly high.

Going forward, Moczek plans to investigate how specifically the hedgehog and sex-determination pathways detect nutrition; how the same nutritional threshold affects different sexes or parts of the same body differently; and how the pathways talk to other nutrition-sensing pathways, such as the insulin-signaling pathway.

"Now that we understand how these pathways provide communication with the outside world, we want to start listening in on the conversation," Moczek said.

This research was funded in part by the National Science Foundation. Kijimoto is currently on faculty at West Virginia University.