Researchers from EPFL and the University Medical Center Utrecht in the Netherlands have developed an extremely fast optical method for sculpting complex shapes in stem-cell-laden hydrogels and then vascularizing the resulting tissue. Their groundbreaking technique stands to change the field of tissue engineering. CREDIT: EPFL

Tissue engineers create artificial organs and tissues that can be used to develop and test new drugs, repair damaged tissue, and even replace entire organs in the human body. However, current fabrication methods limit their ability to produce free-form shapes and achieve high cell viability.

Researchers at the Laboratory of Applied Photonics Devices (LAPD), in EPFL's School of Engineering, working with colleagues from Utrecht University, have come up with an optical technique that takes just a few seconds to sculpt complex tissue shapes in a biocompatible hydrogel containing stem cells. The resulting tissue can then be vascularized by adding endothelial cells.

The team describes this high-resolution printing method in an article appearing in Advanced Materials. The technique will change the way cellular engineering specialists work, allowing them to create a new breed of personalized, functional bioprinted organs.

Printing a femur or a meniscus

The technique is called volumetric bioprinting. To create tissue, the researchers project a laser down a spinning tube filled with a stem-cell-laden hydrogel. They shape the tissue by focusing the energy from the light at specific locations, which then solidify. After just a few seconds, a complex 3D shape appears, suspended in the gel. The stem cells in the hydrogel are largely unaffected by this process. The researchers then introduce endothelial cells to vascularize the tissue. 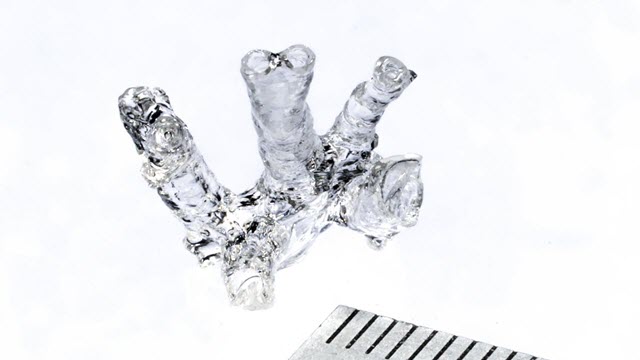 The researchers have shown that it's possible to create a tissue construct measuring several centimeters, which is a clinically useful size. Examples of their work include a valve similar to a heart valve, a meniscus and a complex-shaped part of the femur. They were also able to build interlocking structures.

"Unlike conventional bioprinting—a slow, layer-by-layer process—our technique is fast and offers greater design freedom without jeopardizing the cells' viability," says Damien Loterie, an LAPD researcher and one of the study's coauthors.

The researchers' work is a real game changer. "The characteristics of human tissue depend to a large extent on a highly sophisticated extracellular structure, and the ability to replicate this complexity could lead to a number of real clinical applications," says Paul Delrot, another coauthor. Using this technique, labs could mass-produce artificial tissues or organs at unprecedented speed. This sort of replicability is essential when it comes to testing new drugs in vitro, and it could help obviate the need for animal testing—a clear ethical advantage as well as a way of reducing costs.

"This is just the beginning. We believe that our method is inherently scalable towards mass fabrication and could be used to produce a wide range of cellular tissue models, not to mention medical devices and personalized implants," says Christophe Moser, the head of the LAPD.

The researchers plan to market their groundbreaking technique through a spin-off.