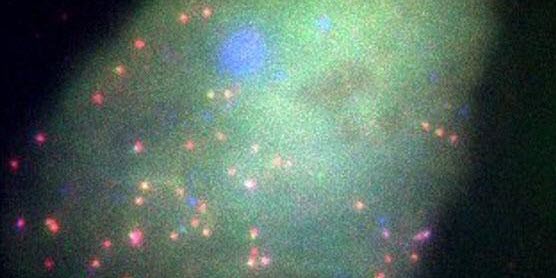 Infectious viruses come in many shapes and sizes and use slightly different attack mechanisms to make humans and animals sick. But all viruses share something in common: They can only do damage by replicating inside the cells of another organism—their host.

This broad, fundamental process of how viruses trick host cells into making copies of the virus has had a team of Colorado State University (CSU) scientists captivated for several years. A collaboration between the labs of Monfort Professor Tim Stasevich, in the Department of Biochemistry and Molecular Biology, and associate professor Brian Munsky, in the Department of Chemical and Biological Engineering, is on a mission to understand, in visual detail and with mathematical precision, all aspects of viral attack strategies, including how viruses invade host cell protein-making machinery. Their work, supported by grants from the National Institute of General Medicine and the W. M. Keck Foundation, could provide insight into predicting and fighting back against all manner of viral diseases.

For the first time ever, the team has shown an important mechanism in this host-attacking process, at the single-molecule level in living cells, and they have reproduced these behaviors in computational models. Their new experiments and models, published in Nature Structural and Molecular Biology, reveal in unprecedented detail how viruses initiate translation of genetic material into proteins.

Since viruses do not encode their own replication machinery, they hijack that of their host cells by stealing cellular machines called ribosomes, which are essential for making proteins from the genetic material found in RNA. Many viral genomes contain special RNA structures called internal ribosome entry sites, or IRES, that capture ribosomes from the host, forcing those ribosomes to make viral proteins.

The sensor combines the relevant bits of virus (not the whole virus) that interact with and steal host ribosomes, along with two distinct protein tags that glow the moment RNA is translated. First author and graduate student Amanda Koch spent more than a year developing the sensor, with the goal of looking at host protein RNA translation, and virus-related RNA translation, at the same time.

Luis Aguilera, a postdoctoral researcher in the Munsky group, built a detailed computational model to reproduce Koch's fluorescence microscopy videos. By analyzing Koch's data through the lens of dozens of hypotheses and millions of possible combinations, Aguilera discovered complex biochemical mechanisms that the biochemists couldn't directly see. His models showed that both healthy human RNA and viral RNA fluctuate between states that actively express proteins and those that are silent.

The Stasevich and Munsky teams envision that the combination of their unique biochemical sensors and detailed computational analyses will provide powerful tools to understand, predict, and control how future drugs might work to inhibit viral translation without affecting host translation.

As the researchers look ahead to the future, they have their sights next set on COVID-19. Although SARS-CoV-2 does not contain an IRES, according to Koch "our biosensor is modular and can easily incorporate pieces of SARS-CoV-2 to explore how it uniquely hijacks host replication machinery during infection."

"We are proving, more and more, that we can look at these nuanced dynamics of how viruses are sneaking past their hosts to infect a lot of cells and make us sick," Koch said.

- This press release was originally published on the CSU website