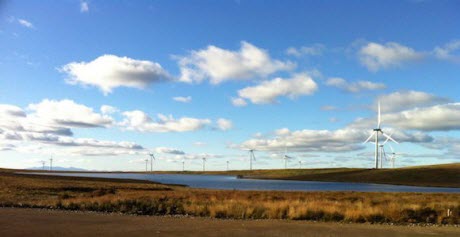 Boosts to solar and wind energy could help put us back on track to keep warming below the 2C target.Photo courtesy of the University of MelbourneThe latest comprehensive analysis of national plans to address climate change after 2020 shows the world will not reach its target of keeping warming to below 2C off pre-industrial levels.

Instead, the globe could suffer a median rise of between 2.6 and 3.1C by 2100 according to the Intended Nationally Determined Contributions (INDCs) submitted in preparation for the 2015 climate talks in Paris.

While it is an improvement from current policy and no-policy scenarios, it still falls short of the 2C target, not to mention the hopeful goal of 1.5C warming.

Study co-author associate professor Malte Meinshausen, the director of the Australian-German Climate and Energy College within the Faculty of Science at the University of Melbourne, said the world will not keep its promise of limiting global warming to below 2C and 1.5C without boosting ambition.

“The international community achieved unparalleled success with the Paris Agreement—charting out the common path towards a zero carbon economy in the second half of the century,” he said.

“But national policies now have to follow the international momentum.”

He attended the Paris talks and is one of the world’s most respected climate policy scientists.

Associate professor Meinshausen and his research team looked over 189 INDCs for the study—submitted both before and after the Paris summit—and analyzed the aggregate reduction in greenhouse gases.

The INDCs are not finite and can be amended until the point when the Paris agreement is ratified and then every five years as part of the agreement’s ‘ratcheting-up’ mechanism.

Despite the current INDCs being insufficient, the study also indicates that the 2°C target is still achievable.

To get the world onto an economically efficient 2°C pathway, the study points to additional initiatives in the solar energy, wind energy, forestry, and methane sectors, targets for the international aviation and maritime transport sectors and development of sustainable biomass in combination with carbon capture and storage (CCS).

“The challenges associated with departing from the fossil fuel path is one side of the coin,” Meinshausen said.

“But there is an immense opportunity on the horizon, if Australia embraces a vision of becoming an energy superpower in a zero carbon world.”

The study, which involved an international team of scientists from Austria, Germany, China, the Netherlands, Switzerland, South Africa, Brazil, and Australia, has been published in latest edition of the journal Nature.