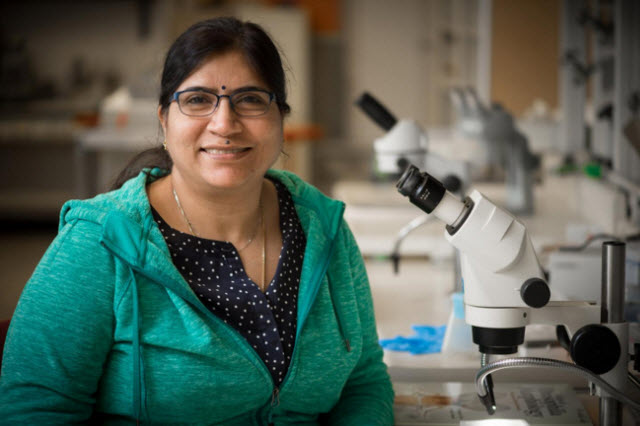 (East Lansing, MI)—What does Brad Pitt have in common with a fruit fly? His Hollywood hairstyles cover a prominent cowlick—the swirl of hair that that is caused by a patterning mechanism also active in our two-winged friends—that similarly feature "polarized" hair patterns.

In new research led by Michigan State University and featured in the current issue of Scientific Reports, researchers have discovered that these polarity genes, which do more than create cowlicks, are regulated by a tumor suppressor protein. On the macro scale, their presence can be seen in feather and fish scale patterns. On the cellular level, they are directly regulated by a cancer protein, the retinoblastoma tumor suppressor protein.

Tumor suppressors, such as retinoblastoma, are guardians of our cells that control cell division, DNA repair and cellular suicide signals—all are important tools in fighting cancer. In examining genes that have the retinoblastoma protein associated with them on the chromosomes, Sandhya Payankaulam, lead author and MSU research assistant professor, discovered that polarity genes in the fruit fly Drosophila are controlled by retinoblastoma protein.

"We know that the retinoblastoma protein controls cell division, policing the activity of oncogenes, genes that can potentially cause cancer, but our study suggests that this protein also may control cell migration, which is thrown out of whack by diseases such as cancer," said Payankaulam, who works in David Arnosti's and Bill Henry's biochemistry and molecular biology labs.

Most cells in our body show a polarized organization that is important to carry out specialized functions, such as transporting nutrients across cells of the gut, sticking to each other to provide support and making larger scale patterns seen in hair, such as cowlicks.

Polarity specifies the front and rear end of a cell, which is absolutely essential for proper migration from one place during development. Control of this migration is lost when cancer cells move about the body during metastasis, at which point the disease becomes difficult to treat.

"A great deal of research on cell polarity is directed toward understanding how polarity proteins interact with each other in cells," Arnosti said. "Until now, people neglected the regulation of polarity genes, thinking them to be regulated in a rather humdrum manner similar to 'housekeeping' genes that are devoted to basic cellular functions. Our work challenges this view and raises an important question relevant to development of new cancer diagnosis and therapies."

Cancer diagnosis and therapies in people, of course. Since fruit flies are essentially tiny people with wings, in terms of genetics, these model organisms can play a key role in advancing human medicine. From analysis of data from human cells, the researchers believe that retinoblastoma plays a similar role in humans, possibly contributing to cancer metastasis.

Payankaulam showed that the fruit fly retinoblastoma protein regulates the polarity genes important for this process, and loss of the fly protein induced misoriented wing hairs, generating an unkempt appearance.

With collaborators at the University of Toronto, the team showed that such defects in establishment of polarity also were found in other tissues, indicating that retinoblastoma protein has a general responsibility for polarity regulation.

This research was funded by the National Institutes of Health.

Michigan State University has been working to advance the common good in uncommon ways for more than 150 years. One of the top research universities in the world, MSU focuses its vast resources on creating solutions to some of the world's most pressing challenges, while providing life-changing opportunities to a diverse and inclusive academic community through more than 200 programs of study in 17 degree-granting colleges.