EUGENE, Ore.—If you have trouble sleeping, the neurons in your brain may be firing like those in roundworms randomly seeking food in the absence of clues, says University of Oregon biologist Shawn R. Lockery.

That connection is proposed in a theoretical neuroscience paper co-authored by 12 researchers at 10 institutions that is in the journal eLife. The research—14 years in the making—was led by Lockery and supported by the National Institutes of Health.

As humans sleep, neurons fire randomly in between brief, alternating states of wakefulness and sleep. Such fragmentation is heightened in sleep disorders.

The fragmentation as seen in the worms—the nematode Caenorhabditis elegans—offers a new framework to identify genetic and physiological underpinnings of the neural circuitry involved in sleep, the research team concluded. The nematode brain is the smallest known to science, containing just 302 neurons and making it a simple model from which to gather basic information, Lockery said. 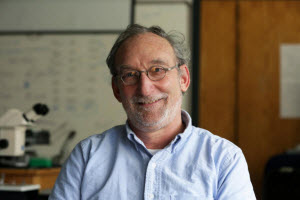 Shawn LockeryPhoto Courtesy of: Dustin Whitaker"Our field has a complete wiring diagram of this worm's brain," said Lockery, a member of the UO Institute of Neuroscience. "You can find the same neuron in any animal you look into and learn to understand how individual neurons function."

Researchers in Lockery's lab tested the predictability of mathematically driven equations about random search strategies in the brain. To do so, the worms were removed from access to their usual food—bacteria in rotting vegetables—and placed on clean petri dishes with no sensory clues as to where a meal is located.

Initially, the movements of the worms and the neural networks involved were mapped as the worms crawled forward, paused, reversed, and then resumed their search in another direction.

"Every animal faces the need to find food," Lockery said. "In some instances food is undetectable until you basically fall on it: birds looking for marine invertebrates in the sand will move about and peck until they find their meal. This is called random search."

Humans, too, from hunter-gatherers to those who engage in technologically advanced fishing, exhibit similar random-search behaviors but, "no one has known how the nervous system controls this," Lockery said.

With the mapping done, researchers used lasers to knock out neurons. They expected the worms to spend more time in reverse when neurons linked to forward movement were eliminated, or vice versa. Instead, the reaction was symmetrical. Shorter times were found in both forward and reverse movements.

"There are centers in the human brain stem that promote wakefulness and sleep," Lockery said. "They are coupled just like the system we see in the worms. This involves clusters of neurons that are fighting against each other to be active. We constantly wake up and go back to sleep, but we don't remember it. Sleep is random, just the way the worm's movement is."

Researchers have done similar experiments in rats and mice where neurons related to sleep states were manipulated. The findings are consistent.

"The same paradoxical effect that we found in our worms also occurs in these other organisms," Lockery said. "This line of research suggests that we now have a simple way to try to understand how this fragmentation occurs. That's the first step in understanding how medical science might be able to pursue therapeutics that could mitigate extreme cases of fragmentation."

Co-authors with Lockery were: William M. Roberts, biology professor emeritus, and Serge Faumont, a senior research associate in the Institute of Neuroscience, both of the UO; Steven B. Augustine of University of Pennsylvania School of Nursing in Philadelphia; Kristy J. Lawton of Reed College in Portland, Oregon; Theodore H. Lindsay of Caltech; Tod R. Thiele of the University of Toronto; Eduardo Izquierdo of Indiana University; Rebecca A. Lindsay of Children's Hospital Los Angeles; Matthew C. Britton of the University of Minnesota; Navin Pokala of the New York Institute of Technology; and Cornelia I. Bargmann of the Howard Hughes Medical Institute at The Rockefeller University in New York.