LA JOLLA—By adolescence, your brain already contains most of the neurons that you’ll have for the rest of your life. But a few regions continue to grow new nerve cells—and require the services of cellular sentinels, specialized immune cells that keep the brain safe by getting rid of dead or dysfunctional cells.

Now, Salk scientists have uncovered the surprising extent to which both dying and dead neurons are cleared away, and have identified specific cellular switches that are key to this process. The work was detailed in Nature on April 6, 2016.

Video courtesy of the Salk Institute

“We discovered that receptors on immune cells in the brain are vital for both healthy and injured states,” says Greg Lemke, senior author of the work, a Salk professor of molecular neurobiology and the holder of the Françoise Gilot-Salk Chair. “These receptors could be potential therapeutic targets for neurodegenerative conditions or inflammation-related disorders, such as Parkinson’s disease.” 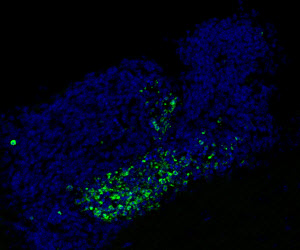 An accumulation of dead cells (green spots) is seen in the subventricular zone (SVZ)—a neurogenic region—of the brain in a mouse lacking the receptors Mer and Axl. (Blue staining marks all cells.) No green spots are seen in the SVZ from a normal mouse.Image Credit: Salk InstituteTwo decades ago, the Lemke lab discovered that immune cells express critical molecules called TAM receptors, which have since become a focus for autoimmune and cancer research in many laboratories. Two of the TAM receptors, dubbed Mer and Axl, help immune cells called macrophages act as garbage collectors, identifying and consuming the over 100 billion dead cells that are generated in a human body every day.

For the current study, the team asked if Mer and Axl did the same job in the brain. Specialized central nervous system macrophages called microglia make up about 10 percent of cells in the brain, where they detect, respond to and destroy pathogens. The researchers removed Axl and Mer in the microglia of otherwise healthy mice. To their surprise, they found that the absence of the two receptors resulted in a large pile-up of dead cells, but not everywhere in the brain. Cellular corpses were seen only in the small regions where the production of new neurons—neurogenesis—is observed.

Many cells die normally during adult neurogenesis, but they are immediately eaten by microglia. “It is very hard to detect even a single dead cell in a normal brain, because they are so efficiently recognized and cleared by microglia,” says Paqui G. Través, a co-first author on the paper and former Salk research associate. “But in the neurogenic regions of mice lacking Mer and Axl, we detected many such cells.”

When the researchers more closely examined this process by tagging the newly growing neurons in mice’s microglia missing Mer and Axl, they noticed something else interesting. New neurons that migrate to the olfactory bulb, or smell center, increased dramatically without Axl and Mer around. Mice lacking the TAM receptors had a 70 percent increase in newly generated cells in the olfactory bulb than normal mice.

Video courtesy of the Salk Institute

How—and to what extent—this unchecked new neural growth affects a mouse’s sense of smell is not yet known, according to Lemke, though it is an area the lab will explore. But the fact that so many more living nerve cells were able to migrate into the olfactory bulb in the absence of the receptors suggests that Mer and Axl have another role aside from clearing dead cells—they may actually also target living, but functionally compromised, cells. 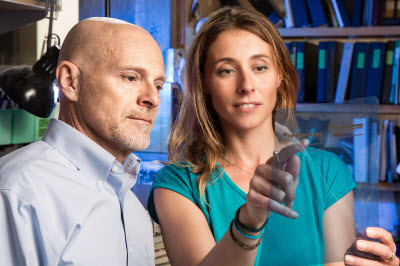 Greg Lemke and Lawrence FourgeaudPhoto Credit: Salk Institute“It appears as though a significant fraction of cell death in neurogenic regions is not due to intrinsic death of the cells but rather is a result of the microglia themselves, which are killing a fraction of the cells by engulfment,” says Lemke. “In other words, some of these newborn neuron progenitors are actually being eaten alive.”

This isn’t necessarily a bad thing in the healthy brain, Lemke adds. The brain produces more neurons than it can use and then prunes back the cells that aren’t needed. However, in an inflamed or diseased brain, the destruction of living cells may backfire.

The Lemke lab did one more series of experiments to understand the role of TAM receptors in disease: they looked at the activity of Axl and Mer in a mouse model of Parkinson’s disease. This model produces a human protein present in an inherited form of the disease that results in a slow degeneration of the brain. The team saw that Axl was far more active in this setting, consistent with other studies showing that increased Axl is a reliable indicator of inflammation in tissues.

In the area of a brain lacking Mer and Axl a ‘trail of death’ is apparent from the migratory pathway from the neurogenic region to the olfactory bulb (smell center of the brain). Blue staining marks all cells, and green spots are dead cells. No green spots are seen in the same section from a normal mouse.Image Credit: Salk InstituteBut the researchers were in for a surprise when they removed Axl and Mer from the Parkinson’s mice. Instead of being worse off compared to mice with the disease but with normal microglia, the mice missing Axl and Mer actually lived longer. This may be because Axl and Mer target and destroy sick, dysfunctional neurons. In the presence of disease, there could be more dysfunctional neurons than normal, so Axl and Mer may be prompting the destruction of too many neurons, in effect hastening the disease.

“It seems that we can modify the course of the disease in an animal model by manipulating Axl and Mer,” says Lawrence Fourgeaud, a co-first author on the paper and former Salk research associate. The team cautions that more research needs to be done to determine if modulating the TAM receptors could be a viable therapy for neurodegenerative disease involving microglia.

The work was supported by the National Institutes of Health, the Leona M. and Harry B. Helmsley Charitable Trust, the Howard Hughes Medical Institute, and the Nomis, H.N. and Frances C. Berger, Fritz B. Burns, HKT, Waitt, Rita Allen, and Hearst foundations.