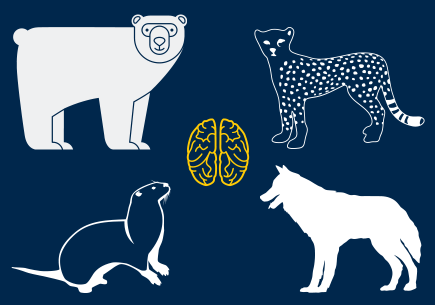 Image courtesy of University of MichiganANN ARBOR—Just how smart are animals? It is believed that animals whose brains are large relative to their body size are highly intelligent—and now a new study supports that theory.

Animals such as river otters, wolves, bears, African wild dogs, and cheetahs tried to open steel mesh "puzzle boxes" baited with food and adjusted to their body size. The animals opened the puzzle box using a lever, and if they were successful, they received a food reward in the box.

When researchers monitored if these zoo animals used brute force or actually learned how to open the box, many animals improved their performance with experience.

"This suggests that the animals were learning as they were repeating behaviors that made them successful in previous attempts," said study co-author and U-M researcher Ben Dantzer.

Species with large brains were more successful than species with relatively small brains.

"This study provides long-sought experimental evidence for the assumption that animals with bigger brains are better problem solvers," said Dantzer, assistant professor of psychology, and ecology and evolutionary biology.

Overall, 35 percent of animals successfully solved the puzzle, with bears as the most triumphant at completing the task 70 percent of the time. Meerkats and mongooses were the least successful. Although these species also differed in body size, it was their brain size relative to how big they were that primarily influenced whether they solved the puzzle, Dantzer said.

Variables such as the social group size for animals, their manual dexterity or work effort failed to predict success at opening the boxes, the study showed.

"This finding also highlights that species that are more social or live in big social groups are not necessarily better problem-solvers than those that live alone," Dantzer said.

Related article: Researchers Solve Puzzle of How We Learn

Researchers say the findings represent a step forward in understanding the evolution of problem solving in mammalian carnivores when the majority of work on this topic has focused on primates, fish, and birds.

"The results of this study provide important support for the claim that brain size reflects an animal's problem-solving abilities and enhance our understanding of why larger brains evolved in some species," said Sarah-Benson-Amram, the study's lead author and an assistant professor at the University of Wyoming.

The study's authors also included Kay Holekamp and Greg Stricker of Michigan State University and Eli Swanson of the University of Minnesota.

The findings appear in the current issue of Proceedings of the National Academy of Sciences.