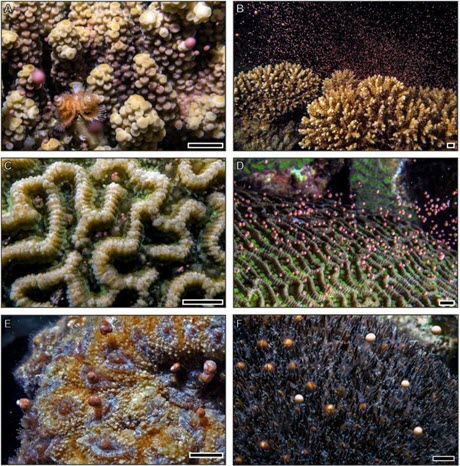 In-situ spawning of the studied species. (A) At ~30 minutes prior to spawning, Acropora eurystoma colonies can be observed in a 'setting' mode, in which egg-sperm bundles are already visible at the mouth-opening of each polyp. (B) Synchronized whole-colony spawning of A. eurystoma. (C) Partial spawning of Platygyra lamellina without the formation of egg-sperm bundles, in contrast to (D) Synchronized whole-colony spawning of egg-sperm bundles by P. lamellina. (E) Acanthastrea echinata spawning and (F) a male Galaxea fascicularis colony. Scale bars indicate ~1 cm.Credit: Tel Aviv UniversityCoral reefs are among the most diverse and productive ecosystems on our planet. But due to climate change and other human stressors, reef-building corals that reproduce by means of broadcast-spawning—the simultaneous release of eggs and sperm into open water—may now be under threat of extinction.

According to the research, led by professor Yossi Loya and PhD candidate Tom Shlesinger of TAU's School of Zoology and published in Science on September 6, the breakdown in coral spawning synchrony has led to a dearth of new recruits and stagnant aging populations, creating circumstances for extinction.

Successful fertilization, which can take place only within this narrow time window, has led to the evolution of a precise spawning synchrony. Such synchronicity relies on environmental cues: sea temperature, solar irradiance, wind, the phase of the moon, and the time of sunset.

In 2015, the researchers initiated a long-term monitoring of coral spawning in the Gulf of Eilat/Aqaba. Over four years, they performed 225 night field surveys lasting three to six hours each during the annual coral reproductive season from June to September and recorded the number of spawning individuals of each coral species.

"We found that, in some of the most abundant coral species, the spawning synchrony had become erratic, contrasting both the widely accepted paradigm of highly synchronous coral spawning and studies performed on the exact same reefs decades ago," says Shlesinger.

The researchers then investigated whether this breakdown in spawning synchrony translated into reproductive failure. They mapped thousands of corals within permanent reef plots, then revisited these plots every year to examine and track changes in the coral community—i.e., how many corals of a given species had died compared with new juveniles recruited to the reef.

"Although it appeared that the overall state of the coral reefs at Eilat was quite good and every year we found many new corals recruiting to the reefs, for those species that are suffering from the breakdown in spawning synchrony, there was a clear lack of recruitment of new juvenile generations, meaning that some species that currently appear to be abundant may actually be nearing extinction through reproductive failure," says Shlesinger.

"Several possible mechanisms may be driving the breakdown in spawning synchrony that we found," Prof. Loya concludes. "For example, temperature has a strong influence on coral reproductive cycles. In our study region, temperatures are rising fast, at a rate of 0.31 degrees Celsius per decade, and we suggest that the breakdown in spawning synchrony reported here may reflect a potential sublethal effect of ocean warming. Another plausible mechanism may be related to endocrine (hormonal) disrupting pollutants, which are accumulating in marine environments as a result of ongoing human activities that involve pollution."

"Regardless of the exact cause leading to these declines in spawning synchrony, our findings serve as a timely wake-up call to start considering these subtler challenges to coral survival, which are very likely also impacting additional species in other regions," says Shlesinger. "On a positive note, identifying early-warning signs of such reproductive mismatches will contribute to directing our future research and conservation efforts toward the very species that are at potential risk of decline, long before they even display any visible signs of stress or mortality." 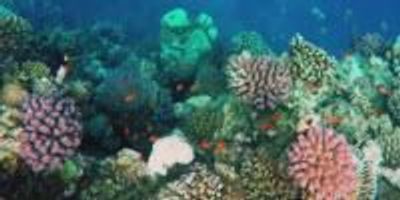