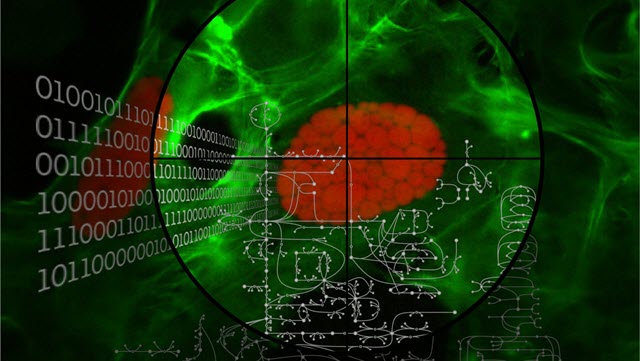 The researchers specifically removed over 1,300 individual genes in the malaria parasite Plasmodium (in red, host cells in green) and were thus able to identify many new targets in the pathogen.Credit: Institut für Zellbiologie, Universität Bern

Despite great efforts in medicine and science, more than 400,000 people worldwide are still dying of malaria. The infectious disease is transmitted by the bite of mosquitoes infected with the malaria parasite Plasmodium. The genome of the parasite is relatively small with about 5,000 genes. In contrast to human cells, Plasmodium parasites only have a single copy of each individual gene. If one removes a gene from the entire genome of the parasite, this leads therefore directly to a change in the phenotype of the parasite.

An international consortium led by professors Volker Heussler from the Institute of Cell Biology (ICB) at the University of Bern and Oliver Billker from the Umeå University in Sweden and formerly at the Sanger Institute in Great Britain has taken advantage of this fact. The researchers have carried out a genome-wide gene deletion study on malaria parasites: They specifically removed over 1,300 individual genes, observed the effects during the entire life cycle of the parasite, and were thus able to identify many new targets in the pathogen. The present study was published in the journal Cell.

The researchers used a malaria mouse model established at the Institute of Cell Biology at the University of Bern. Each of the 1300 parasite genes was replaced by an individual genetic code to analyze how the removal of the individual genes affects the parasite. The use of individual codes allows to study many parasites simultaneously and thus drastically shortens the time of their analysis. After three years of research, the international consortium succeeded in systematically screening the genome of the parasite in all life cycle stages.

"The deletion screen carried out jointly with the Sanger Institute enabled us to identify hundreds of targets, particularly in the parasite's metabolism," said Rebecca Stanway from the ICB, one of the lead authors of this study.

To systematically analyze the large number of identified metabolic genes, the Berne researchers have joined forces with professor Vassily Hatzimanikatis of the EPFL in Lausanne and professor Dominique Soldati-Favre of the University of Geneva to form the "MalarX" consortium, which is financially supported by the Swiss National Science Foundation. Using data of the malaria genome screen, the group at EPFL has calculated models that show essential metabolic pathways of the parasite.

"Thanks to these models, it is now possible to predict which of the previously unexplored genes are vital for the parasite and are therefore suitable targets for malaria control," adds model expert Anush Chiappino-Pepe from the EPFL in Lausanne.

Some of these predictions were then experimentally confirmed by the Bern researchers in close collaboration with the group of professor Chris Janse at the University of Leiden in the Netherlands.

"The genome-wide screen with the corresponding metabolic models represents a breakthrough in malaria research," said Magali Roques of the team in Bern.

"Our results will support many malaria researchers worldwide. They can now concentrate on essential parasite genes and thus develop efficient drugs and vaccines against various stages of the parasite's life," added Dr. Ellen Bushell, former scientist at the Sanger Institute.

According to Volker Heussler, this research approach was only possible by a combination of the enormous sequencing and cloning capacities at the Sanger Institute and the extraordinary infrastructure at the ICB in Bern where the entire life cycle of the malaria parasite is established. In addition, the ICB is equipped with an exceptional range of high-performance microscopes, which enable top-level research on the various life cycle stages of the parasite. Thanks to this excellent infrastructure, the laboratory of Volker Heussler has already published many internationally recognized studies on the early phase of parasite infection.

Twenty-two international scientists from the fields of molecular biology, parasitology, statistics, and mathematical modeling participated in this project.

"This illustrates the effort in conducting this study, analyzing the data and model the experimental findings to bring them in a meaningful context," said Volker Heussler.