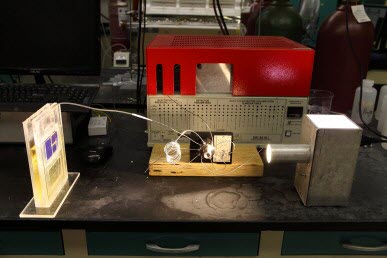 The finding is reported in the July 29 issue of Science and was funded by the National Science Foundation and the U.S. Department of Energy. A provisional patent application has been filed.

Unlike conventional solar cells, which convert sunlight into electricity that must be stored in heavy batteries, the new device essentially does the work of plants, converting atmospheric carbon dioxide into fuel, solving two crucial problems at once. A solar farm of such “artificial leaves” could remove significant amounts of carbon from the atmosphere and produce energy-dense fuel efficiently.

“The new solar cell is not photovoltaic—it’s photosynthetic,” says Amin Salehi-Khojin, assistant professor of mechanical and industrial engineering at UIC and senior author on the study.

“Instead of producing energy in an unsustainable one-way route from fossil fuels to greenhouse gas, we can now reverse the process and recycle atmospheric carbon into fuel using sunlight,” he said.

While plants produce fuel in the form of sugar, the artificial leaf delivers syngas, or synthesis gas, a mixture of hydrogen gas and carbon monoxide. Syngas can be burned directly, or converted into diesel or other hydrocarbon fuels.

The ability to turn CO2 into fuel at a cost comparable to a gallon of gasoline would render fossil fuels obsolete.

Chemical reactions that convert CO2 into burnable forms of carbon are called reduction reactions, the opposite of oxidation or combustion. Engineers have been exploring different catalysts to drive CO2 reduction, but so far such reactions have been inefficient and rely on expensive precious metals such as silver, Salehi-Khojin said.

“What we needed was a new family of chemicals with extraordinary properties,” he said. 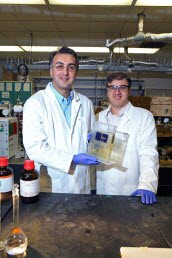 Amin Salehi-Khojin (left), UIC assistant professor of mechanical and industrial engineering, and postdoctoral researcher Mohammad Asadi with their breakthrough solar cell that converts atmospheric carbon dioxide directly into syngas.Photo courtesy of the University of Illinois at ChicagoSalehi-Khojin and his coworkers focused on a family of nano-structured compounds called transition metal dichalcogenides—or TMDCs—as catalysts, pairing them with an unconventional ionic liquid as the electrolyte inside a two-compartment, three-electrode electrochemical cell.

The best of several catalysts they studied turned out to be nanoflake tungsten diselenide.

In fact, he said, the new catalyst is 1,000 times faster than noble-metal catalysts—and about 20 times cheaper.

Other researchers have used TMDC catalysts to produce hydrogen by other means, but not by reduction of CO2. The catalyst couldn’t survive the reaction.

“The active sites of the catalyst get poisoned and oxidized,” Salehi-Khojin said. The breakthrough, he said, was to use an ionic fluid called ethyl-methyl-imidazolium tetrafluoroborate, mixed 50-50 with water.

“The combination of water and the ionic liquid makes a co-catalyst that preserves the catalyst’s active sites under the harsh reduction reaction conditions,” Salehi-Khojin said.

The UIC artificial leaf consists of two silicon triple-junction photovoltaic cells of 18 square centimeters to harvest light; the tungsten diselenide and ionic liquid co-catalyst system on the cathode side; and cobalt oxide in potassium phosphate electrolyte on the anode side.

When light of 100 watts per square meter—about the average intensity reaching the Earth’s surface—energizes the cell, hydrogen and carbon monoxide gas bubble up from the cathode, while free oxygen and hydrogen ions are produced at the anode.

Related Article: Solar Cells that Can Face Almost Any Direction and Keep Themselves Clean

“The hydrogen ions diffuse through a membrane to the cathode side, to participate in the carbon dioxide reduction reaction,” said Asadi.

The technology should be adaptable not only to large-scale use, like solar farms, but also to small-scale applications, Salehi-Khojin said. In the future, he said, it may prove useful on Mars, whose atmosphere is mostly carbon dioxide, if the planet is also found to have water.

“This work has benefitted from the significant history of NSF support for basic research that feeds directly into valuable technologies and engineering achievements,” said NSF program director Robert McCabe.

“The results nicely meld experimental and computational studies to obtain new insight into the unique electronic properties of transition metal dichalcogenides,” McCabe said. “The research team has combined this mechanistic insight with some clever electrochemical engineering to make significant progress in one of the grand-challenge areas of catalysis as related to energy conversion and the environment.”

Co-authors with Asadi and Salehi-Khojin are Kibum Kim, Aditya Venkata Addepalli, Pedram Abbasi, Poya Yasaei, Amirhossein Behranginia, Bijandra Kumar, and Jeremiah Abiade of UIC’s mechanical and industrial engineering department, who performed the electrochemical experiments and prepared the catalyst under NSF contract CBET-1512647; Robert F. Klie and Patrick Phillips of UIC’s physics department, who performed electron microscopy and spectroscopy experiments; Larry A. Curtiss, Cong Liu, and Peter Zapol of Argonne National Laboratory, who did Density Functional Theory calculations under DOE contract DE-ACO206CH11357; Richard Haasch of the University of Illinois at Urbana-Champaign, who did ultraviolet photoelectron spectroscopy; and José M. Cerrato of the University of New Mexico, who did elemental analysis.