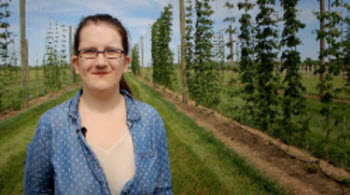 One that doesn’t come immediately to mind: hops.

But New Jersey hop farmer Beau Byrtus thinks a Rutgers study on how to cultivate the aromatic plant that plays a prominent role in beer production could help change that.

“I think it is very much a fledgling industry now. There are only a handful of us,” said Byrtus, who co-founded Oast House Hop Farm in Wrightstown four years ago. “It’s hugely beneficial anytime Rutgers puts it name on something. It lends credibility to what we’re doing.”

Related Article: The Value of UV-Vis Spectrophotometry in Craft Brewing

Now in its second year, the two-year Rutgers study—funded by a grant from the USDA Northeast Sustainable Agriculture Research and Education—focuses on identifying the best practices for growing and analyzing hops. The project, which includes creating and maintaining a quarter-acre trial hops plot at the Snyder Research Farm in Pittstown, is run by two Rutgers doctoral candidates in plant biology, Megan Muehlbauer and Robert Pyne, under the direction Jim Simon, a professor of biology who directs the Rutgers new-use agriculture and natural products program.

“We were getting calls about hops: Is it economical? What are the risks? How do you produce it? When do you harvest it?” Simon said. “Hops are expensive to grow [$5,000 to establish the Snyder Farm plot] and come with a lot of risk and liability. When people in New Jersey ask us questions, as a land grant university it is our responsibility to find answers and seek solutions.”

While there are members of the Rutgers Cooperative Extension Service that focus on whether hop production can be profitable for growers, the Rutgers study is focused is on examining practices that lead to improved yields and understanding the best practices such as time of harvesting and postharvest handling that can lead to premium quality crops.

This isn’t hops’ first go-round in New Jersey. During the Colonial days, the mid-Atlantic region was the epicenter of hops production in the United States. Disease and prohibition during the early 1900s sent hops to the country’s northwestern corner. Today Washington, Idaho, and Oregon dominate the U.S. hops market, accounting for 31,848 of the 35,224 total acres grown annually.

So why bother bringing the sensitive, labor-intensive crop back to New Jersey? Two words: Craft breweries.

A new brewery opens almost every day in this country. The number in New Jersey has grown from less than a dozen 15 years ago to 61 today, said Gene Muller, founder and president of Flying Fish Brewing Co. in Somerdale and treasurer of the Garden State Craft Brewers Guild. If Rutgers’ study finds that quality hops can be cultivated here, said Muller, it could become a springboard for increased production—especially with the ready-made brewery market.

“Some of these hops can go for $12 or $15 a pound, and that’s at volume,” said Muller, who is also a Rutgers-Camden alumnus. “That could be a nice cash crop for farmers instead of competing with everyone growing zucchini or corn. I think the value of this project is to see or prove that New Jersey is suitable for that.”

A similar Rutgers hops study conducted nearly 15 years ago by Bill Bamka, an agricultural agent, with Rutgers Burlington County Cooperative Extension proved just the opposite, said Muehlbauer. Bamka’s study found the crop had too many economic pains—mostly harvesting issues—without gains—low prices and demand. But technological advancements made since then combined with the brewery boom could make a significant difference in its viability as a niche crop here now, she said.

Local hops are still hand harvested, which is a time-consuming method, but as local growers see potential in the crop, she said, talk of creating a state hops co-op that shares expensive harvesting or pelletizing equipment has grown.

“The new interest from craft breweries could drive up the price, but they will only purchase these plants if they meet specific quality standards,” Muehlbauer said.

And that’s the second study’s other lynchpin: the university's access to improved equipment and offer to analyze the chemical and aromatic contents of local farmers’ hops. 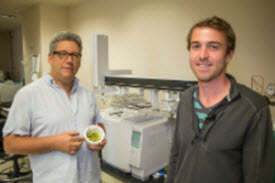 Jim Simon, a professor of new-use agriculture at Rutgers, and Robert Pyne, a doctoral candidate in plant biology, prepare to analyze the chemical and aromatic contents of female hops cones.Photo credit: Cameron Bowman“We use a Shimadzu analytical GC/MS with Headspace Capture, which has a unique accessory that allows us to place into it a hop cone, and without digesting, extracting, or distilling we are able to capture the gases emitted from the hops—those same aromas you would detect when holding it up to your nose to smell,” Simon said. “Just as chili peppers vary in hotness or color, hops vary in aroma and acids.”
Brewers need to know exactly what alpha acid level and aromas are going into their products to keep them consistent.

“Hops are the spice of beer. They add bitterness, the character of a beer that quenches thirst. They add aroma and flavor—anything from citrus to pine to grassy to peppery,” said Muller, who said hop-forward beers, such as IPAs have grown in popularity during the last decade. “Without knowing the alpha acids in hops, you can’t brew for the right bitterness or aroma.”

While other East Coast universities are also exploring hops production, Simon said Rutgers’ study is one of only a few offering these key analytical services to commercial growers.

Byrtus took advantage of Rutgers analytical service last year and plans to do so again this year. Before, he had to dry a pound of each variety of his hops and ship it to a company in Washington for analysis, which wasted hops, shipping costs and, above all, time.

“It would take two weeks to get data back from Washington. I remember thinking, ‘This was inordinately long and isn’t going to help us at all,’ ” said Byrtus. “With Rutgers, we are talking about turnaround time of 48 hours to get my crop analyzed, harvested and to my brewer. That’s the game changer.”