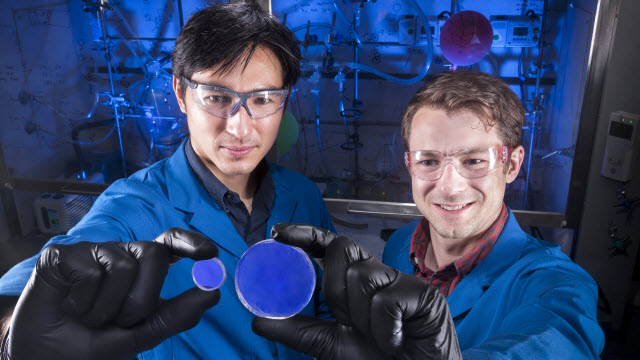 LIVERMORE, Calif. — Taking inspiration from an unusual source, a Sandia National Laboratories team has dramatically improved the science of scintillators—objects that detect nuclear threats. According to the team, using organic glass scintillators could soon make it even harder to smuggle nuclear materials through America’s ports and borders.

The Sandia Labs team developed a scintillator made of an organic glass which is more effective than the best-known nuclear threat detection material while being much easier and cheaper to produce. Organic glass is a carbon-based material that can be melted and does not become cloudy or crystallize upon cooling. Successful results of the Defense Nuclear Nonproliferation project team’s tests on organic glass scintillators are described in a paper published this week in The Journal of the American Chemical Society.

Sandia Labs material scientist and principal investigator Patrick Feng started developing alternative classes of organic scintillators in 2010. Feng explained he and his team set out to “strengthen national security by improving the cost-to-performance ratio of radiation detectors at the front lines of all material moving into the country.” To improve that ratio, the team needed to bridge the gap between the best, brightest, most sensitive scintillator material and the lower costs of less sensitive materials.

The team designed, synthesized and assessed new scintillator molecules for this project with the goal of understanding the relationship between the molecular structures and the resulting radiation detection properties. They made progress finding scintillators able to indicate the difference between nuclear materials that could be potential threats and normal, non-threatening sources of radiation, like those used for medical treatments or the radiation naturally present in our atmosphere.

With LEDs, a known source and amount of electrical energy is applied to a device to produce a desired amount of light. In contrast, scintillators produce light in response to the presence of an unknown radiation source material. Depending on the amount of light produced and the speed with which the light appears, the source can be identified.

Despite these differences in the ways that they operate, both LEDs and scintillators harness electrical energy to produce light. Fluorene is a light-emitting molecule used in some types of LEDs. The team found it was possible to achieve the most desirable qualities—stability, transparency, and brightness—by incorporating fluorene into their scintillator compounds.

Pushing past crystals and plastics 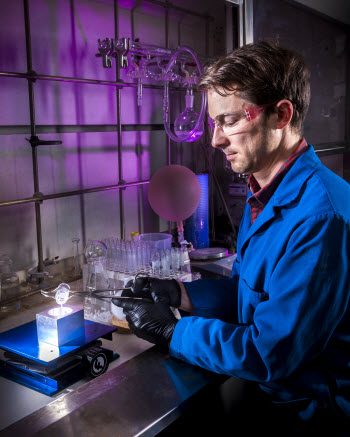 Sandia National Laboratories researcher Joey Carlson demonstrates the ease of casting an organic glass scintillator, which takes only a few minutes as compared to growing a trans-stilbene crystal, which can take several months.Photo credit: Randy WongThe gold standard scintillator material for the past 40 years has been the crystalline form of a molecule called trans-stilbene, despite intense research to develop a replacement. Trans-stilbene is highly effective at differentiating between two types of radiation: gamma rays, which are ubiquitous in the environment, and neutrons, which emanate almost exclusively from controlled threat materials such as plutonium or uranium. Trans-stilbene is very sensitive to these materials, producing a bright light in response to their presence. But it takes a lot of energy and several months to produce a trans-stilbene crystal only a few inches long. The crystals are incredibly expensive, around $1,000 per cubic inch, and they’re fragile, so they aren’t commonly used in the field.

Instead, the most commonly used scintillators at borders and ports of entry are plastics. They’re comparatively inexpensive at less than a dollar per cubic inch, and they can be molded into very large shapes, which is essential for scintillator sensitivity. As Feng explained, “The bigger your detector, the more sensitive it’s going to be, because there’s a higher chance that radiation will hit it.”

Despite these positives, plastics aren’t able to efficiently differentiate between types of radiation—a separate helium tube is required for that. The type of helium used in these tubes is rare, non-renewable and significantly adds to the cost and complexity of a plastic scintillator system. And plastics aren’t particularly bright, at only two-thirds the intensity of trans-stilbene, which means they do not do well detecting weak sources of radiation.

Another challenge: The initial glass compounds the team made weren’t stable. If the glasses got too hot for too long, they would crystallize, which affected their performance. Feng’s team found that blending compounds containing fluorene to the organic glass molecules made them indefinitely stable. The stable glasses could then also be melted and cast into large blocks, which is an easier and less expensive process than making plastics or trans-stilbene.

From the lab to the ports

The work thus far shows indefinite stability in a laboratory, meaning the material does not degrade over time. Now, the next step toward commercialization is casting a very large prototype organic glass scintillator for field testing. Feng and his team want to show that organic glass scintillators can withstand the humidity and other environmental conditions found at ports.

The National Nuclear Security Administration has funded the project for an additional two years. This gives the team time to see if they can use organic glass scintillators to meet additional national security needs.

Going forward, Feng and his team also plan to experiment with the organic glass until it can distinguish between sources of gamma rays that are non-threatening and those that can be used to make dirty bombs.