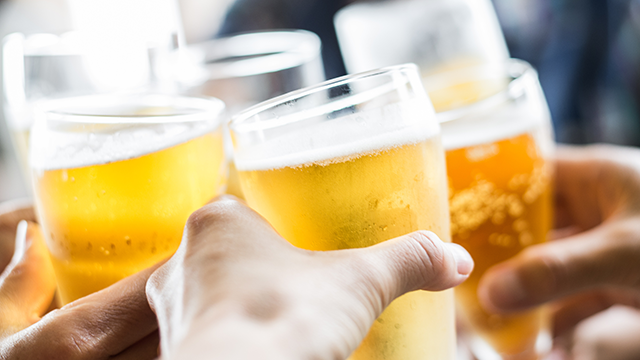 Chemists at the University of Bristol have made the first steps towards making sustainable petrol using beer as a key ingredient.

It is commonly accepted that there is an urgent need for sustainable alternatives to fossil fuels for transportation to replace diesel and petrol.

One of the most widely used sustainable alternatives to petrol world-wide is bioethanol—in the United States gasoline is typically sold as a blend with up to 10 percent ethanol.

It is also known that ethanol is not an ideal replacement for petrol as it has issues such as lower energy density, it mixes too easily with water, and can be fairly corrosive to engines.

A much better fuel alternative is butanol but this is difficult to make from sustainable sources.

Scientists from the University of Bristol's School of Chemistry have been working for several years to develop technology that will convert widely-available ethanol into butanol.

This has already been demonstrated in laboratory conditions with pure, dry ethanol but, if this technology is to be scaled up, it needs to work with real ethanol fermentation broths.

These contain a lot of water (about 90 percent) and other impurities, so the new technology has to be developed to tolerate that.

Professor Duncan Wass, whose team led the research, said: "The alcohol in alcoholic drinks is actually ethanol—exactly the same molecule that we want to convert into butanol as a petrol replacement.

"So alcoholic drinks are an ideal model for industrial ethanol fermentation broths—ethanol for fuel is essentially made using a brewing process.

If our technology works with alcoholic drinks (especially beer which is the best model) then it shows it has the potential to be scaled up to make butanol as a petrol replacement on an industrial scale."

The technology used to convert ethanol into butanol is called a catalyst—these are chemicals which can speed up and control a chemical reaction and are already widely used in the petrochemical industry.

The Bristol team's key finding is that their catalysts will convert beer (or specifically, the ethanol in beer) into butanol.

In demonstrating that catalysts work with a 'real' ethanol mixture, the team have demonstrated a key step in scaling this technology up to industrial application.

Wass added: "We wouldn't actually want to use beer on an industrial scale and compete with potential food crops.

But there are ways to obtain ethanol for fuel from fermentation that produce something that chemically is very much like beer—so beer is an excellent readily available model to test our technology."

Another advantage of this approach is that it is quite similar to many existing petrochemical processes.

The next step in terms of application is to build this larger scale process and, based on previous processes, this could take as long as five years even if everything went well. From a scientific point of view, the team are now trying to understand what makes their catalysts so successful.

Wass said: "Turning beer into petrol was a bit of fun, and something to do with the leftovers of the lab Christmas party, but it has a serious point.

Beer is actually an excellent model for the mixture of chemicals we would need to use in a real industrial process, so it shows this technology is one step closer to reality."