Archaeologists from the Universities of York, Cambridge, and UCL have identified rare human bones from the UK dating to the Late Mesolithic era (around 4000 BC, just prior to the arrival of farming in Britain) using an innovative new bone collagen analysis technique. 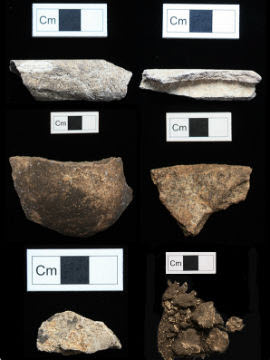 Selection of bone fragments from Cnoc Coig.Photo credit: Sophy CharltonSurprisingly, there is a near absence of human remains in Britain from this period. However, a small island in the Inner Hebrides—Oronsay—is unique as it holds the remains of six human individuals.

Analyzing further tiny bone fragments from the site of Cnoc Coig on Oronsay, researchers used bone collagen (protein) sequences to determine the species of 20 previously unidentifiable bone fragments. Of these, 14 were confirmed as human: a remarkable finding given the scarcity of human remains from this era.

The study also used collagen to conduct radiocarbon dating and stable isotope analysis on the bone samples, in order to enhance understanding of the diet of Britain's last forager groups and their relationship to the earliest evidence for agriculture.

This new evidence allows researchers to shed better light on our understanding of the transition from hunter-gatherer-fishers to agricultural food production.

Based on previous findings, it was assumed that hunter-gatherer foraging was fairly rapidly replaced with the arrival of agriculture in Britain, resulting in a sudden dietary shift.

However, this recent discovery points to the contrary, with evidence that in some parts of the UK, diets were based largely on marine foods even after the arrival of agriculture.

Dr Sophy Charlton, lead author on the paper and now a research associate at the Natural History Museum in London, explains: “Analyzing previously unidentified bone fragments shows us that both hunter-gatherer-fisher and farming lifestyles potentially co-existed on the West coast of Scotland for several hundred years. Further analysis has the potential to greatly clarify our understanding of the transition to agriculture in Western Scotland and more broadly across Britain.”

“Our findings also illustrate how information can be obtained from previously overlooked material. So much research potential lies dormant within ‘unidentifiable’ prehistoric bone fragments, and there is consequently significant potential for the future application of this method to other prehistoric sites.”