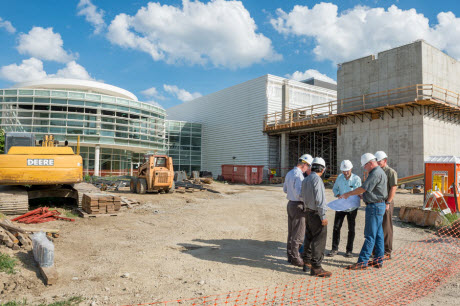 Building project managers and scientific leads confer at the site of a new clean room under construction at Argonne National Laboratory. When completed, the lab will enable scientists and engineers to build extremely sensitive detectors — such as those capable of detecting light from the early days of the universe.Photo credit: Mark Lopez/Argonne National LaboratoryIt takes a very, very clean room to build a detector sensitive enough to see the light from the beginning of the universe.

Work is underway at the U.S. Department of Energy's (DOE's) Argonne National Laboratory on a new "clean room." The new lab will be specially suited for building parts for ultra-sensitive detectors—such as those to carry out improved X-ray research, or for the South Pole Telescope to search for light from the early days of the universe.

"This will be a unique facility, and a wonderful investment for the future of the laboratory," said Supratik Guha, who heads the Center for Nanoscale Materials, a DOE Office of Science User Facility adjacent to where the new space will be located.

Clean rooms are a special kind of laboratory that is heavily filtered and cleaned, so that no free-floating particles interfere with delicate work. Take a cube of air one foot on a side: In a normal room in your house or office, this cube contains about one million free-floating particles of dust, dirt and other materials. In the clean room, it's no more than 100.

This environment is what you need to build detectors that can detect the tiniest amount of energy striking the surface.

"Even a few stray specks of dust in the niobium can throw off the design for these detectors," said Marcel Demarteau, who heads the High Energy Physics Division at Argonne and will be a key user of the new lab. 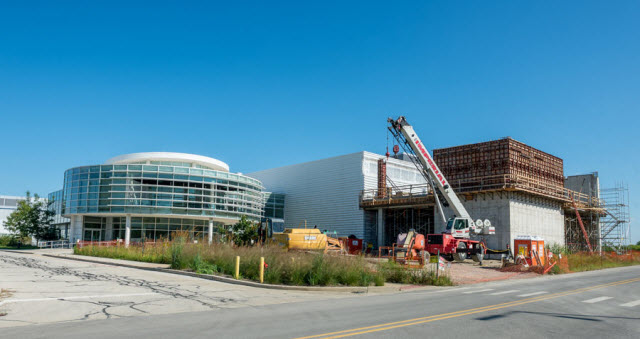 One use for such detectors is in the South Pole Telescope in Antarctica, one of several telescopes searching for light waves that have traveled throughout the universe since the moments after the Big Bang. This kind of light is called the Cosmic Microwave Background radiation.

Because the light has traveled across space for the 13.8 billion years since the universe began, it has encountered all sorts of obstacles that slightly change its power spectrum—galaxy clusters, patches of dark matter, even our own atmosphere. "We have to correct for these to map the Cosmic Microwave Background signature we're looking for, but these small perturbations themselves hold an enormous amount of very valuable information about the composition of the universe," Demarteau said.

The most sensitive instruments today to find such signals are detectors made from superconductors. Superconductors are extremely sensitive materials that change properties dramatically when their temperature is raised even a tiny bit, and scientists can build components that react to specific frequencies to detect the signature of the Cosmic Microwave Background. The new clean room should allow researchers to build even more sensitive detectors—think of a camera that takes 150-pixel pictures versus one that can take 500,000-pixel images.

The same technology will also offer researchers a chance to get better close-ups of the atomic makeup of objects being studied at the Advanced Photon Source, a DOE Office of Science User Facility at Argonne where scientists use X-rays to study everything from car fuel injectors to proteins that play roles in disease.

The Advanced Photon Source sends beams of high-energy X-rays at a sample of whatever scientists are studying: a new solar cell material, a sample of volcanic glass from Greenland, a protein involved in photosynthesis. The X-rays hit the sample and scatter off in all directions. Very sensitive detectors pick up that scatter and reveal the chemical and atomic layout of the sample. The better the detector, the more information you can get; so Advanced Photon Source scientists are always looking for new ways to improve those detectors.

Related Article: Researchers Model Birth of Universe in One of Largest Cosmological Simulations Ever Run

"The type of detector we want to build, nobody makes commercially: so we have to build our own," said Thomas Cecil, an engineer with the Advanced Photon Source. The new clean room will allow them to experiment with new kinds of transition edge sensors, which he said they hope could eventually improve the sensitivity by one or even two orders of magnitude compared to traditional silicon-based detectors.

Building such technology is an excruciatingly delicate process, in which they lay down multiple coatings just a few nanometers thick—less than a hundredth of the diameter of a human hair—of superconducting materials and etch patterns into them. Then they repeat the process all over again, for up to 15 layers.

The detector itself is so precise that it's operated at temperatures colder than outer space to achieve maximum sensitivity. "It's an excellent opportunity for us to push the boundaries of what's possible," Cecil said.

Other potential uses, Demarteau said, include quantum computing as well as homeland security: building detectors that can pick out the particular signature of a specific kind of radiation, to detect if terrorists are carrying a dirty bomb made out of, for example, cesium-137.

The project broke ground in May and is expected to be completed in mid-2017.