Jun 01, 2017|2 min readInstitute of Molecular Biotechnology of the Austrian Academy of Sciences

Scientists have combined organoids with bioengineering for the first time. Using small microfilaments, they show improved tissue architecture that mimics human brain development more accurately and allows more targeted studies of brain development and its malfunctions, as reported in the current issue of Nature Biotechnology. 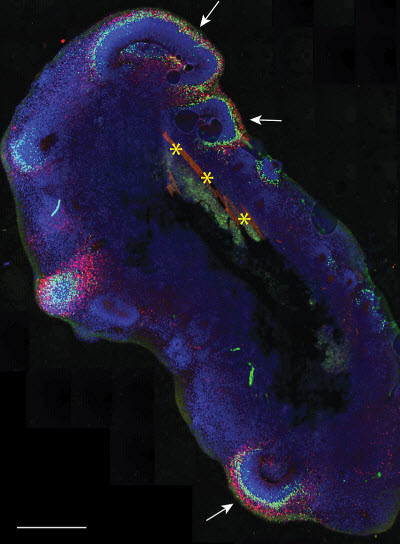 Bioengineered organoids or so called enCORs are supported by a floating scaffold of PLGA-fiber microfilaments.Image courtesy of the Molecular Biotechnology of the Austrian Academy of SciencesA few years ago, Jürgen Knoblich and his team at the Institute of Molecular Biotechnology of the Austrian Academy of Sciences (IMBA) have pioneered brain organoid technology. They developed a method for cultivating three-dimensional brain-like structures, so called cerebral organoids, in a dish. This discovery has tremendous potential as it could revolutionize drug discovery and disease research. Their lab-grown organ models mimic early human brain development in a surprisingly precise way, allowing for targeted analysis of human neuropsychiatric disorders, that are otherwise not possible. Using this cutting-edge methodology, research teams around the world have already revealed new secrets of human brain formation and its defects that can lead to microcephaly, epilepsy, or autism.

In a new study published in Nature Biotechnology, scientists from Cambridge and Vienna present a new method that combines the organoid method with bioengineering. The researchers use special polymer fibers made of a material called PLGA) to generate a floating scaffold that was then covered with human cells. By using this ground-breaking combination of engineering and stem cell culture, the scientists are able to form more elongated organoids that more closely resemble the shape of an actual human embryo. By doing so, the organoids become more consistent and reproducible.

"This study is one of the first attempts to combine organoids with bioengineering. Our new method takes advantage of and combines the unique strengths of each approach, namely the intrinsic self-organization of organoids and the reproducibility afforded by bioengineering. We make use of small microfilaments to guide the shape of the organoids without driving tissue identity," explains Madeline Lancaster, group leader at MRC Laboratory of Molecular Biology in Cambridge and first author of the paper.

This guided self-organization allows engineered cerebral organoids, or enCORs, to more reproducibly form cerebral cortical tissue but maintain the tissue complexity and overall size that comes about when the tissues are still allowed to develop according to intrinsic developmental programs. As a result, enCORs also develop later tissue architecture that more faithfully models the organization seen in an actual developing brain.

Jürgen Knoblich, deputy scientific director of IMBA and last author on the paper, elucidates the implications of the novel technology:  “An important hallmark of the bioengineered organoids is their increased surface to volume ratio. Neurons ‘have more space’ and can properly migrate and position themselves in a layer that in an actual developing brain would later become the grey matter. Because of their improved tissue architecture, enCORs can allow for the study of a broader array of neurological diseases where neuronal positioning is thought to be affected, including lissencephaly (smooth brain), epilepsy, and even autism and schizophrenia.”