Video courtesy of the University of California, Riverside

RIVERSIDE, Calif. — A team of researchers and students at the University of California, Riverside has created a Lego-like system of blocks that enables users to custom make chemical and biological research instruments quickly, easily, and affordably. The system of 3D-printed blocks can be used in university labs, schools, hospitals, and anywhere there is a need to create scientific tools.

The blocks, which are called Multifluidic Evolutionary Components (MECs) because of their flexibility and adaptability, are described July 20th in the journal PLOS ONE. Each block in the system performs a basic task found in a lab instrument, like pumping fluids, making measurements, or interfacing with a user. Since the blocks are designed to work together, users can build apparatus—like bioreactors for making alternative fuels or acid-base titration tools for high school chemistry classes—rapidly and efficiently.  The blocks are especially well suited for resource-limited settings, where a library of blocks could be used to create a variety of different research and diagnostic tools. 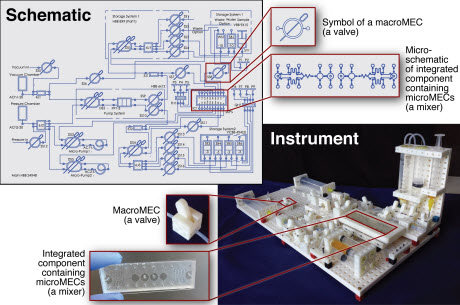 An overview of designing and building a custom lab instrument using the Multifluidic Evolutionary Component (MEC) system created at UC Riverside.Image courtesy of the University of California, Riverside The project is led by Douglas Hill, a graduate student working with William Grover, assistant professor of bioengineering in UCR’s Bourns College of Engineering. Before joining UCR’s PhD program in bioengineering, Hill worked for 20 years in the field of electronics design, where he used electronic components that were designed to work with each other. He was surprised to see there was no similar set of components in the life sciences.

“When Doug came to UC Riverside, he was a little shocked to find out that bioengineers build new instruments from scratch,” Grover said. “He’s used to putting together a few resistors and capacitors and making a new circuit in just a few minutes. But building new tools for life science research can take months or even years. Doug set out to change that.”

Armed with a grant from the National Science Foundation’s Instrument Development for Biological Research program, Hill and Grover began to develop their building blocks. They enlisted help from UC Riverside undergraduates, who have designed new blocks and built instruments using them. Thus far, more than 50 students from across the UCR campus have participated, creating an extensive system of over 200 MEC blocks and a system of schematics that guide assembly of the MEC building blocks into finished instruments.

Grover said in addition to its functionality and affordability, the MEC system offers students a unique learning experience as they work together to create instruments one piece at a time.

“This is a truly interdisciplinary project—we’ve had computer science students write the code that runs the blocks, bioengineering students culture cells using instruments built from the blocks, and even art students design the graphical interface for the software that controls the blocks,” he said.

“Once the students have created these instruments, they also understand how they work, they can ‘hack’ them to make them better, and they can take them apart to create something else.” 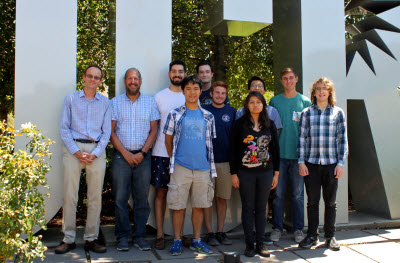 Left to right: William Grover, assistant professor of bioengineering at UC Riverside, and Douglas Hill, a graduate student in bioengineering, stand with some of the undergraduates who have worked on the MEC project.Photo courtesy of the University of California, RiversideGrover and Hill are now planning to pilot the MEC system in two California school districts, where it will support recently introduced ‘Next Generation Science Standards,’ a multi-state initiative to strengthen science education in K-12 schools.

“The Next Generation Science Standards require that science teachers provide their students with engineering experiences, but sometimes that’s hard for teachers to do, especially in biology and chemistry classes where they might not have the tools they need.  By using our blocks, the students can receive an engineering experience by designing, building, and refining their instruments, and also a science experience as they use their instruments to learn about biology and chemistry,” Grover said.

Hill said the team’s long-term goal is to make the MEC blocks available and affordable for others to use.

“As 3D printers become more mainstream, we’ll see them being used by schools and non-profits working in underserved communities, so ultimately we would like people to be able to use those printers to create their own MEC blocks and build the research and educational tools they need,” he said.