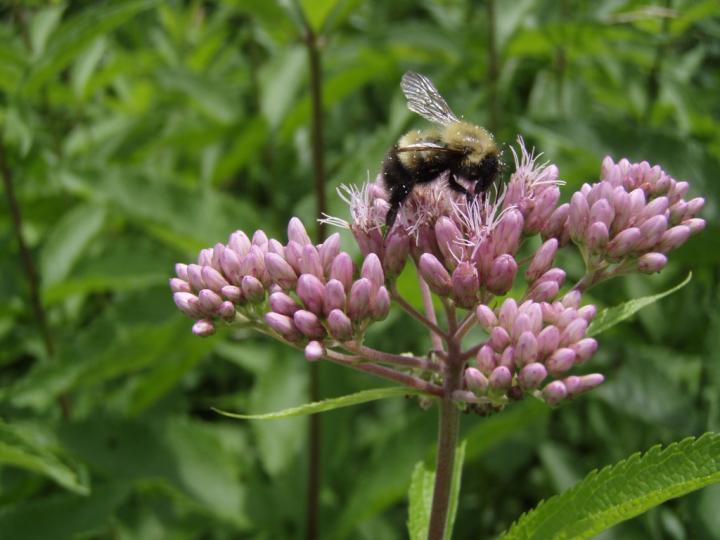 Global warming is putting the squeeze on bumblebees. In the most comprehensive study ever conducted of the impacts of climate change on these critical pollinators, scientists have discovered that global warming is rapidly shrinking the area where bumblebees are found in both North America and Europe. The new study is reported in the journal Science.Leif Richardson, UVM

Global warming is putting the squeeze on bumblebees. In the most comprehensive study ever conducted of the impacts of climate change on critical pollinators, scientists have discovered that global warming is rapidly shrinking the area where these bees are found in both North America and Europe.

Researchers examined more than 420,000 historical and current records of many species of bumblebees--and confirm that bumblebees are in steep decline at a continental scale because of climate change. The new research is reported in the journal Science.

This shrinking range is bad news for more than bees. "Bumblebees pollinate many plants that provide food for humans and wildlife," says Leif Richardson, a scientist at the University of Vermont who helped lead the new research. "If we don't stop the decline in the abundance of bumblebees, we may well face higher food prices, diminished varieties, and other troubles."

"Pollinators are vital for food security and our economy, and widespread losses of pollinators due to climate change will diminish both," stated Jeremy Kerr, a biologist from the University of Ottawa, who led the new study. "We need to figure out how we can improve the outlook for pollinators at continental scales, but the most important thing we can do is begin to take serious action to reduce the rate of climate change."

With climate change, many species of animals, including butterflies, have been observed to expand their territory: the northern edge of their range marches toward the North Pole--while the southern edge remains in place. Not so bumblebees. The team of fourteen scientists who conducted the new study found that northern populations of many bumblebee species are staying put--while the southern range edge is retreating away from the equator.

"This was a surprise," said Richardson, a bee expert at UVM's Gund Institute for Ecological Economics. "The bees are losing range on their southern margin and failing to pick up territory at the northern margin--so their habitat range is shrinking."

The new study shows that the culprit is not pesticides and it's not land use changes--two other major threats to bumblebee populations and health. Instead, the research shows clearly that this "range compression," as the scientists call it, tracks with warming temperatures.

The team also found that bumblebees are shifting to areas of habitat at higher elevation in response to climate change. "Moving upslope doesn't necessarily mean they've lost area there yet," said UVM's Richardson, "but, eventually, they may simply run out of hill."

To conduct their study, the scientist drew on geo-referenced databases from museum collections on both continents. In Vermont, Leif Richardson examined bee specimens at UVM's Zadock Thompson Zoological Collections.

Over the 110 years of records that the team examined, bumblebees have lost about 185 miles (300 km) from the southern edge of their range in Europe and North America, the scientists estimate. "The scale and pace of these losses are unprecedented," said Ottawa's Jeremy Kerr.

There may be an evolutionary explanation for the problems bumblebees now face. Many other species of insects originated and diversified in tropical climates; as temperatures warm, their evolutionary history may allow them to better adapt. Bumblebees, however have "unusual evolutionary origins in the cool Palearctic," the scientists write, which may help explain their rapid losses of terrain from the south and lagging expansion in the warming north.

To respond to this problem, the research team suggests that a dramatic solution be considered: moving bee populations into new areas where they might persist. This "assisted migration" idea has been considered--and controversial--in conservation biology circles for more than a decade, but is gaining support as warming continues.

"We need new strategies to help these species cope with the effects of human-caused climate change, perhaps assisting them to shift into northern areas," said Kerr. But the most important message of this study is "the need to halt or reverse climate warming," says Leif Richardson, a USDA National Institute of Food and Agriculture postdoctoral research fellow at UVM.

"These findings could spell trouble for many plants--including some crops, like blueberries--that depend on bumblebees for pollination," he said. "Bumblebees are crucial to our natural ecosystems."