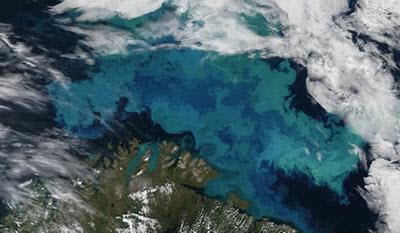 Satellite image of algae bloom in the Barents Sea.Image credit: Jeff Schmaltz, MODIS Rapid ResponsTeam, NASA/GSFCAn international research team has calculated the costs and benefits of calcification for phytoplankton and the impact of climate change on their important role in the world’s oceans.

Single-celled phytoplankton play a vital role in marine biogeochemical cycling, in marine food webs, and in the global climate system. Coccolithophores are a particular group that cover themselves with calcium carbonate shields, known as coccoliths. Some wrap themselves in an impenetrable coat of coccoliths, some make coccoliths in the form of sharp spikes, some use them as parasols against the sun, and some form funnel-shaped light collectors.

Related Article: Seaweeds Get Sick Too When They're Stressed

But this requires a lot of energy—and the price for the artful armor could rise further due to global change. With the help of a new model, the researchers analyzed the energetic costs and benefits of calcification. The results, published in the current issue of the journal Science Advances, suggest that the ecological niche for calcifying algae will become narrower in the future. 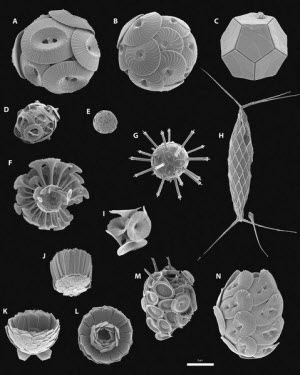 Diversity of coccolithophores.Image credit: Monteiro et al. Sci Adv 2016;2:e1501822“Presumably, the algae built their calcareous shells as a protection against predators. However, since the different structures had other benefits as well, a variety of forms was developed to make further use of these advantages,” explains Professor Ulf Riebesell, marine biologist at GEOMAR Helmholtz Centre for Ocean Research Kiel and co-author of the study.

So far, the high energetic costs have paid off: “Coccolithophorids have survived over 200 million years. But now it is questionable whether they are also able to withstand climate change,” says Professor Riebesell.

The 200 coccolithophore species produce up to ten per cent of the biomass in the oceans and keep the marine carbon cycle running. Stuck to their calcium carbonate platelets, organic matter sinks to the ocean floor—allowing surface layers to take up a new carbon dioxide from the atmosphere and process it.

Whether these unicellular multi-talented organisms will be able to fulfil their functions in the future, depends on how much extra energy they have to spend on calcification—and how their competitors in the food web react to ocean change. The amount of carbon dioxide dissolved in seawater is increasing due to fossil fuel emissions. This slightly stimulates photosynthesis.

On the other hand, the associated reduction in pH (ocean acidification) hampers calcification. “Compared to other planktonic organisms, coccolithophores will find themselves in a disadvantage. Their decline would also have an impact on the climate system,” says Dr Lennart Bach, second co-author of the study from GEOMAR. “Therefore, new model approaches such as ours are important in order to explore how increasing energy costs, as required for calcification, will pay off in the future.”

The other Southampton and Southampton-related authors were Samantha Gibbs and Colin Brownlee.

Professor Toby Tyrrell, Professor in earth system science at the University of Southampton and co-author of the study, said: “In the future ocean, the trade-off between changing ecological and physiological costs of calcification and their benefits will ultimately decide how this important group is affected by ocean acidification and global warming. There are signs that their distribution in the oceans is changing over time. If we understand better the costs and benefits of their distinguishing feature (coccoliths) then this should help us understand why their biogeography is shifting.”

The study's lead author, Dr Fanny Monteiro, lecturer and NERC research fellow from the School of Geographical Sciences at the University of Bristol, added: “Calcification in coccolithophores has high energy demand but brings multiple benefits enabling the currently observed diversity of their ecology and form.”

To better understand the purpose of the elaborate armor and assess to what extent they will suffer the consequences of global change, researchers from Germany, Great Britain, France, and the United States combined results from evolutionary history and cell biology studies, laboratory, field, and modeling experiments.